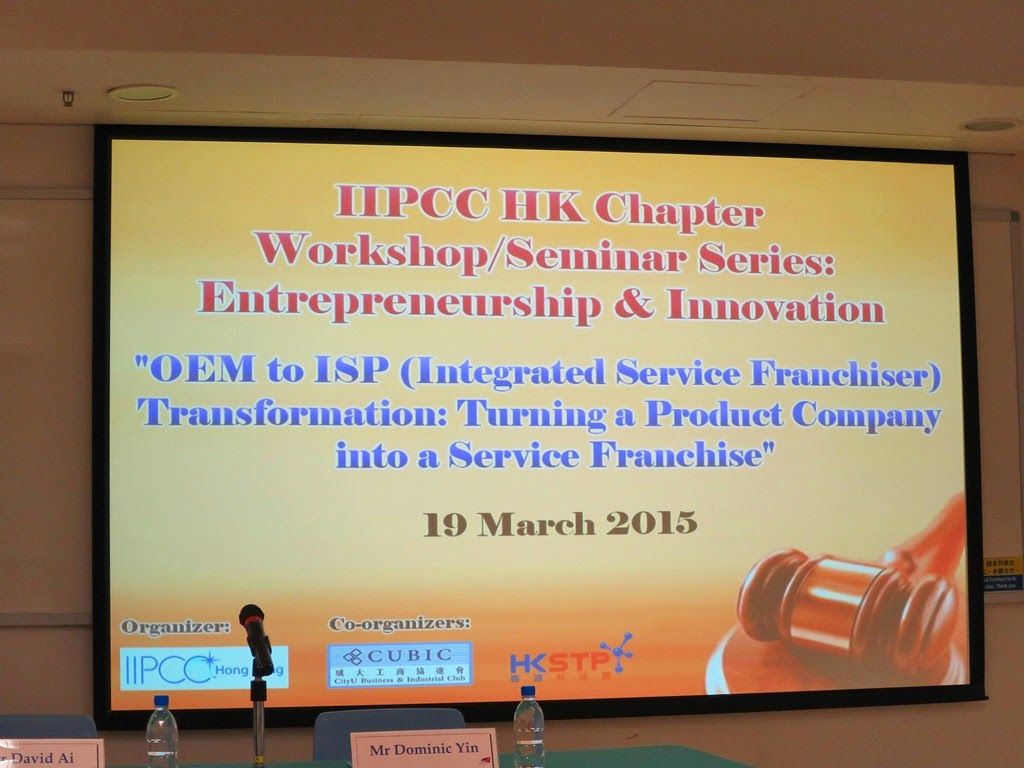 The guest speaker was Mr. Al Kwok who is Co-Founder of IIPCC Hong Kong Chapter and expert in semiconductor industry. He shared the topic “OEM to ISP (Integrated Service Franchiser) Transformation: Turing a Product Company into a Service Franchise”. Firstly, Mr. Al Kwok discussed the knowledge-based economic trend in USA and found that there had about 80% market value from intangible assets in 2005. (10 year ago!) 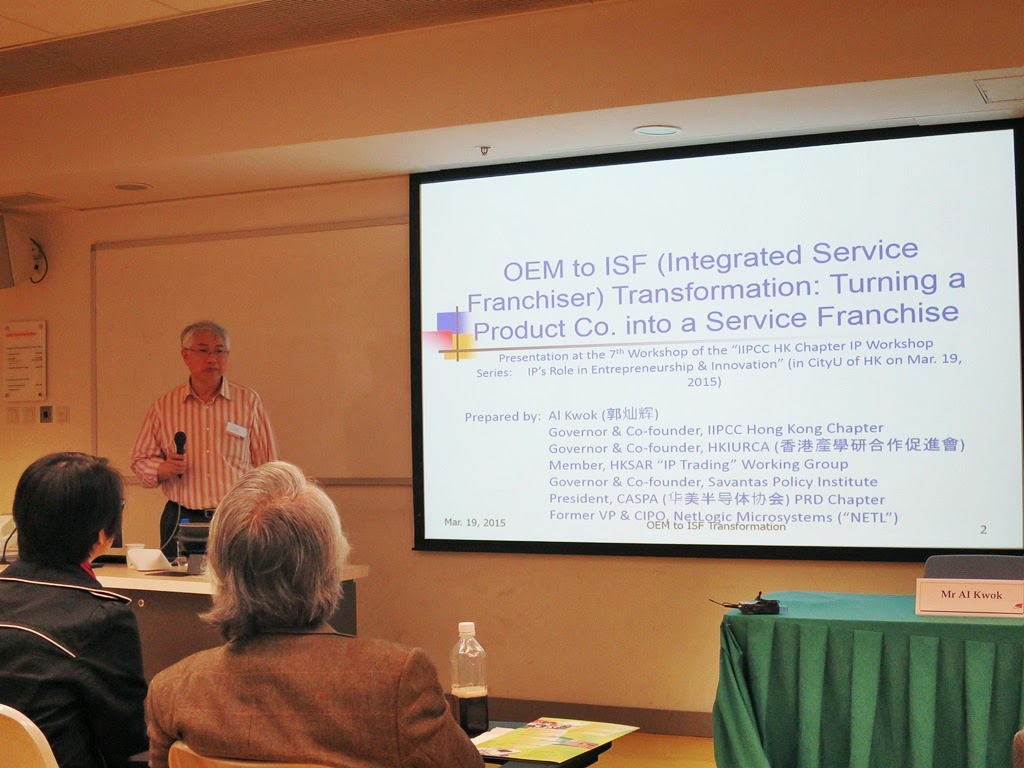 Then Mr. Al Kwok shared the Value Hierarchy Business Models. He said USA did not outsource in Application and IP level. The success strategy should have both Brand and Competency. 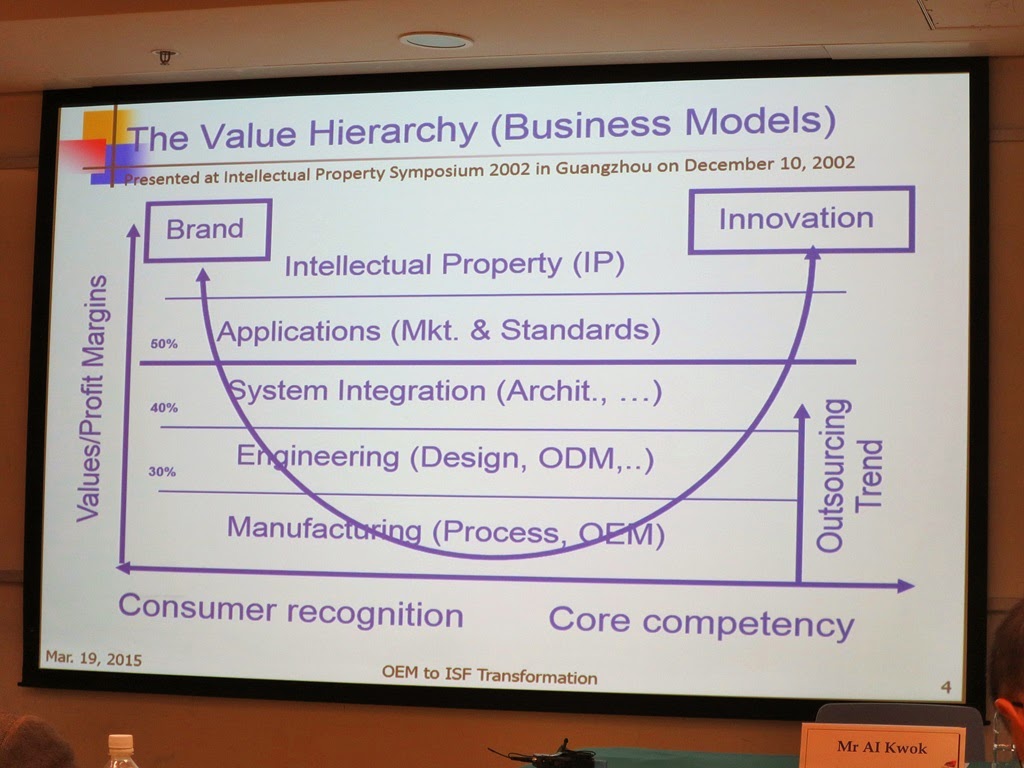 After that he briefed pillars for knowledge economy through the following table. In 1985, IC Economy obeyed Moore’s Law. In 2000, IT Economy obeyed Metcalfe’s Law (Value ~ n^2). Now, IP Economy may be followed TBDI (The Big Data Institute?) such as Apple iTunes to “Unified IP Pooling”. He also mentioned “Moore’s Law and Metcalfe’Law (acting on H/W and Network Platforms respectively) are fuelling on-going IT System/Business Process Re-engineering for global improvements (changes) like magma shaping Earth crust’s movements.” 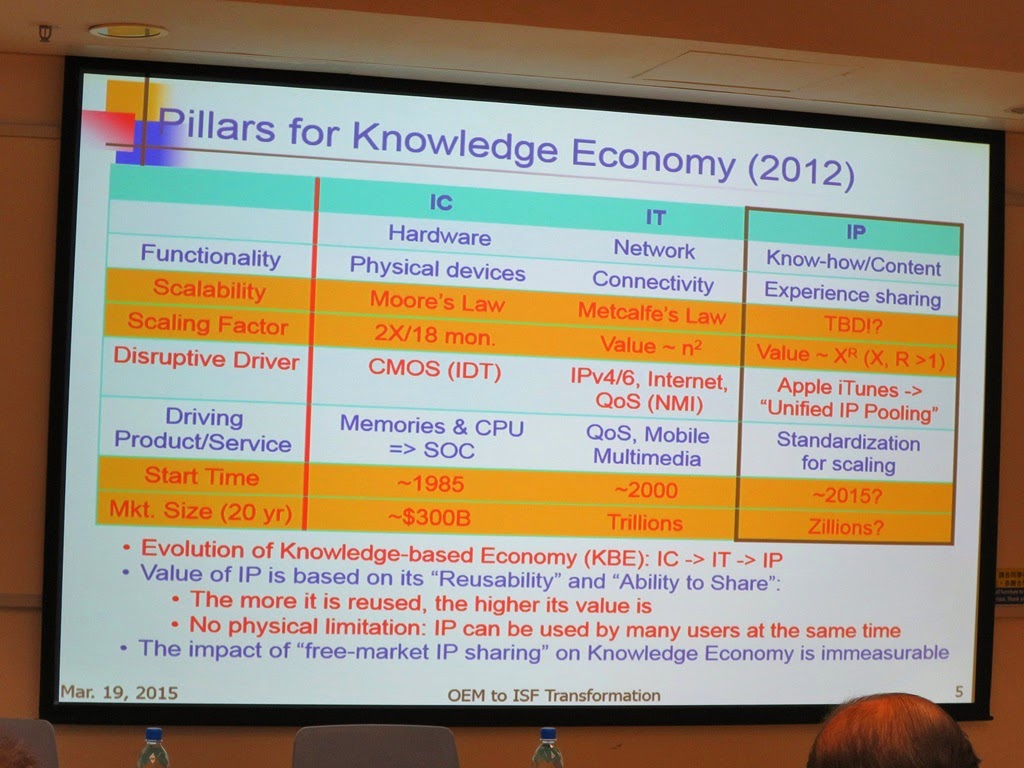 Mr. Al Kwok said “IT Services Mean Everything!” “IT proficiency + business domain knowledge” is a must! It would be inevitable future trend. He said more than 70% profit margin come from design win. Western promoted Supply-Chain Management (SCM) but seldom mention the Demand-Chain Management (DCM). Obviously, Demand-side profit is much higher than Supply-side. 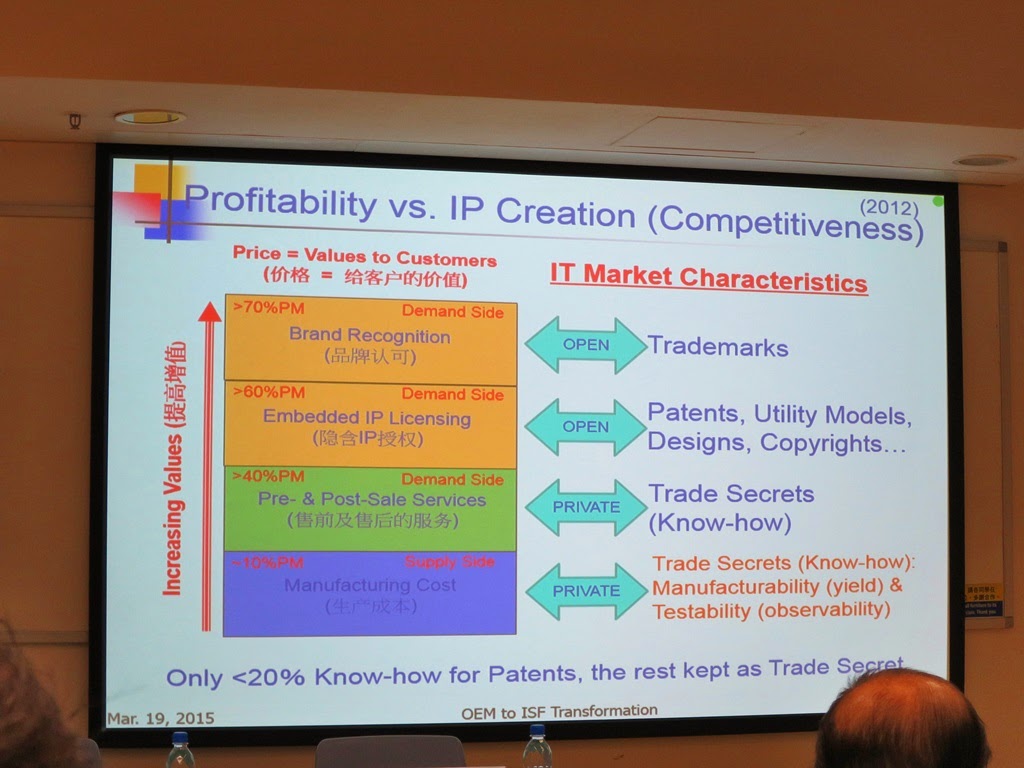 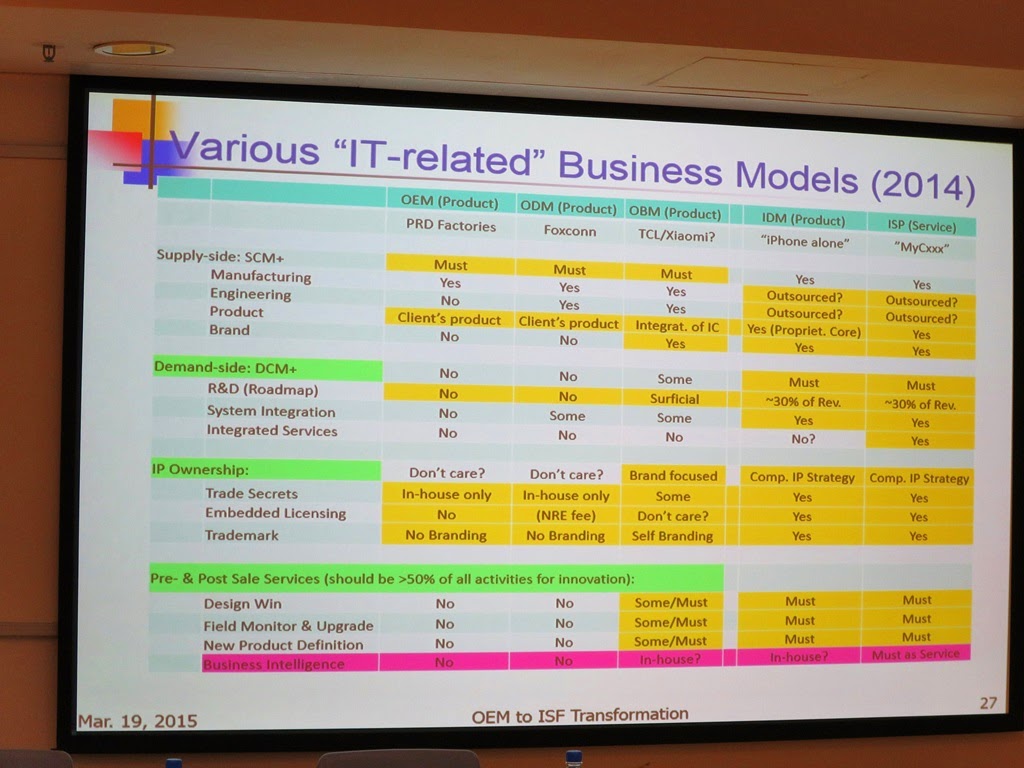 Mr. David Ai (Director of Knowledge Transfer Office, CityU and Co-Founder of IIPCC Hong Kong Chapter) summarized the talk and shared his story about customer experience of thermostat interface. He was trouble when set up the thermostat in new house until Google brought NEST. Mr. David Ai also mentioned the important of market dominant. 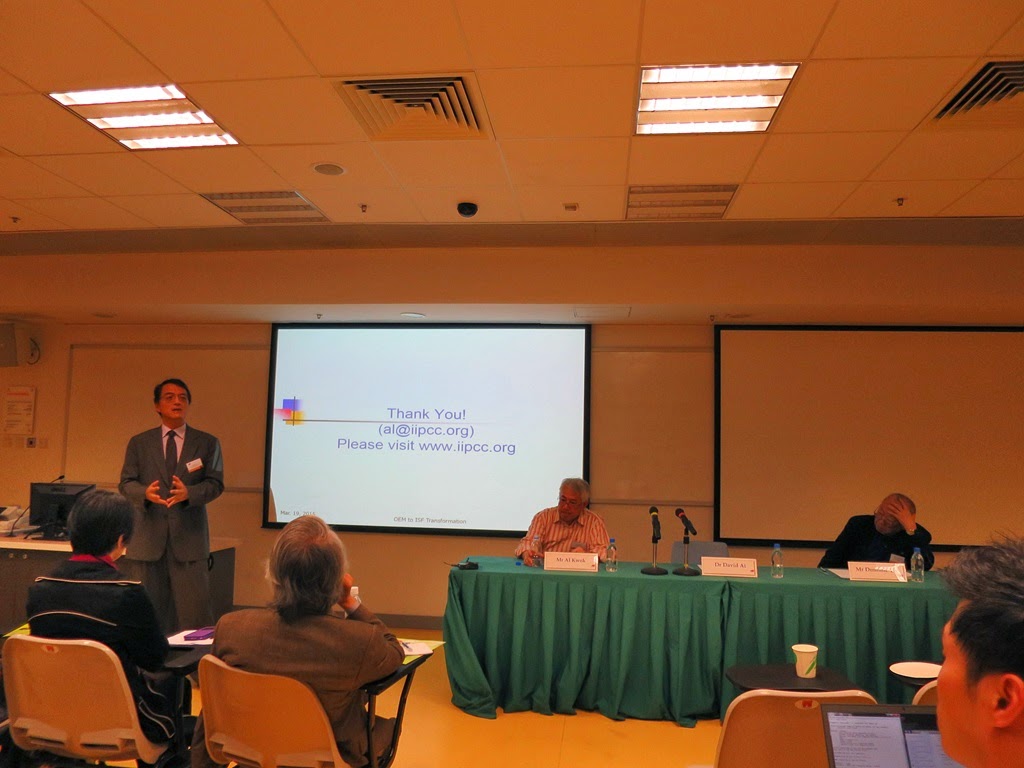 During Q&A Session, Mr. Dominic Yin shared why he was one of founders in IIPCC-HK because he observed many HK & China people were very smart but they didn’t know how to protect themselves (e.g. Product IP). He also shared his “Elder Care Project” with Tung Wah Group of Hospitals (東華三院) included 26 Nursing homes. He said we and China should have milestones (could upto 100 years). Three important things should be considered:
i) Smart City should be human-centric (以人為本，發揚中華文化。)
ii) "One Belt and One Road" (一帶一路)
iii) Heal the Desertification 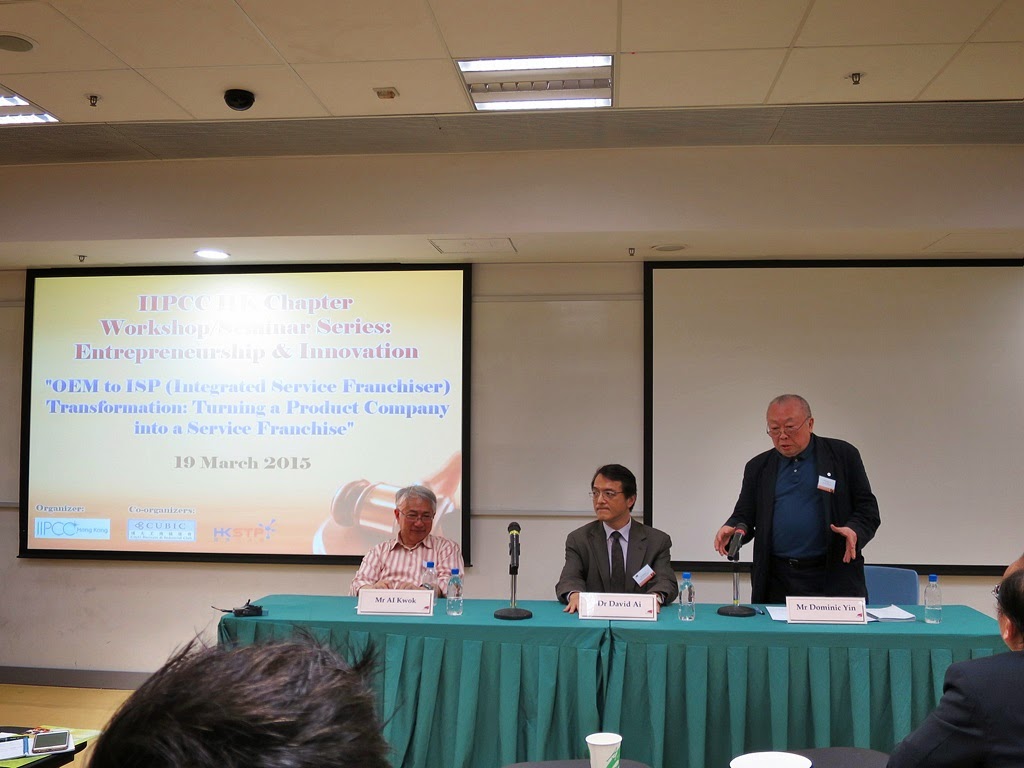 I asked two questions. The first question was “IP Business Model may not suitable in HK” such as Semiconductor IP trading was not success in Hong Kong. Mr. Al Kwok told me that China technology had not reach the high technology so that the demand side had not formed yet.

My second question was for Mr. Dominic Yin that Dr. Chih-Han Wang (王治翰) (ANQ Honorary Board Directors) said in the 2nd Chinese Quality Forum (華人品質論壇) that “The path toward Chinese Great Rejuvenation is through Quality way. (中華民族偉大復興之路就是品質之路)”. Mr. Dominic Yin replied that it was right half. He used Mr. Close Enough (差不多先生) as example and explained that it was no good for science but it was good for spirit such as Zhongyong (中庸). It explained why China had very good in art but not science in the past.