Today, I have joined a Nanotechnology Forum organized by Nano and Advanced Materials Institute Ltd (NAMI) with The Hong Kong Trade Development Council (TDC). I would like to share some information obtained in the forum.

In the beginning, Prof. Ng Ka Ming introduced the forum and speakers. 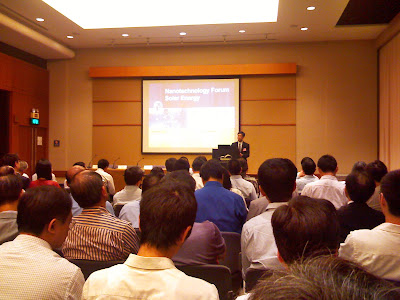 The first speaker was Dr. Peter CHANG (Technical Manager of DuPont China Ltd) and his topic was “Manufacturing and Technology of Silicon Thin Film Solar in DuPont”. 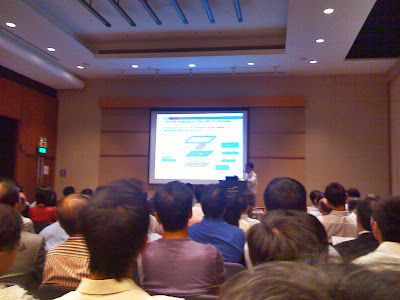 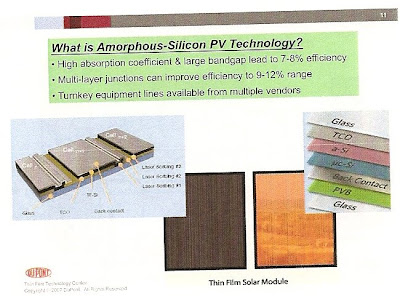 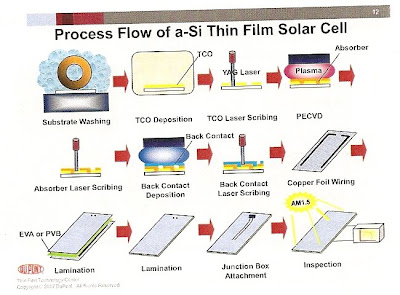 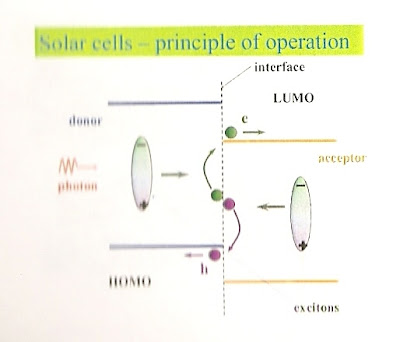 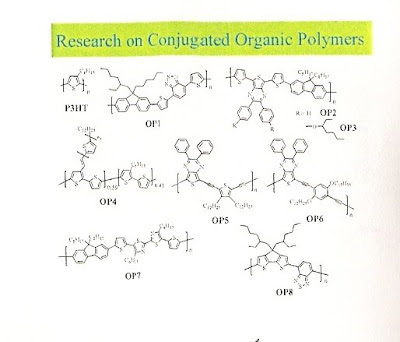 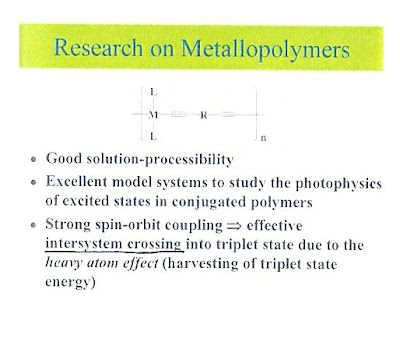 The third speaker was Prof. Z.K. TANG (Professor of The Hong Kong University of Science and Technology) and his topic was “基於光合作用原理的全天候生物光電轉換技術”
(I try to translate as “All-weather bio-photoelectronic transfer technology based on photosynthesis principle”.)


Some key points:
By using photosynthesis of Blue-Green Algae, self-sustainable all-weather solar cell could be developed. The fuels of this cell are water and carbon dioxide in air. 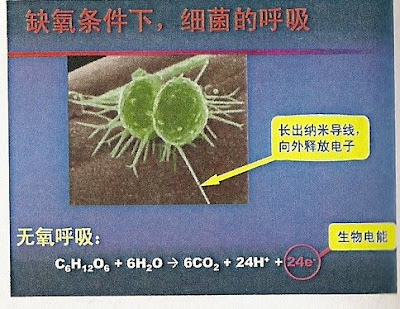 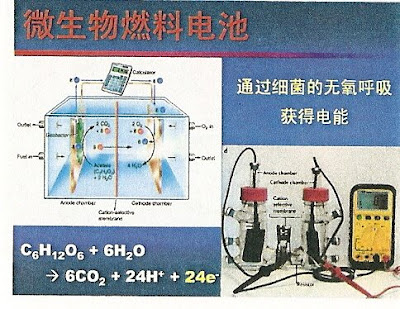 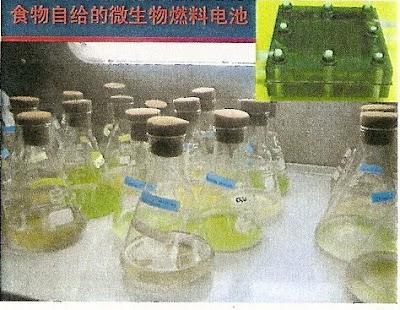 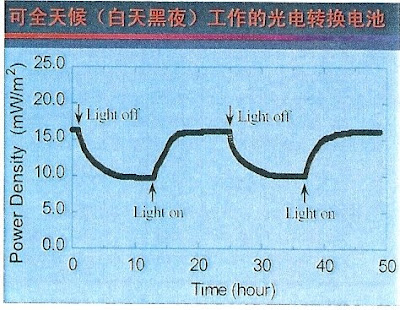 Some key points:
DuPont planned to build a new R&D facility in Hong Kong as well as a production facility in Shenzhen, China for current and future materials used for traditional crystalline silicon (c-Si) cell and module markets. The company would also expand into serving the fast-growing amorphous silicon (a-Si) thin-film market. 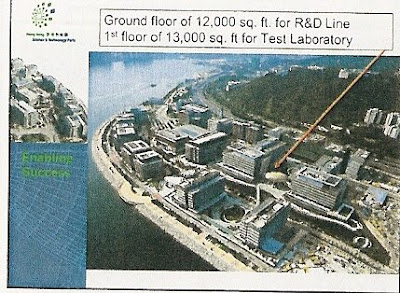 After that Prof. Xudong XIAO (Professor of The Chinese University of Hong Kong) introduced his topic “銅銦鎵硒薄膜太陽能電池: 現狀與前景”. 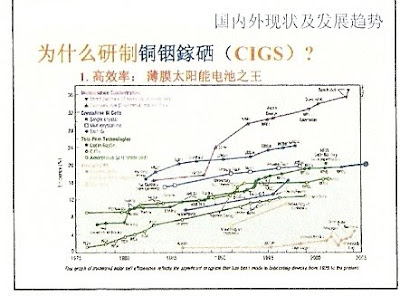 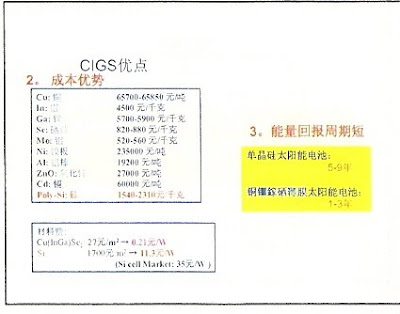 Zhai Zhigang (翟志剛), has become the first Chinese astronaut to have a walk in space on 27th September 2008. It is national pride! It reflects the technology and quality in Chinese aerospace industry are at a confident level. In the past, many quality control methodologies were developed in aerospace industry, and the application was extended to civil purpose. Examples of Failure Modes and Effects Analysis (FMEA) in Automotive Industry and Hazard Analysis and Critical Control Point (HACCP) in Food Industry were developed in the 1960s (USA).
I hope that the new quality control methodologies adopted in the Chinese aerospace industry will be applied to other industries shortly.


The following photos are valuable memory. 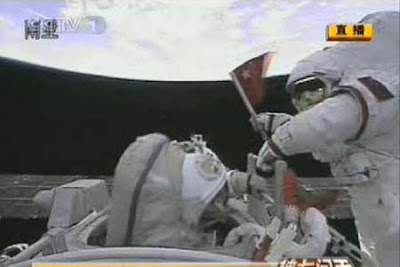 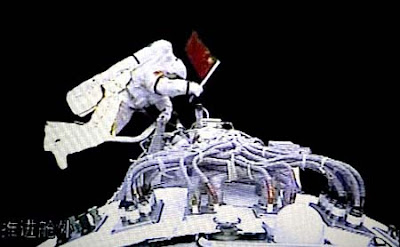 Quality Crisis happened in China again. The Shijiazhuang-based (石家莊) dairy producer Sanlu announced that the company would recall 700 tons of baby milk powder (嬰兒奶粉) that was produced before August 6, 08.

Melamine is an organic base with the chemical formula C3H6N6, which IUPAC name is 1,3,5-triazine-2,4,6-triamine. Ingestion of melamine may lead to reproductive damage, or bladder or kidney stones, which can lead to bladder cancer. 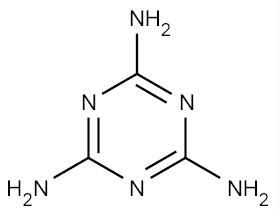 As a leading company, I believe Sanlu has quality control team for the production process control and incoming inspection. In the case, the problem came from the source which was dosed with melamine by raw milk suppliers. It aimed to cheat the quality control test for milk protein content. It broke the trust between manufacturer and supplier! In my point of view, quality is not only concerned as a tool for achieving the requirement of product, but also a culture to change the human behavior. If every one disciplines in quality way, the world will truly be “Out of Crisis” (Deming’s Book). Therefore, quality education is very important in China. Recently, I have found a degree course entitled “Bachelor of Engineering (Honours) in Total Quality Engineering (BETQE)” offered by City University of Hong Kong. I wish it will success and more quality professionals will be developed.

The seminar was co-organized by HKQAA, HKSTP and HKSQ on 11th September 2008. There was the second seminar for ISO 9001:2008 version held in HKSTP. We were delighted to have Dr. Nigel Croft as speaker for this topic. He is a Chair of IAF Task Force and Coordinator of the ISO/TC 176 management team for ISO 9001:2008 implementation, member of the Chairman’s Strategic Advisory Group of ISO/TS176, and Associate Technical Director of HKQAA.
The event was very successful with more than 100 participants and I would like to summarize some key points for sharing purpose. 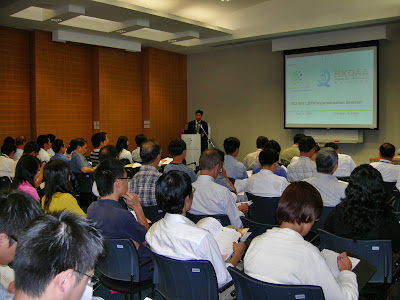 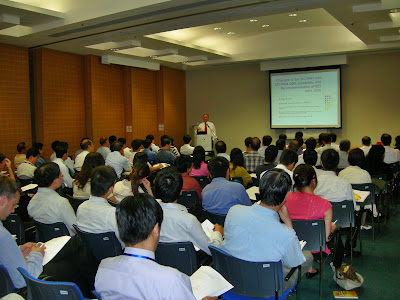 Based on user survey in 2003, approximately 80% of respondents were satisfied with the ISO 9001:2000 standard. However, the most commented clauses/areas of confusion are shown as follows:
· 4.1 General requirements
· 4.2 Documentation
· 6.2 Human resources
· 7.3 Design and development
· 7.5 Production and Service Provision
· 8.2 Monitoring and Measurement
· 8.5 Improvement 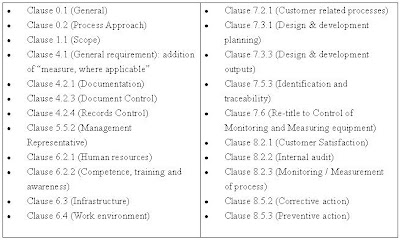 What should you do now?
1. Review the changes and check how they apply in your company
2. If you understand the changes, you might need to make small change to your QMS.
3. Upgrade in next surveillance visit

At last, Nigel concluded the following points:
· ISO 9001:2008 is scheduled for publication in Nov 2008 that
No major changes and no major impact
2 year “transition” period
· Major revision to ISO9004 scheduled for 2009
Sustained success of an organization. One interested interpretation of PDCA (Plan, Do, Check, Act) is Please Don't Change Anything.

Finally, I represented HKSTP to give a suvenir to Nigel. 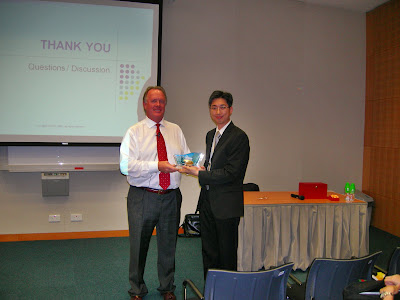 Karson (Ex-Chairman of HKSQ) presents a souvenir to Nigel. 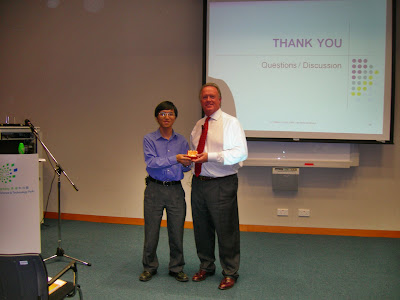 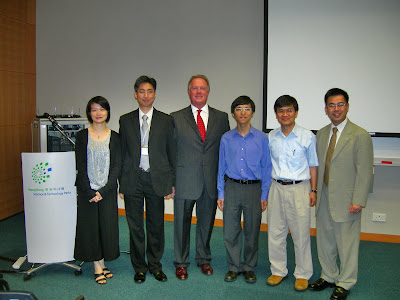 Today, my wife and I watched a drama entitled “Field of Dreams”. It referred to a true story of a football team, as an evocation of the human spirit, a testament to Hong Kong people. The footballers were ordinary people who collectively did an extraordinary thing, representing China at the Olympics in 1936. In this period, China was under invasion and civil war. The 1936 Games were the first to which China sent a delegation, a sole athlete (i.e. Liu, Cheng-Chun) having appeared at the 1932 Games.

I would like to recommend the drama from Hong Kong Repertory Theater (香港話劇團) to you. 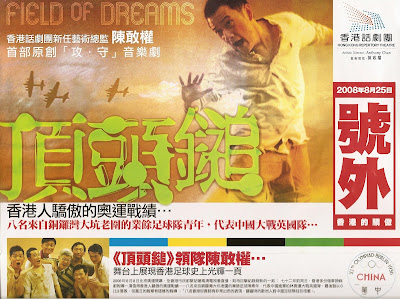 History information for your reference. 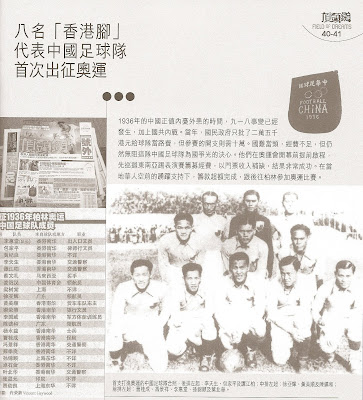 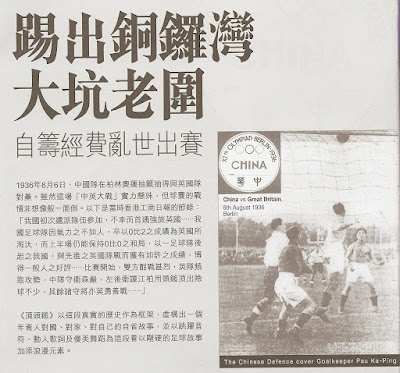 Tonight, my wife and I joined “譚偉豪與500人助選團隊聚會”, in which we have met many experts and friends in the IT field. We also met Dr. Winnie Tang, who is the Chairman of Internet Professional Association (http://www.iproa.org/). She is also the CEO of ESRI China (HK) Ltd. which is a famous software / solution provider in Geographic Information Systems (GIS). I knew ESRI when I studied the GIS course in MSc. Environment Engineering of Hong Kong Polytechnic University (PolyU) in 1999. (For more information, please visit: http://www.esrichina-hk.com/)

In my point of view, IT is one of the core competences of quality professionals to enhance quality management. For instance, we need a team of people to drive a Document Control Centre (DCC) to fulfill ISO 9001 requirements in the past. But now, it can be replaced by Electronic Document System (EDS) and high efficiency is resulted. The statement of “IT應該做主角” from Samson may be demonstrated.

I hope that Samson will win the election and represent IT industry to help the future development on Technology (including IT, Science, Biotechnology, etc.) in Hong Kong.


Photo taken with Samson and his wife. 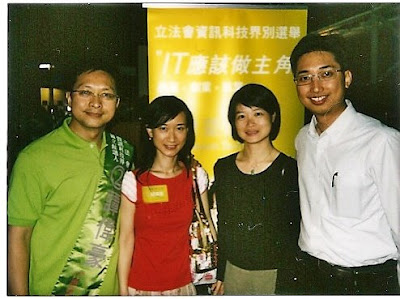