The seminar entitled “Design of an Accident Prevention System for Light Water Reactors Using the Artificial Neural Network and a Highspeed Simulator” was organized by Department of Mechanical Engineering, CityU on 27th Feb 2019.  Seven years after Fukushima, the last missing pieces of the jigsaw puzzle of light water reactor (LWR) safety have been put together. In the United States, the nuclear power industry has implemented a diverse and flexible strategy, FLEX (NEI 2012), for severe accidents.  The system makes rapid predictions using a high-speed simulation code and artificial intelligence (AI) diagnostics was proposed by Dr. Li-Chi Cliff Po.  I would like to summarize today speech for sharing below. 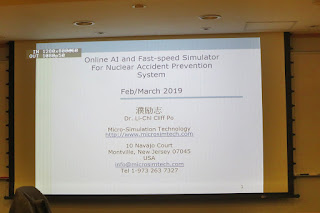 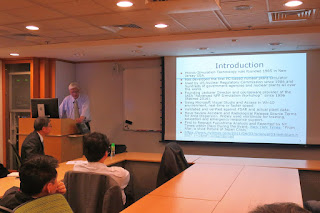 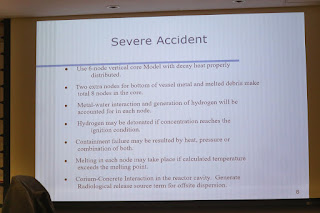 After that he demonstrated the PC TRAN CRP1000 DBA and Severe Accident Simulator as follows. 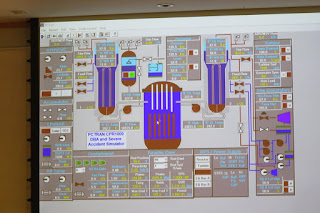 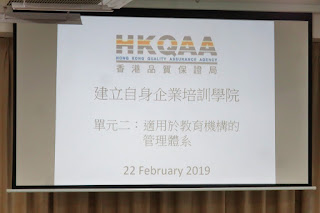 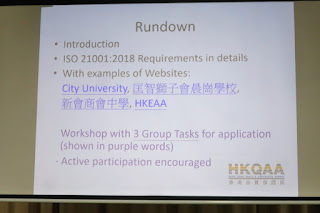 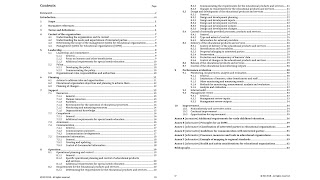 In the beginning, he showed the Educational Organization Management System (EOMS) framework of ISO 21001 in the PDCA cycle. Then Mr. Siu mentioned principles for an EOMS as follows:
a)      Focus on learners  and other beneficiaries;
b)      Visionary leadership;
c)      Engagement of people;
d)     Process approach;
e)      Improvement
f)       Evidence-based decisions;
g)      Relationship management;
h)      Social responsibility;
i)        Accessibility and equity;
j)        Ethical conduct in education;
k)      Data security and protection. 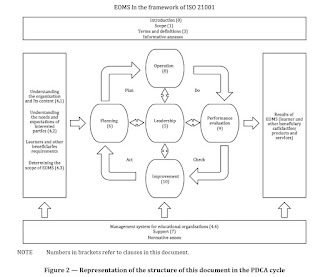 Then Mr. Don Siu briefed the Educational Organization context.  He also stated needs and expectation of interested parties.  Unlike ISO 9001, interested parties described more details in ISO 21001:2018 Annex C in which included Learners, Other beneficiaries, Staff and Other. 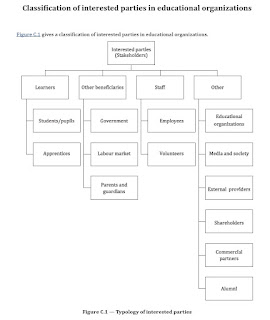 Dinner with Kenneth and Alice family (SQI) in Hong Kong

Minda and I were happy to have dinner with Kenneth (The former chairman of Singapore Quality Institute (SQI) & Asian Network for Quality (ANQ)) and Alice family on 22nd Feb 2019. In this time, we met Kenneth’s son, daughter-in-law and grandson. 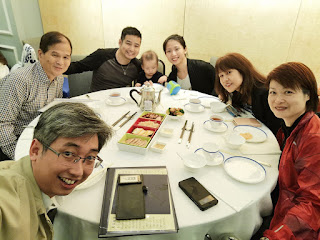 
Time is flying! I remembered Kenneth and I visited Nissan Motor in 2009 during ANQ in Tokyo.  He told me his son’s dream car is a racing car (as diagram below).  But now his son used family car.  It is lucky that he hadn’t brought it before! Ha…Ha… 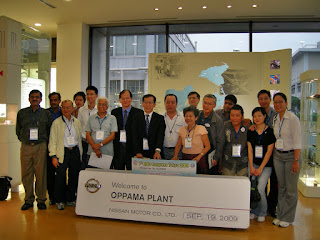 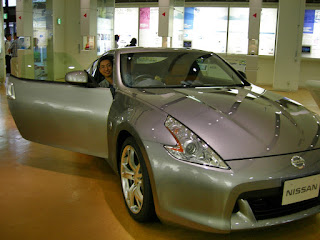 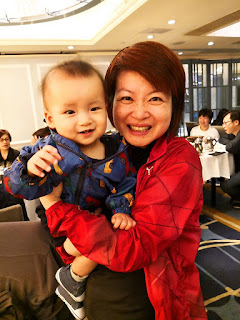 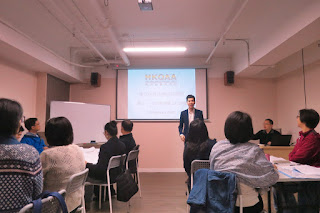 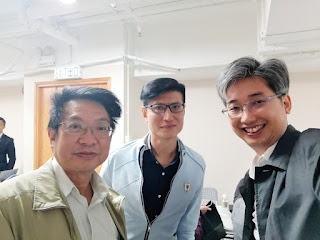 Mr. Don Siu (Auditor, HKQAA) was todays’ workshop speaker and his topics included four topics and they were ISO 10015:1999, ISO 9001:2015, Corporate University and Learning & Development and its functions. 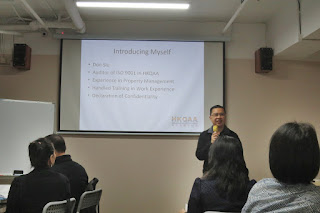 Firstly, he introduced ISO 10015:1999 “Quality Management – Guidelines for Training”.  The figure showed how to improve quality by training from “Needs for Improvement” to “Analysis of Organization Needs” to “Competence Related Needs” to “Training Needs” and then to perform “Training”. 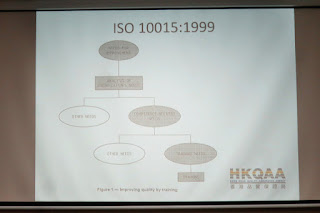 A four-stage training process were demonstrated and the workshop exercises were based on the following:
1.      Define training needs
2.      Design and plan training
3.      Provide for training
4.      Evaluate training outcomes
Monitoring is performed in each process. 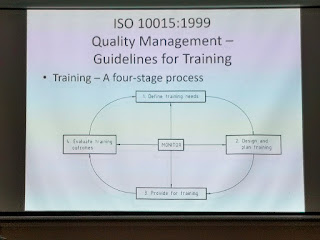 I attended the HKQAA workshop about corporate university and training on 15th Feb 2019.  Accidentally, I passed the TusPark Hong Kong near the venue in early morning.  I had visited TusPark – Tsinghua University Science Park in Beijing on 6th Nov 2015 after the 3rd Chinese Quality Forum (CQF).  I took a photo in the main entry. 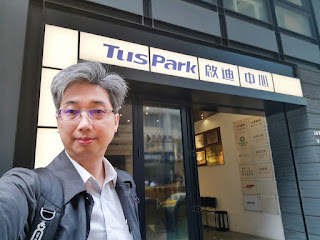 Tuspark, standing for Tsinghua University Science Park, is an international business incubator where multicultural tech startup founders were grown together.  Tuspark Hong Kong, based in HK, has a mission to facilitate the growth of the startup eco-system and to cultivate technology entrepreneurial cultures in Hong Kong. 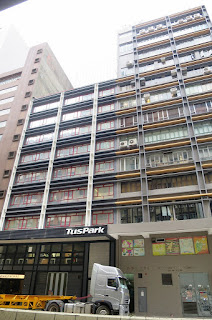 I also took a photo in front of the TusPark Logo. 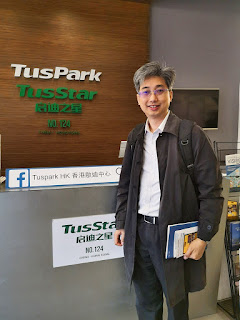 After the morning workshop, I visited TusPark again with my classmate Mr. Terence KS Wong (Course Development Director, Hong Kong Association of Staff and Workers Education and Vocational Training).  We both are HKQF ITAC committee member. 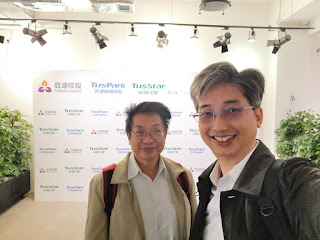 We would make an appointment to discuss it with HKQAA members in next time.

Dr. Zhang Qingpeng (SEEM Dept. CityU) and I (SEEM Dept. CityU) were honor to be invited by Mr. Peter Suen (Pharmacist & Owner, ACP ActiveCareGroup (明心医疗集团)) to join the meeting for Pharmaceutical Industry between US and HK (& Macau) on 2nd Feb 2019.  Mr. Peter Suen invited different experts in healthcare, pharmaceutical and other related disciplines to share together with Dr. Calvin H. Knowlton (CEO, Chairman & Founder, Tabularasa Healthcare).   We had took a group photo for memory. 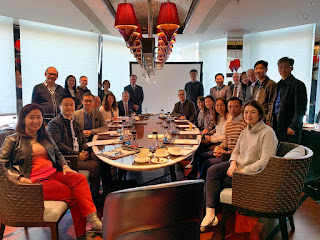 Mr. Peter Suen gave welcome speech and led us to introduce each other. 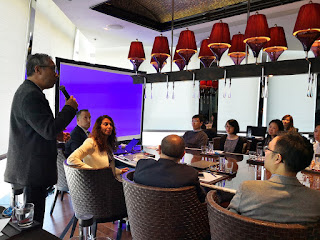 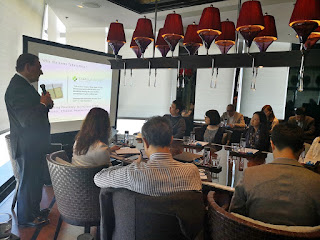 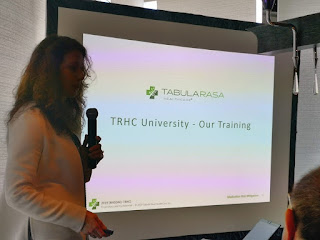 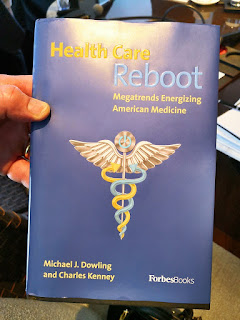