The seminar entitled “IP Seminar: Win the Patent Game with Darrell Mann!” which was organized by HKSTP on 20th March 2015. The speaker was Mr. Darrell Mann (CTO, Smartway Management Technologies Ltd. & CEO, Systematic Innovation Ltd (UK)). He is former Chief Engineer in Rolls-Royce and Visiting Professor at the University of Warwick in the UK. Before the seminar, we took a photo with IP & Innovation experts for memory.
(Left: Mr. Simon Tong (CEO, Smartway Management Technologies Ltd.), Dr. TW Liu (IP Expert), Mr. Darrell Mann and I) 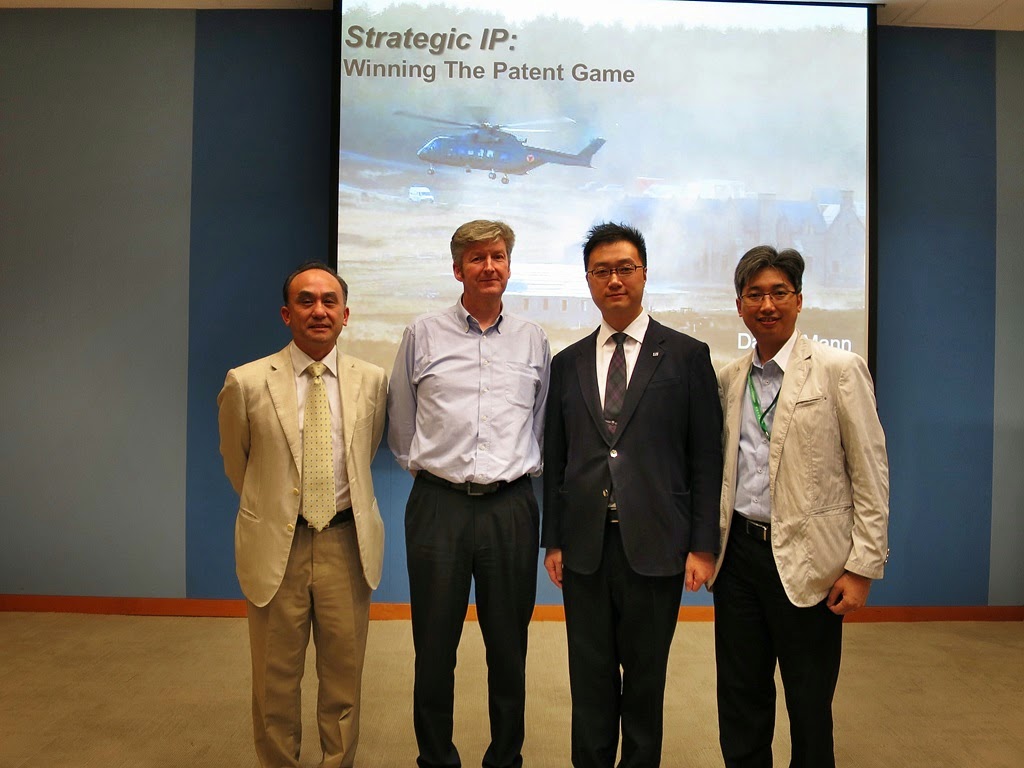 In the beginning, Mr. Darrell Mann briefed some background and told a short story that some patents in Helicopters were from Rolls Royce. However, Rolls Royce had not created money back because of patent expired. Time should be one of key factors to be considered. Then he mentioned “Systematic Innovation means Innovation Efficiency.” Distillation of best practices from all fields of human endeavor (e.g. Business, Science, Creative Minds and Patents” make “Breakthrough’ Database that was done by speaker for 17 years. 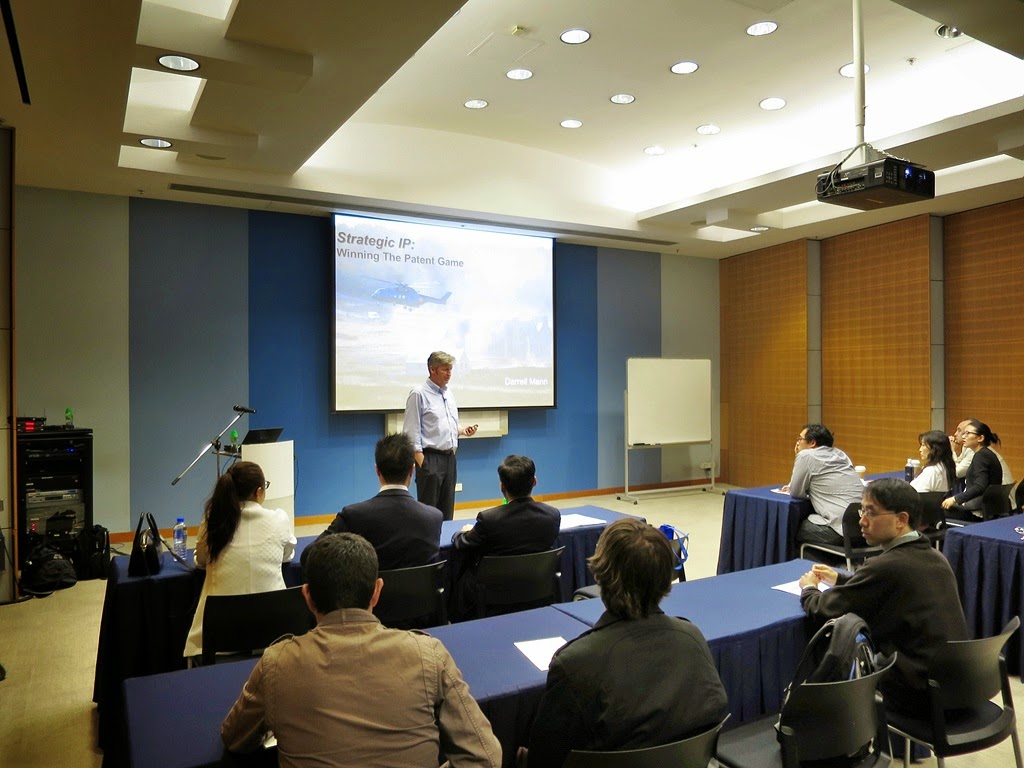 Then Mr. Darrell Mann showed the global rate of patent filings and it observed the exponential rise in different country different time (e.g. Russia, US & Japan after War II). China had started to play IP game since 1983. In 2011, China had 526412 patent applications. 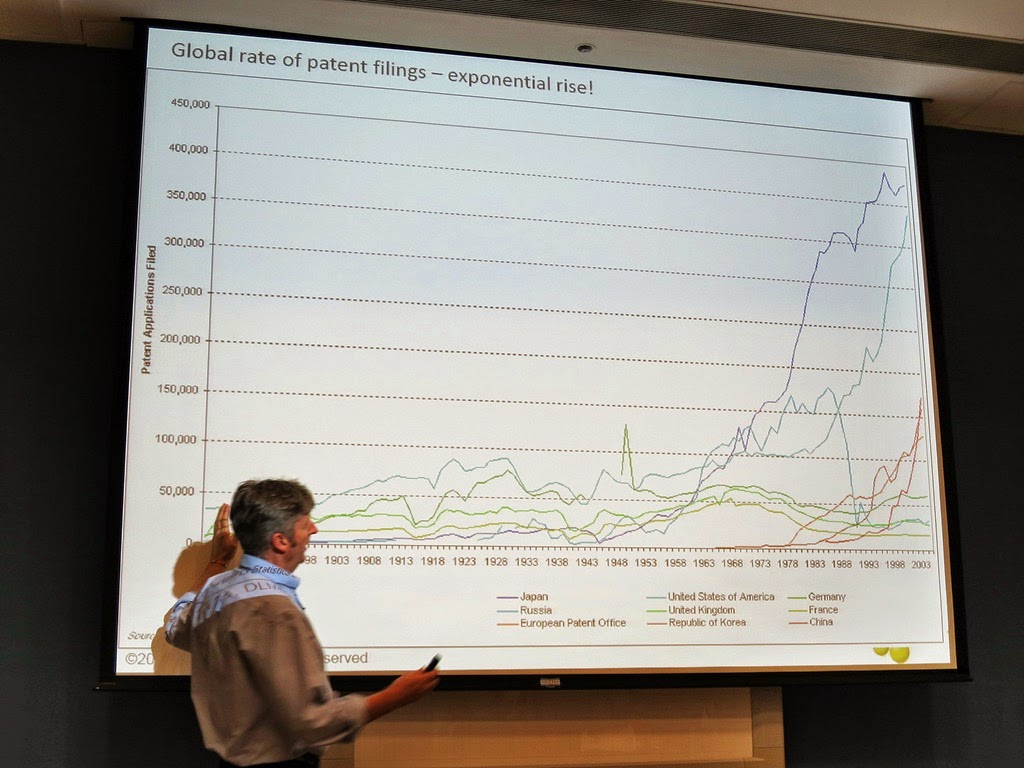 Mr. Mann introduced US Patents pattern that most of them are Technical Solution (part of them were about methods), IT & Business Solution were growing sectors. Moreover, 97% of patents would never pay back the cost of filing the patent. He said Invention was patent but Innovation would create value and pay back with money. 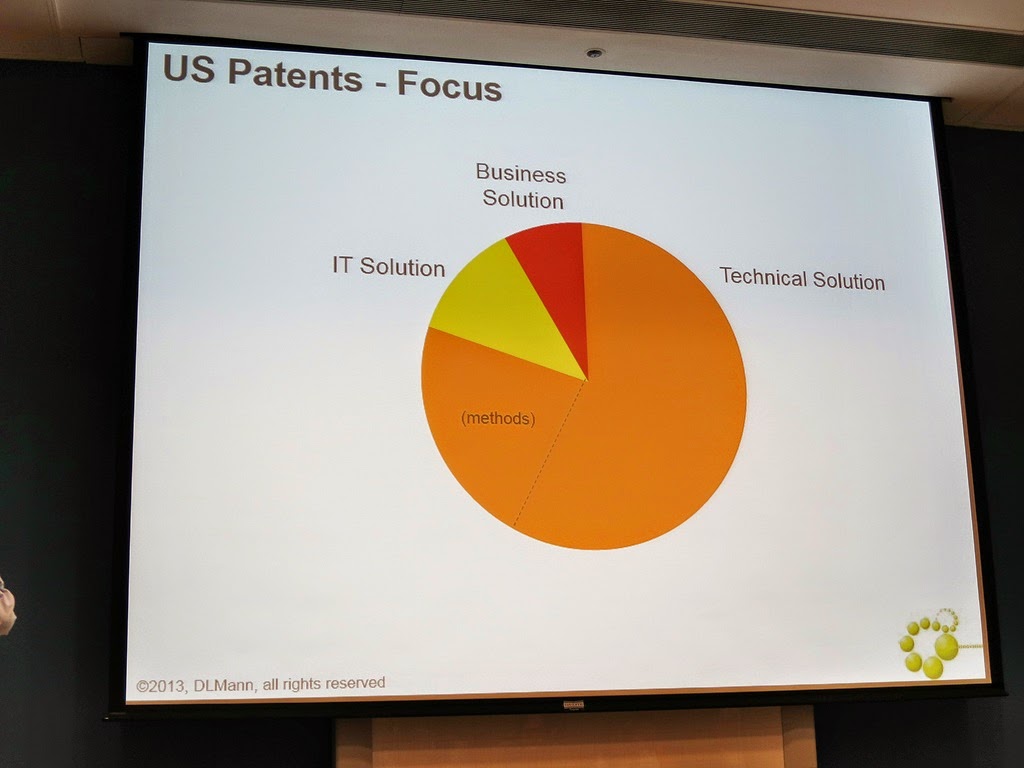 The following Strategic Questions were shared by Darrell Mann.
i) Which markets should we enter?
ii) Where should we build new plants?
iii) Should we centralize or de-centralise?
iv) Which R&D Programmes should we fund?
v) Which ones should have IP filed?
vi) How best to balance long and short term needs?
vii) Should we patent at all?
Moreover, Darrell Mann added Patent used to protect small inventor in the past but it was changed to protect big company now! 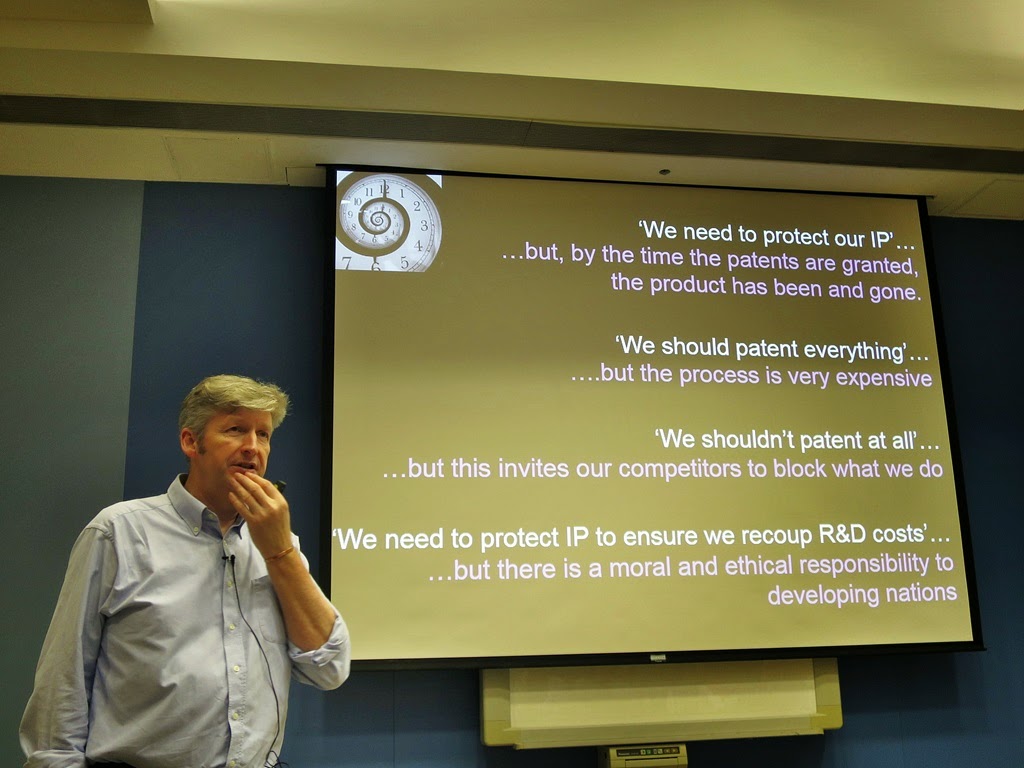 After that Darrell Mann explained the system evolution. He said evolution was not random but it followed certain patterns. The trend of Dynamization was mentioned which changed from Immobile to Single Joint to Multiple Joint to Completely Flexible to Liquid/Gas and then to Field. 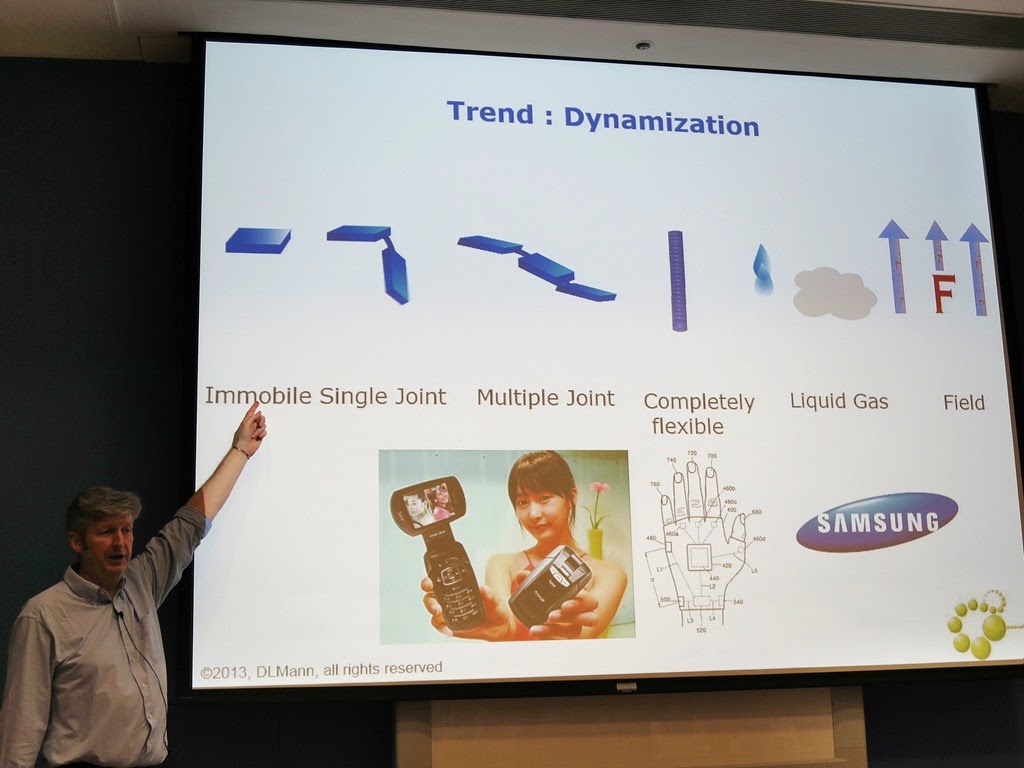 Lastly, Darrell Mann demonstrated his software for analysis IP / Patent through “Breakthrough’ Database. He used LED as topic to search how many related patent in the world (Result = 36849) and analyzed the Evolution Potential! 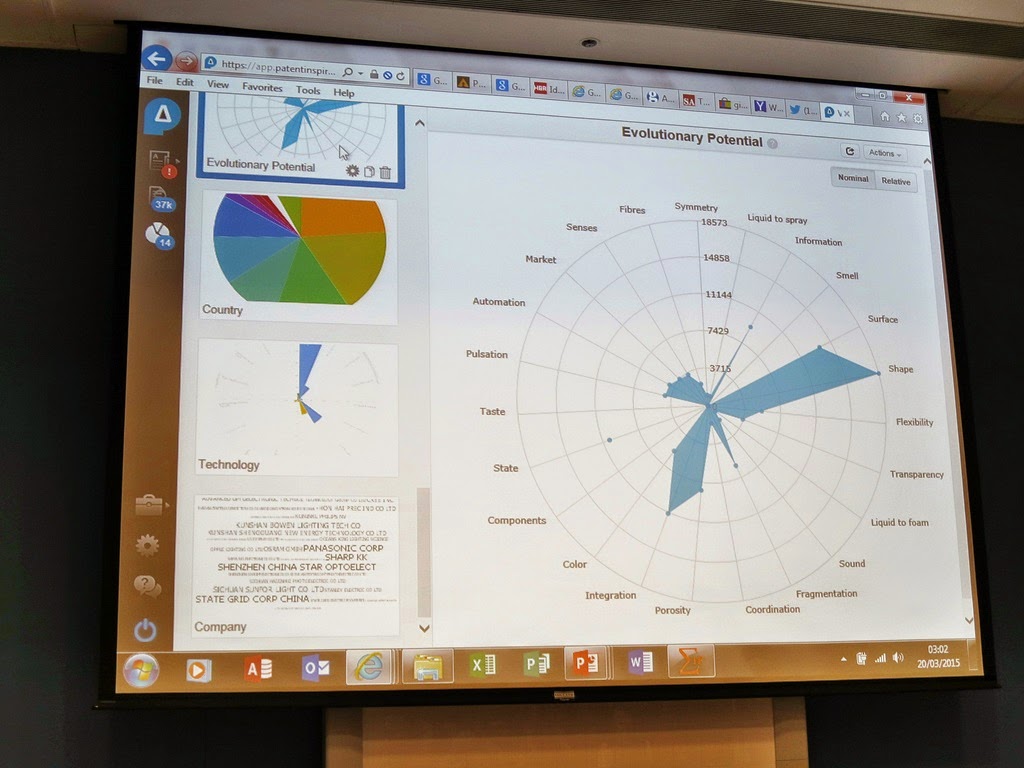 Before the end of seminar, Darrell Mann showed us the IP Strategic of Big Companies. He said we were able to predict the future but only ‘where we’ went but not predict ‘when’ it happened. 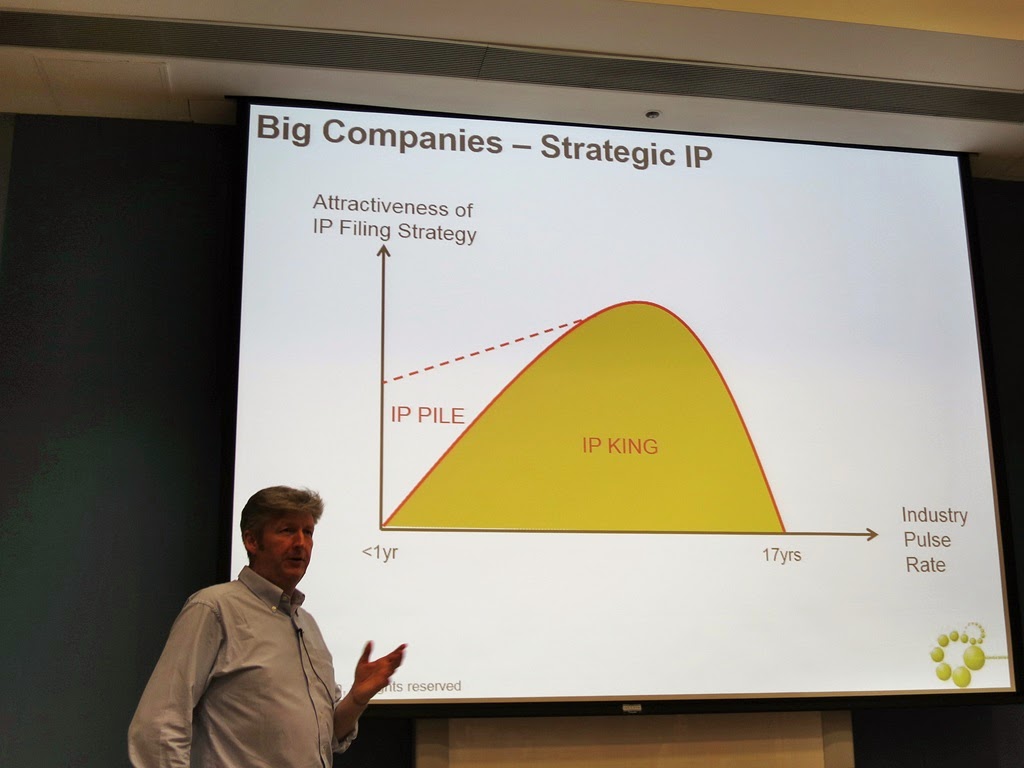 In addition, Darrell Mann showed us the comparison between traditional route and Agile Innovation route for IP Generation. 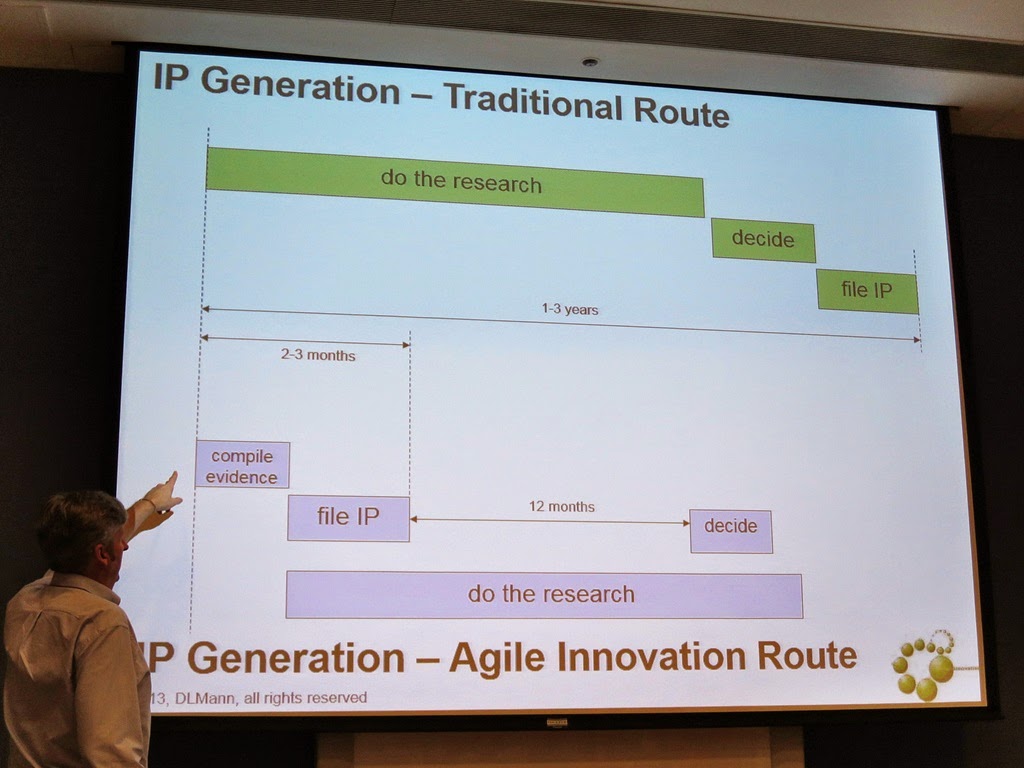 I presented a souvenir to Mr. Darrell Mann. It is a crystal of Golden Egg in Science Park. 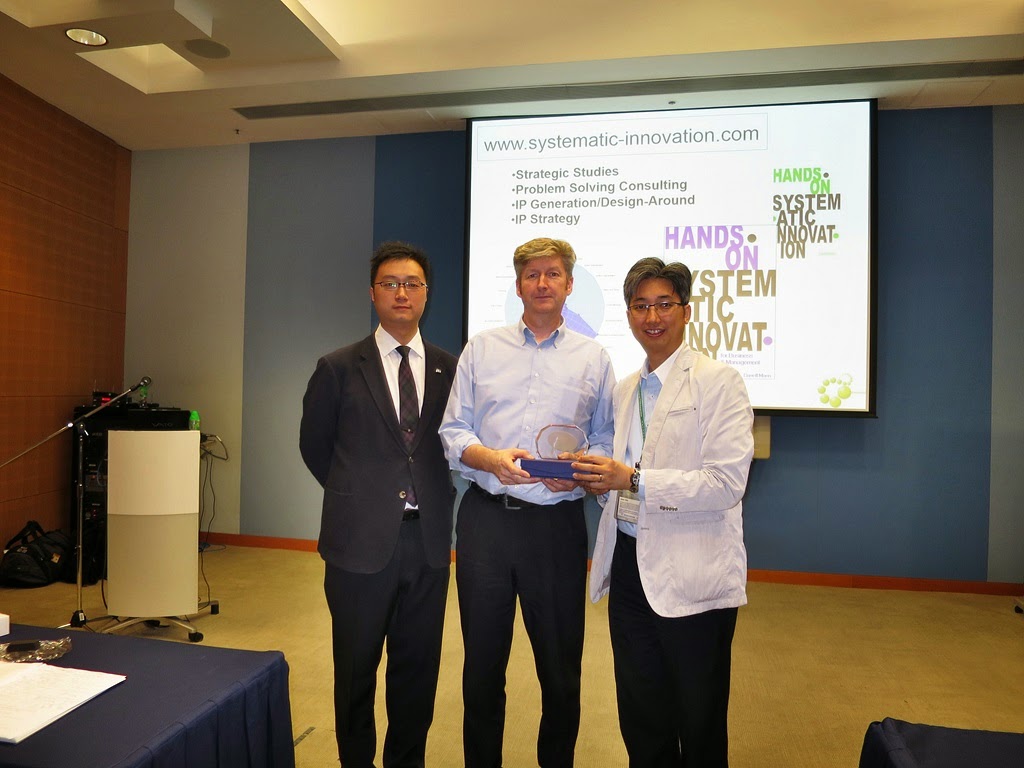