The 6 Leadership Styles to Win at Different Challenging Times

I attended the seminar entitled “The 6 Leadership Styles to Win at Different Challenging Times” on 17 August 2012, which was organized by the The Centre for Logistics Technologies and Supply Chain Optimisation, Chinese University of Hong Kong (CUHK) and the Hong Kong Science and Technology Parks Corp. (HKSTPC).

The trainer was Dr. Mark Lee and his talk content included “What Do Effective Leaders Do?”, “Consideration of Impacts on Working-Climate”, “The 6 Styles”, “Leaders Need Many Styles”, “More Science, Less Art” and “Group Discussion”. 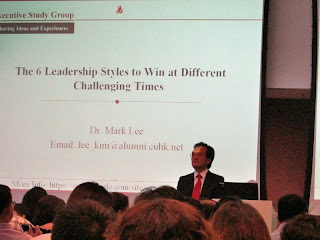 In the beginning, Dr. Lee said "Change is in CEO Top Agenda" and quoted Prof. John P. Kotter statement that "Management is about coping with complexity. Leadership, by contrast, is about coping with change.". Then he also quoted Daniel Goleman (Author of Emotion Intelligence) four fundamental components of emotional intelligence (EI) that "Self-awareness", "Self-management", "Social awareness" and "Social skill". After that he compared EI to Lao tzu (Chinese Philosopher) as follows.
If you understand yourself, you are illuminated. ("Self-awareness" and "Self-management")
If you understand others, you are smart. ("Social awareness" and "Social skill") 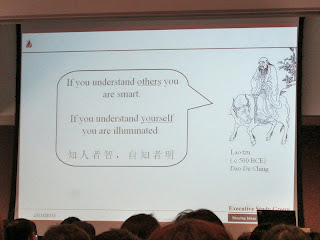 Then Dr. Lee introduced the six leadership styles: 1. Coercive Style (強制型), 2. Authoritative Style (引領型), 3. Affiliative Style (親和型), 4. Democratic Style (共識型), 5. Pacesetting Style (師父型), and 6. Coaching Style (導師型).
He quoted Daniel Goleman again that Leaders with the best results do not rely on only one leadership style; they use most of them in a given week - seamlessly and in different measure - depending on the business situation. 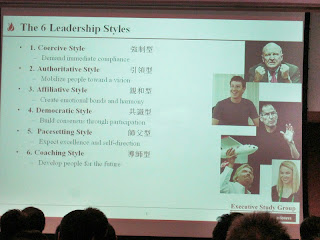 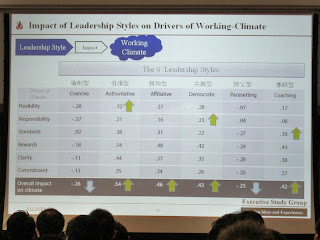 Coercive Style (強制型) was discussed. It damaged Working-Climate because of "Flexibility is the Hardest Hit", "Sense of Responsibility Evaporates" and "A Damaging Effect on the Rewards System". However, Jack Welch statement was quoted "Strong managers who make tough decisions to cut jobs provide the only true job security in today's world." (不要攬著一齊死) and Dr. Lee added it should be changed the style at appropriate time. (見好識收) 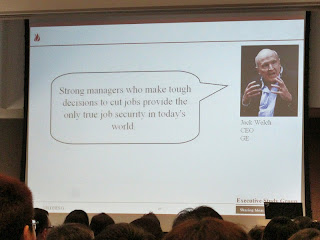 Authoritative Style (引領型) was most effective and driving up every aspect of Working-Climate (See diagram below). Authoritative leader state a vision, set standards, and let people know how their work is furthering the group's goal. However, it should beware of experienced team members. It may be fail when a leader was working with a team of experts or peers. 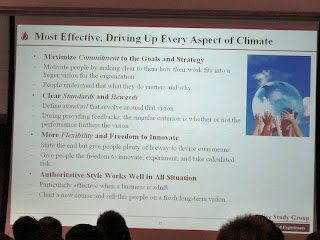 Affiliative Style (親和型) was people come first. Enhancing communication and relationship, some measures should be implemented. Dr. Lee quoted two examples. The first one was in university in London that all staffs stopped working at 5:00pm on Friday and gathering at lobby for drinking together and talking each other. The other example was a local Chinese restaurant which established a position named "Employee Relationship Manager" and they arranged birthday party every month.
However, Dr. Lee send it should not be used alone. Affiliative Style had better used together with Authoritative Style (引領型). 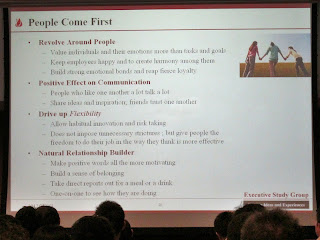 Democratic Style (共識型) could learn what to do to keep morale high. Dr. Lee quoted Mark Zuckerberg (Founder of Facebook) statement about empowerment. But the democratic style sometimes gave people feeling confused and leaderless. It works best when it needs ideas and guidance from able employees; and it generates fresh ideas for executing with vision. 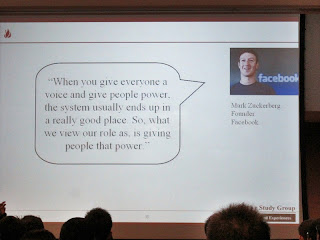 Pacesetting Style (師父型) demands for Excellence. They set extremely high performance standards and exemplifies them himself. It did easily destroy Working-Climate because of evaporation of flexibility and responsibility, as well as, unclear reward and commitment. It could be worked well if all employees were self-motivated and high competent. 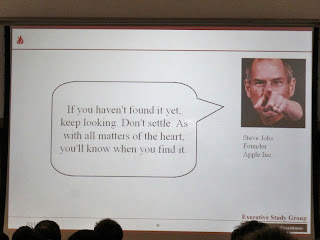 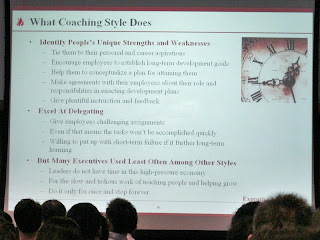 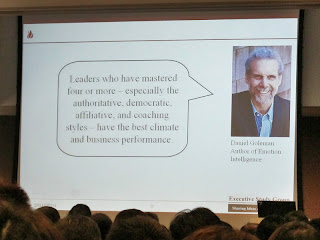 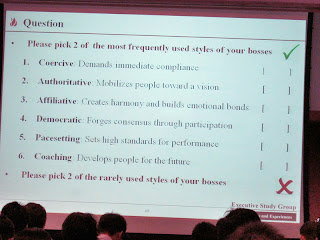