For the 2012 Legislative Council (Legco) Election to be held on 9 September 2012, HKIE - Information Technology Division organized Forum to facilitate HKIE - IT Division members to meet the candidates on 22 August 2012. I was attended the forum and recorded as follows.

In the beginning, both FC Election Candidates took a photo with Ir. Prof. CHOY Kin Kuen (President of HKIE). Prof. Choy was the chairman of that forum and briefed the rule that each candidate had 10 minutes to present and then questioned from audience. Each person allowed to question not more then one minute. 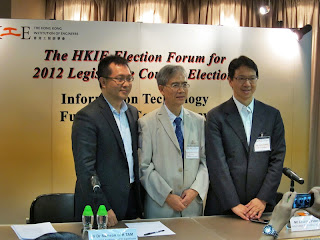 The first IT FC election candidate speaker was Dr. Samson Tam and he explained his work in the Legco in the past four years, as well as, his future proposal if elected. He identified his role as bridge between industry and government. 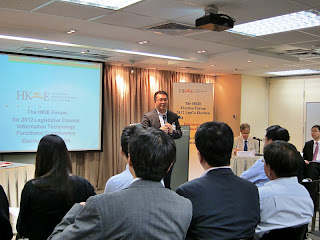 The second IT FC election candidate speaker was Mr. Charles Mok and he said Dr. Tam's work was under expectation and explained his proposal if elected. 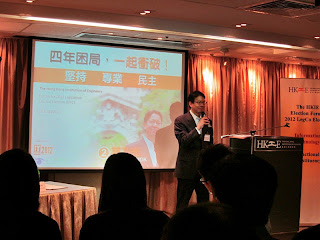 During the Q&A session, many professionals asked different questions and summarized as follows.
1. How to establish and practice the Technology and Communications Bureau?
2. How to build Data Centre hub in Hong Kong?
3. It needed to focus the information security and cloud computing.
4. How to strength IT SME business? CEPA?
5. How to improve the IT education included teachers and students standard?
6. It needed to attract more MNC in IT field establishing R&D centre in Hong Kong. 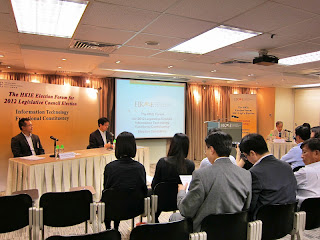 At the end, both candidates gave conclusive remarks.

It was a gentle forum for discussion IT future policy. No serious criticism / argument happened in this professional forum.