Briefing Forum on Report of HKCTC

The testing and certification industry was identified by the Task Force on Economic Challenges as one of six economic areas in Hong Kong. It is expected to have clear advantages and good potential for further development. Therefore, Hong Kong Council for Testing and Certification (HKCTC) was established in September 2009 and then the council submitted a report to government with recommendations to promote further development of the industry on 31 March 2010.

Briefing Forum on the report was held by HKCTC to brief the industry and stakeholder on the recommendations on 31 May 2010. Hong Kong Society for Quality (HKSQ) as one of professional organization related to the testing and certification industry and Hong Kong Science and Technology Parks (HKSTP) as one of stakeholder in the industry were invited to attend the forum. I would like to summarize the forum as follows. 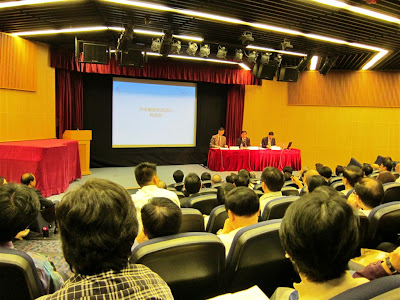 In the Report, the Council recommends the Government to adopt a dual approach in promoting the development of the industry. They were:
i) Making general improvements to the accreditation service
ii) Focused factors of production of industry and put efforts to specifics trades which covers Chinese medicine, construction materials, food and jewellery. Two emerging trades, namely environmental protection and information & communications technologies (ICT) would also be focused.

Professor Ching said that the seventh edition of the Closer Economic Partnership Arrangement (CEPA) were agreed to extend the professional service to China. The new arrangement allowed accredited companies in Hong Kong to test products according to the China Compulsory Certification (CCC) System. There were about 300 companies that could do product testing in Hong Kong and about half of them were accredited by Hong Kong Accreditation Service (HKAS) of the government. 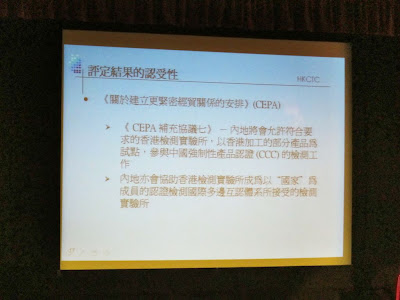 During Q&A session, many suggestions were discussed. Some opinions by participants were summarized as follows:
i) China national standard development should be participated by scientific organizations in Hong Kong (e.g. Universities, R&D centres, ASTRI, Science Park, etc.)
ii) Food CB accreditation scheme should be enhanced.
iii) HKCAS scope should be enriched.
iv) Electric car testing standard should be developed.
v) Chinese medicine testing centre should be developed to attract aboard customer (e.g. Japan).
vi) HKCTC could organize a Testing and Certification conference and invited different experts to share their experience in Hong Kong.
vii) Development of reference standard accreditation service by HKAS (Mr. W.W. Wong replied that HKAS had developing such service and expected the MRA would be signed within 2 year.).

One of participants shared the test cost of Fei Cui (翡翠) is around HK$300 per sample (for 13 to 15 item test) in Hong Kong, but it is only HK$20 in China (or even as low as HK$10 for large amount). We all agreed the credibility is the most significant in T&C industry.
Reference:
HKCTC: http://www.itc.gov.hk/en/hkctc/about.htm
Report of HKCTC: http://www.itc.gov.hk/en/hkctc/related_document.htm