The Hong Kong Council for Testing and Certification (HKCTC), the Standards and Calibration Laboratory of the Innovation and Technology Commission (SCL), Government Laboratory (GL), Hong Kong Accreditation Service (HKAS) and Product Standards Information Bureau (PSIB) jointly organized the World Metrology Day (WMD), the World Accreditation Day (WAD) and the World Standards Day (WSD) Forum on 6 June 2017.  Hong Kong Society for Quality (HKSQ) was one of supporting organizations.  This forum aimed to celebrate the WMD, WAD and WSD and introduce to participants various aspects and benefit of the quality infrastructure. 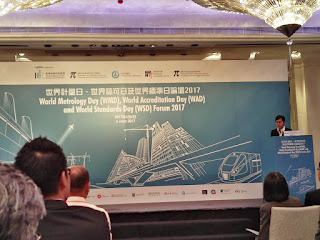 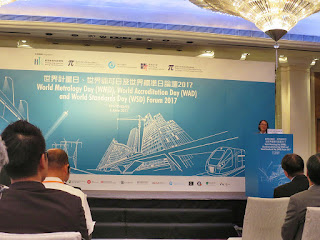 The first speaker was Dr. Toshiyuki Takatsji (Chairperson, Asia Pacific Metrology Programme (APMP)) and his topic entitled “Role of Metrology for Safe and Reliable Transport”.  Firstly, he introduced Agency of Industrial Science and Technology (AIST), which was a public research institute, and National Metrology Institute of Japan (NMIJ). 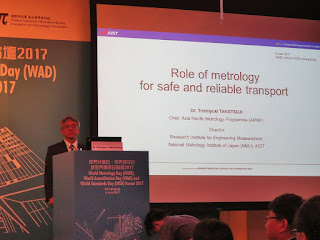 Dr. Takatsji briefed the unification of measuring units such as meter convention.  Because of non-international unit employed, many disunity accidents happened in the past such as Gimli Glider (1983), Mars Climate Orbiter (1999), etc.  Unification of the units facilitated the international trade Dr. Takatsji said. 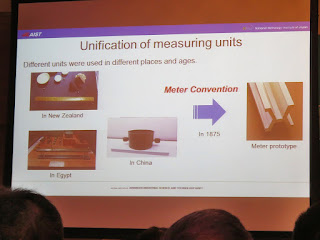 Then he introduced APMP which was a group of national metrology institutes (NMIs) from Asia-Pacific region engaged in improving regional metrological capability since 1977.  He also introduced their national quality infrastructure (NQI) included NMIJ, JISC and NITE under METI. 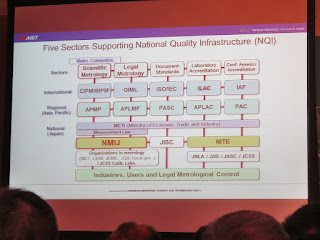 After that he quoted Lord Kelvin’s famous words that “To measure is to know” & “If you cannot measure it, you cannot improve it.”  Moreover, he stated NMIJ established ISO 16063-17 (Methods for the calibration of vibration and shock transducers -- Part 17: Primary calibration by centrifuge) with collaborative to automobile companies and published in 2016.  He also mentioned the emergency stop of Shinkansen Super Express in East Japan Earthquake.  Lastly, he concluded that safe and reliable transportation was underpinned by metrology which played indispensable role in establishing national quality infrastructure. 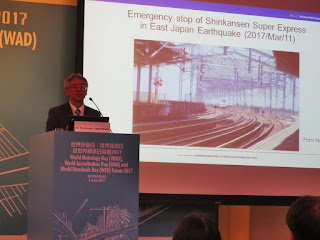 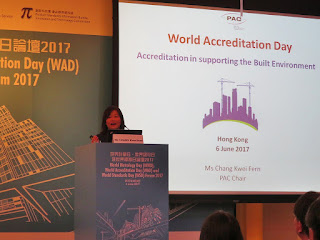 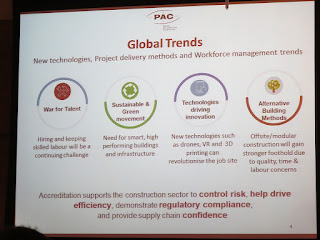 Then Ms. Chang briefed the values of accreditation included determining the technical competence, integrity and impartiality, transparent and credible conformity assessment result, etc.  For government and regulators, benefits were reduce public resources with assurance, enable innovation of good practice and build a more competitive economy, as well as, removal of technical barriers to trade.  For construction industry, benefits were confidence of products and raw material, thus reducing potential delays and product failure; Due diligence through independent evaluation and provided safe working environment. 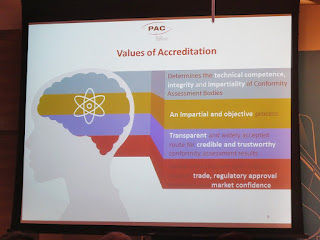 After that she mentioned about Pacific Accreditation Cooperation (PAC) which was association of accreditation bodies and other interested parties whose objective was to facilitate trade and commerce among economies in the Asia Pacific region.  She also stated the world accreditation structure that IAF/ILAC is international and then PAC/APLAC, EA, IAAC were regional.  Finally, Ms. Chang concluded her talk using the Quality Ecosystem linked with all stakeholders. 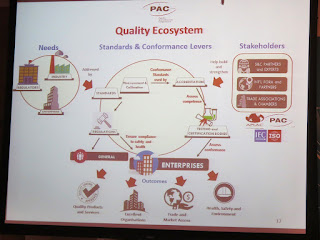 The third speaker was Mr. Adrian O’CONNELL (Chairperson, Pacific Area Standards Congress (PASC)) and his presentation title was “Standards Making Cities Smarter – Recent Initiatives”.  Firstly, he introduced PASC which was a forum of Pacific Rim countries to strengthen international standardization programs in the region and support free trade, economic efficiency and development in the region. 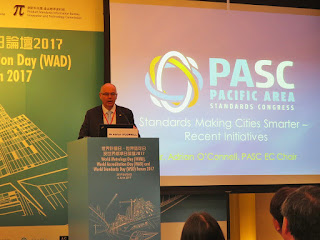 Then he mentioned one of definition on Smart Cities: “A smart sustainable city is an innovative city that uses information and communication technologies (ICTs) and other means to improve quality of life, efficiency of urban operation and services, and competitiveness, while ensuring that it meets the needs of present and future generations with respect to economic, social and environmental aspects”. 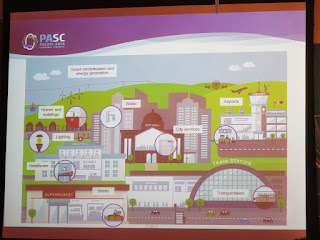 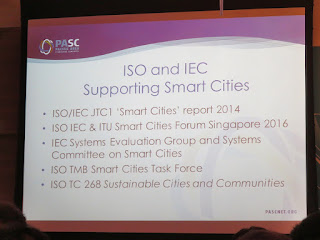 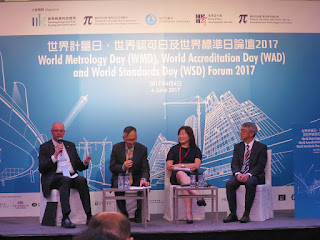 During the tea break, I met my friend Ms. Brenda Lam (Senior Engineer, SCL) and we took a photo for memory. 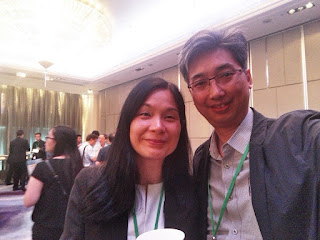 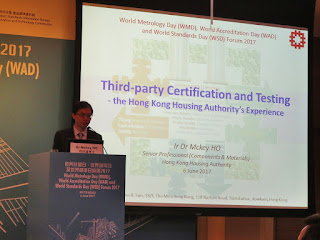 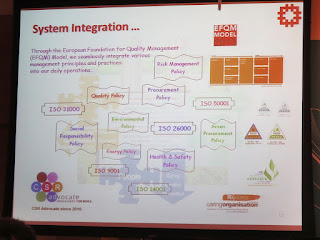 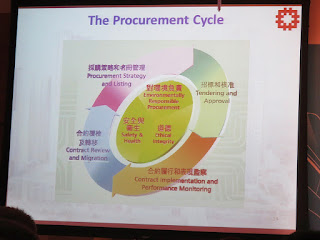 Dr. Ho showed the table that different contractors had different certification requirements.  For direct testing contractors (testing laboratories) on main construction material requested to be accredited under HOKLAS in HA Specification, as well as, ISO 14001 and OHSAS 18001 certified.  At the end, Dr. Ho told us about sustainable products through both Downstream and Upstream controls.  Downstream control was based on valid test certificates issued by HOKLAS accredited laboratories and surveillance test upon material delivery.  Upstream control was based on manufacturers certified to ISO 9001, ISO 14001 and OHSAS 18001, as well as, product certification (2010/2011 for 10 major building materials). 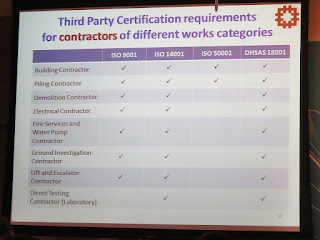 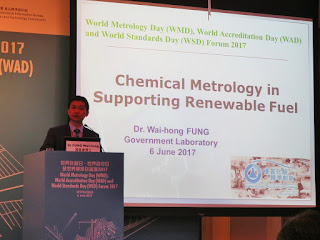 Since fossil energy was non-renewable which would increase global warming and not sustainable, biofuels was an important alternative energy sources for transport because it was renewable, less impact on current infrastructure.  The most common biofuels were bio-ethanol (E10, E15, E25, E85, E100) and biodiesel (B2, B5,B20, B100). 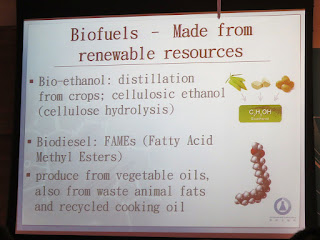 About Biofuels quality issues such as impurities which affected engine parts to induce corrosion and oxidation.  In USA, some specifications of biofuels governed by standards such as ASTM D4806, D5798, D6751 and D7467.  In Europe, they were EN 14214 and EN 15376. 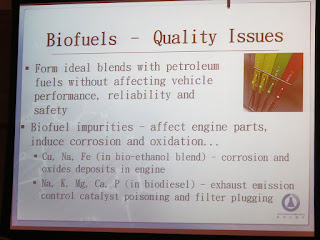 There were different testing methods for biofuel test under ASTM and EN specification and showed in the following table. 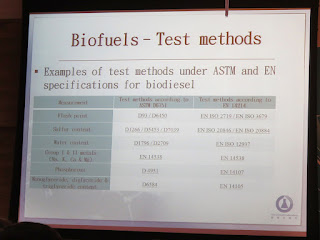 Finally, Dr. Fung briefed the chemical metrology on developing reference methods and traceable measurements for biofuel.  He also mentioned Consultative Committee for Amount of Substance (CCQM) of BIPM schemes for biofuel such as CCQM-P129 “Determination of Ethanol and Water in Bio-ethanol Fuel”, CCQM-K100 “Analysis of Copper in Bio-ethanol” and CCQM-K123/P157 “Trace Elements in Biodiesel”.  At the end, he stated some CRM for Biofuels below.
For NIST (USA), SRM 2772 B100 Biodiesel (Soy-based) and SRM 2773 B100 Biodiesel (Animal-based)
For IRMM (European Commission), ERM-EF001 Biodiesel (Rapeseed)
For NMIJ (Japan), CRM 8301-a Bioethanol and CRM 8302-a Biodiesel Fuel (Palm Oil-based)

Mr. YAN Yui-kuen (Head of Laboratory, SCL) was the last speaker and his topic named “Metrology Supports Modern Transport”.  In the beginning, Mr. Yan told us his dream on transportation like teleportation in Star Wars.  Then he pointed out some desired transport system elements. 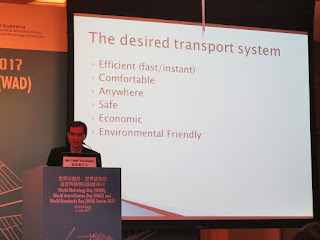 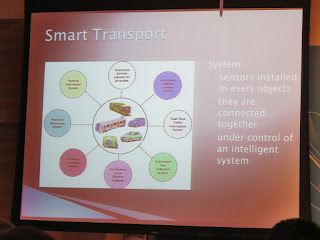 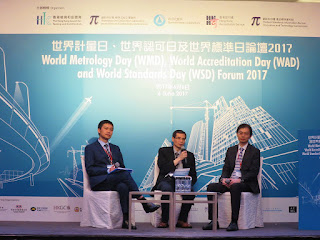