The Executive Study Group (ESG) seminar 2017 – Smart Leadership named “Getting Your Staff to Solve Problems “Without” You” was held by the ESG, Asia Pacific Institute for Strategy Limited (APIFS) and the Hong Kong Science and Technology Parks Corp (HKSTP) on 22 Jun 2017.  I would like to summarize the seminar for sharing below.  In the beginning, Dr. Mark Lee briefed the history of ESG establishment and discussed the Corporate Retreat for traditional sunset industries.  He expected that we could get some inspiration through their seminar series. 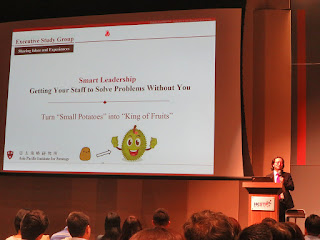 Before the seminar, he asked two questions to participants and they were “How many of you are small potatoes in your company?” and “How many of you enjoy being a small potato?” Then he briefed the contents included “Business Complicatedness”, “Smart Leadership – six items” and “Group Discussion”. 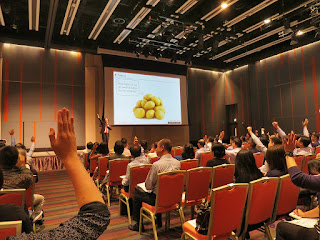 Firstly, Dr. Mark Lee mentioned that there were too many KPIs for executives in an increasingly complex world (~ 25 to 40 KPIs committed).  Complexity is not a bad thing that brings opportunities as well as challenges.  He then quoted the Hard Approach from Prof. Frederick Taylor (Father of Scientific Management) about performance measures and incentives but more and more procedures added.  He also quoted Soft Approach from Prof. Elton Mayo to introduce a variety of “soft” initiatives.  It couldn’t help but created “Small Potatoes” because of complicatedness.  Manager faced to spend 40% for writing reports and 60% for coordinating meetings. 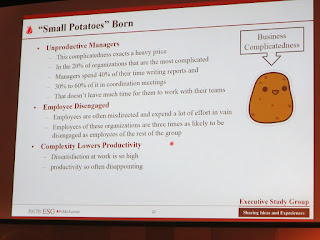 Dr. Mark Lee proposed to use People’s Autonomy (自主性) for Complexity (複雜性) and to create the Atmosphere for Autonomy & Cooperation (無為而治).  He defined Smart Leadership as below diagram.  The first three items are Enabling factors under Autonomy that provides the information needed to understand where the problems are and empowering the right people to make good choices.  The second three items are Impelling factors under Cooperation that motivates people to apply all their abilities and to cooperate; as well as, Thanks to feedback loops that expose them as directly as possible to the consequences of their actions. 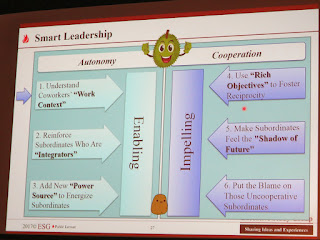 Autonomy:
1.      Understand Coworkers’ “Work Context”
There are separated into four elements that should be understood first and they were your coworkers’ (i) Goals, (ii) Challenges, (iii) Resources and (iv) Constraints. Dr. Mark Lee said work context was more than Job Titles and Job Descriptions that explained behaviors. 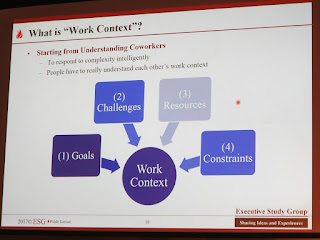 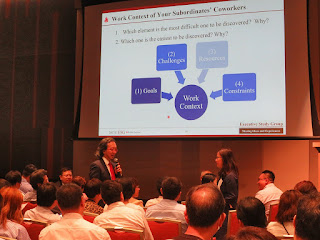 2.      Reinforce Subordinates Who Are “Integrators”
Then Dr. Mark Lee told us that potatoes would fight each other.  Therefore, we needed to identify “Integrators” and help them obtain from others the cooperation needed to deliver more value (e.g. stronger voice in the promotions). He suggested to empower Integrators and supervisor should pay more attentions to the feedback of them and recognize their importance and contributions in front of other colleagues. 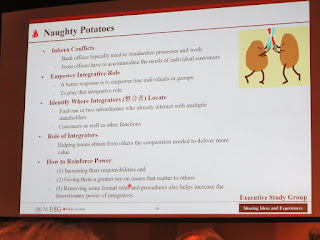 3.      Add New “Power Source” to Energize Subordinates
Dr. Lee said usually solving the problem was from frontline staff (least power). Therefore small potato would hide in their silos.  Dr. Lee suggested (i) to give power to increase cooperation, (ii) willing to take risks, (iii) without taking power away from others, (iv) to create new power bases by giving individuals new responsibilities for issues. 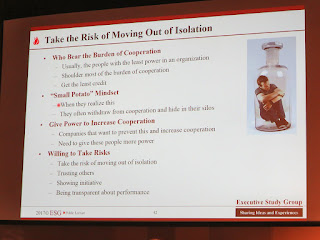 Cooperation:
4.      Use “Rich Objectives” to Foster Reciprocity
Dr. Lee proposed that we relied on others to succeed together because of business complexity that work became more inter-dependent.  He said enriched the objectives didn’t mean to add KPI but wider their scope of work.  We beware of too much clarification to reduce the feasibility.  Thus, Integrators decided to balance among many objectives. 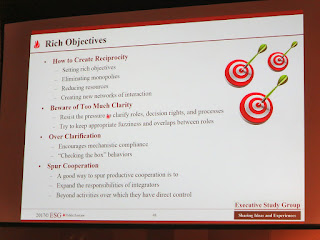 5.      Make Subordinates Feel the “Shadow of Future”
Then Dr. Lee quoted Prof. Robet Axelrod (University of Michigam) that “The shadow of the future does not reach them.” The longer it takes for the consequences of a decision to take effect, the more difficult it is to hold a decision maker accountable.  If we bring the future closer, people are more likely to feel the shadow of the future. Dr. Lee told us IBM case that led Marketing people to follow Sales work and let them understand Sales needs (work context).  So that Marketing people prepared new product information (ppt) was more directly and simply and suitable for Sales. 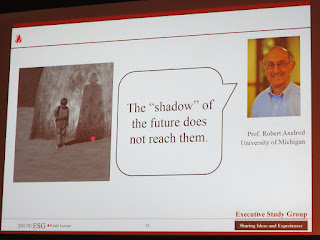 6.      Put the Blame on Those Uncooperative Subordinates
Dr. Lee suggested performing work context analysis to find out the cooperation problem.  He said that don’t totally blame the KPI owners and it should let frontline integrator to judge which units had contributed to solving problems. 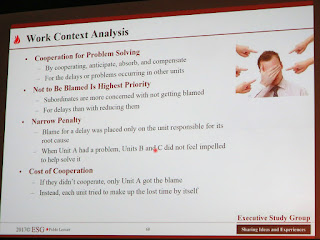 Lastly, Dr. Mark Lee concluded that smart leadership allowed companies to manage complexity that not by prescribing specific behaviors, but by creating a context within which optimal behavior occur.  The results would be increased employee satisfaction and creativity enabled. 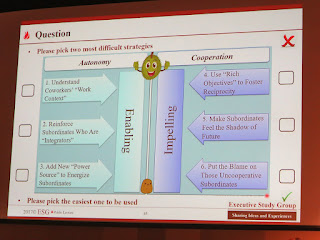 At the end, group discussion was performed based on two questions and they were “to pick two most difficult strategies” and “to pick the easiest one to be used”.