In the beginning, Dr. Catherine Chan (President, HKQFDA) gave a welcome speech. She said that QFD had been widely applied in various industries for doing product and service development all over the world and it was a Japan-originated methodology. Then she introduced Prof. Yoji Akao who is the founder of QFD. 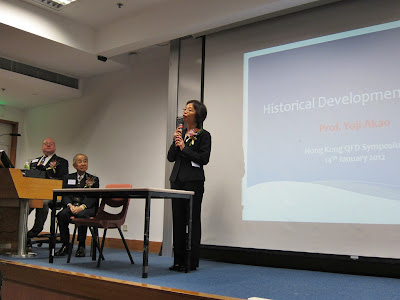 Prof. Sam Ho (Founder, HK5SA) was invited to be a Facilitator for the whole symposium. Moreover, he presented his magic for fun. 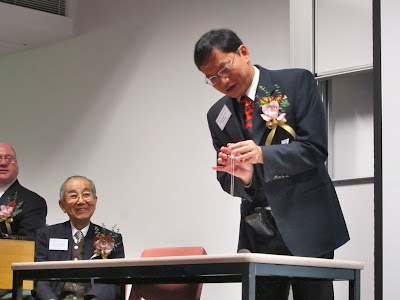 Mr. Glenn Mazur (Honorary President, HKQFDA) gave an opening speech and he said QFD was a strategy in organization. Moreover, he told us that he studied Japanese in 1969. Then he become Prof. Yoji Akao's interpreter and learnt QFD from him. 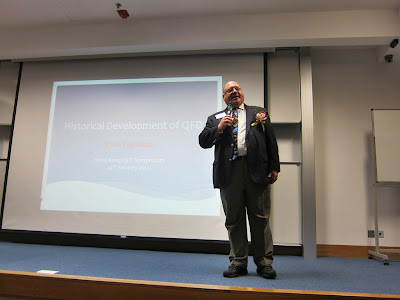 The first speaker was Prof. Yoji Akao (father of QFD) and his presentation entitled "Historical Development of QFD".

Prof. Akao said that QFD originated in the latter half of the 1960s in Japan. It aimed companies on doing product development. Recently, two major achievement were demonstrated as below.

2) Microsoft has launched Visio-QFD Tool and "MindManager DS"made the construction of deployment table by Excel. 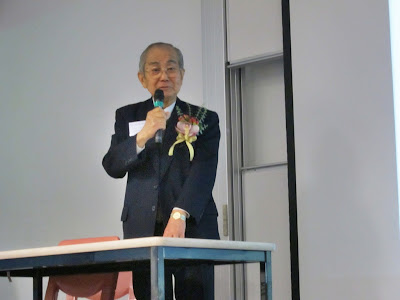 Then Prof. Akao shared his opinion on the accident of Fukushima Nuclear Power Plant. The nuclear reactor was built with many components and each component consists of a hug number of elements ranged from functional equipment, parts and processes. Those components were very important to the "quality of the system". Since QFD was able to visualize the enormous network and to locate the critical points of the network, all the demanded qualities (tacit knowledge), both the existing and hidden qualities, had to be extracted from the voice of the customer of each of the stakeholders. Therefore, he recommended to use QFD to view the "quality of the system" to secure the safety, including the location, for nuclear power plants. 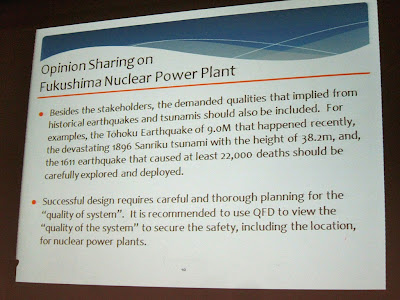 After that Prof. Akao introduced the birth of QFD.

In 1960, companies started to pay attention to design the product to achieve quality.

In 1966, Oshiumi of Bridgestone Tire proposed a chart as "true quality was converted into substitute characteristics and connected to process parameters of production".

Prof. Akao had the idea of "viewpoint of quality design" when conducting a consultancy project at Fuji Automobile; and then he started the development of Quality Deployment (QD).

The first application of QD was conducted by Ueda, Nakamure and Watanuki; then the case was presented at the QC Congress in 1968.

After the project in Kobe Shipyard of Mitsubishi Heavy Industries Co. on "What is the design quality for a ship?" QFD was developed for determining design quality.

During Q&A session, the most important parts was discussed to be "understanding what customer want". One interested question was "how to force government to use this concept?" 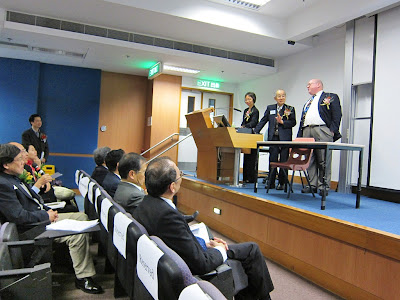 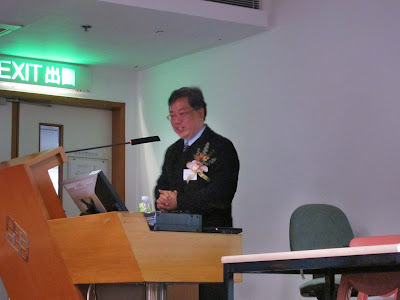 Lean PD included Customer Focus, Design for Quality, Design for Cost and Time to Market to enhance the effective and efficient of Quality, Cost & Delivery (QCD). 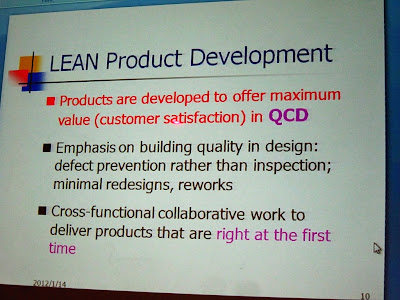 The following diagram showed Lean PD by customer focus and demonstrated the waste that the product characteristics did not met customer requirements. 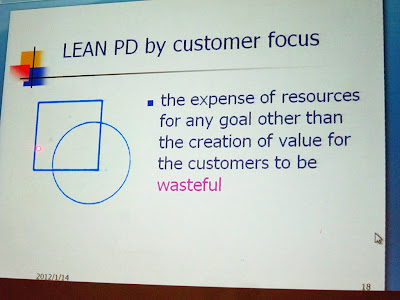 Customer Focus Cycle was introduced for Customer-oriented PD. QFD was employed in the step 2. 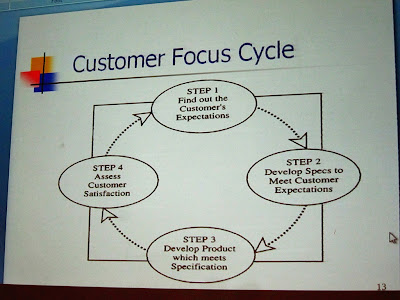 The whole process of Customer-oriented PD was showed in the following diagram.

Then Dr. Chin shared two case studies for QFD application experiences included software company and product with technological features. At the end he concluded that "QFD is not an easy process. It takes leadership and determination on the part of many people to dedicate the time and energy needed. But that effort pales in comparison to the effort expended in a poorly planned project." 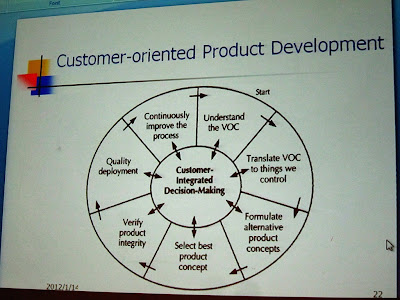 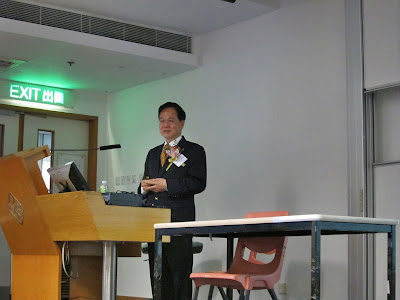 Then he briefed the Design for Six Sigma (DFSS) which used to design the product and process to eliminate defects before they occurred. Its structure framework was DMADV (Define, Measure, Analyze, Design and Verify). Moreover, he identified the QFD's position for Business Growth. 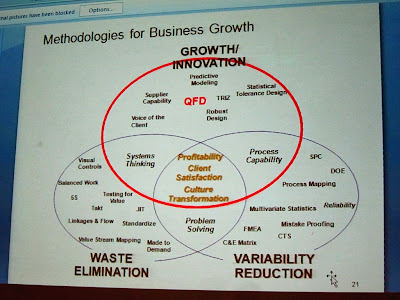 After that Dr. Chan introduced the combination of QFD and DFSS through different steps as following diagrams. QFD would be started after the Define Phase of DFSS. 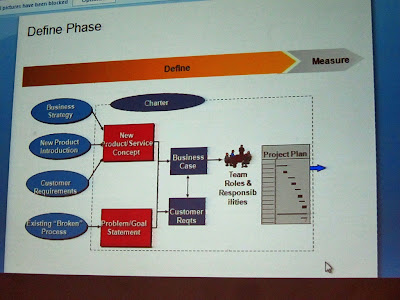 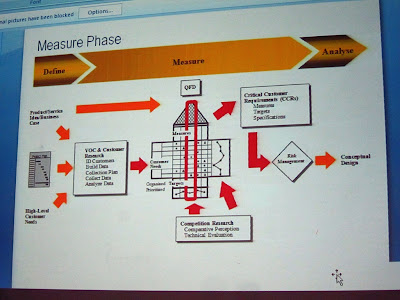 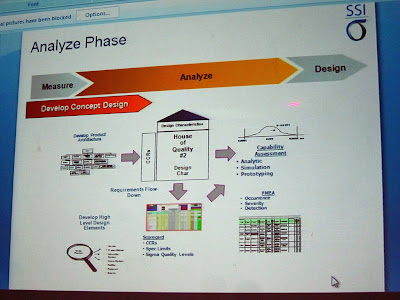 QFD Phase 3 and DFSS Design Phase: The highest priority process characteristics relating to key characteristics of the product design would have been identified and would be focus on any manufacturing process design work. 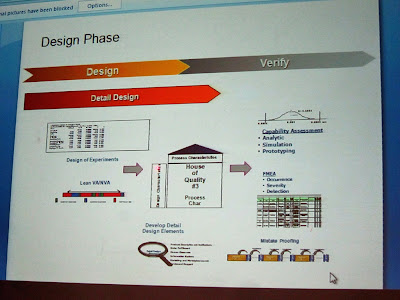 QFD Phase 4 and DFSS Verify Phase: The key controllable elements relating to the manufacturing process would have been identified and it would be the input of the process control plan. 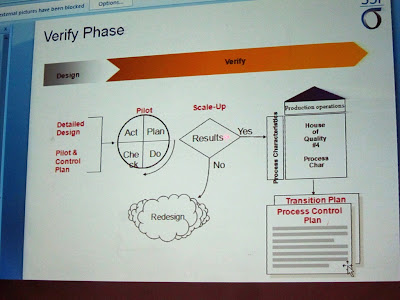 Dr. Y.K. Chan concluded that QFD translated customer needs and expectations into appropriate design requirements and the results of being customer-driven would achieve total quality excellence. 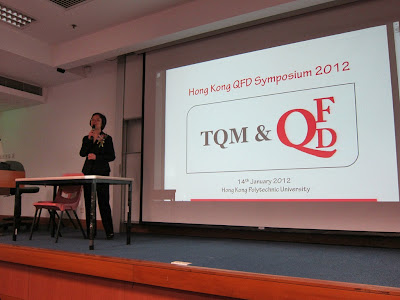 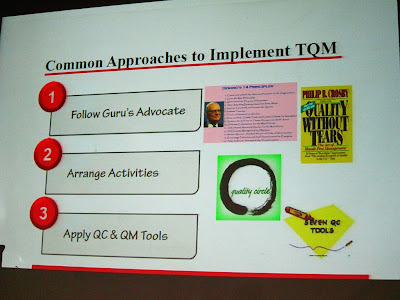 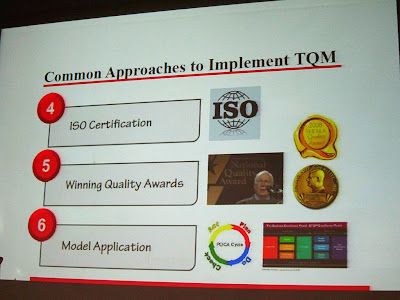 Then she briefed three important issues of QFD included:

Based on those issues and QFD characteristics such as logically alignment, Vertical & Horizontal Communication, and implementation via projects, she had a confident that QFD could support TQM on meeting today's challenges through innovation.

Finally, Dr. Catherine Chan concluded that QFD was a strategy for sustaining survival and attaining prosperity 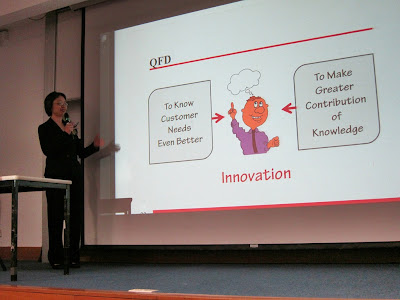 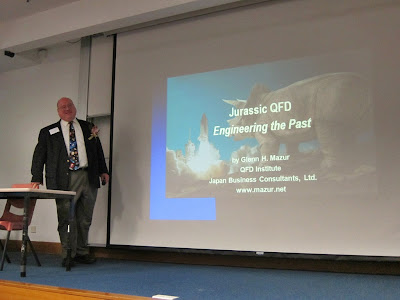 This talk was related to the movie "Jurassic Park". The aim was to build the most realistic dinosaur ever seen. However, it was met many challenges. 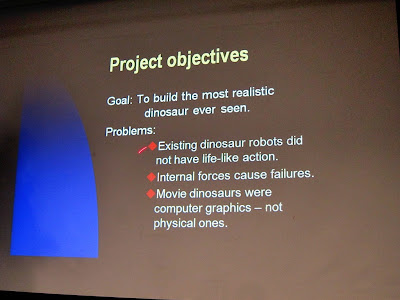 Gemba (現場), observation in the real place, was employed for this project. It was found that 70% of the interaction between small children and animals is at the head and eye contact was essential.

It employed QFD to collect Voice of Customer (VOC) as follow table. 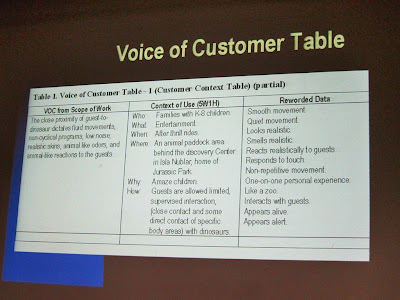 Mr. Mazur said that project was very successful and obtained different awards. One important term emphasized by Mr. Mazur in this topic was "Emotion Quality"! 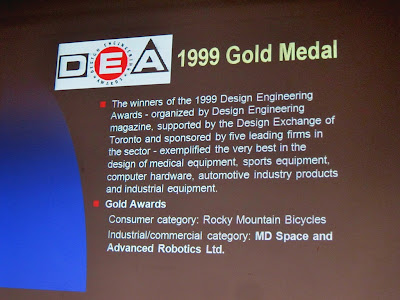 After presentation of appreciation certificates to speakers, we took a group photo. 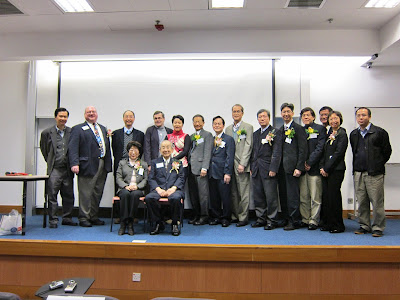 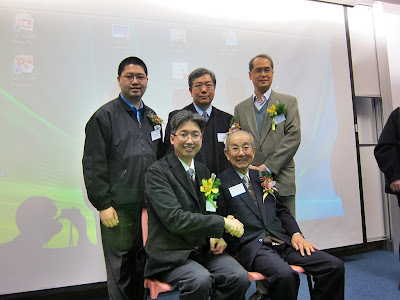 I took a photo in front of the symposum banner for memory. 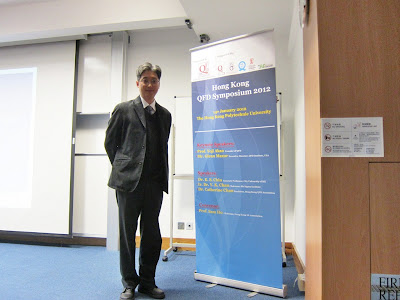 The Institute of Purchasing & Supply of Hong Kong (IPSHK) - http://www.ipshk.org/