The topic in May 2015 of ASQ Influential Voices was “What’s the Future of Quality?” ASQ CEO Bill Troy told us a “bit of a departure” from past editions of the ASQ Futures Study report. The first ASQ Futures Study was conducted in 1996. Subsequently, ASQ’s Board of Directors decided to repeat the study every three years. So it repeated in 1999, 2002, 2005, 2008 and 2011. Previous studies aimed to identify key forces that will shape the future of quality. However, the new report entitled “Quality Throughout” in which contained solid 88-page report and is a compilation of essays from experts in their fields, from around the globe. 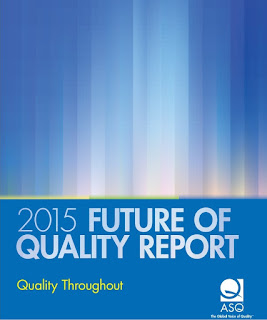 The ASQ Future of Quality Summary of Key Forces from 1996 to 2011 was showed in the following table. (Those discussion in conferences and seminar were recorded in reference) 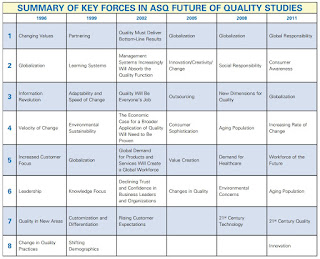 My point of the Future Quality should be matching the Five Technology Megatrends included “The Cloud as Supercomputing”, “Material Shifts”, “Robot Renaissance”, “Manipulating Biology” and “Decrypting the Brain”. (By Allen Yeung at HKETA Symposium on Innovation & Technology 2014) 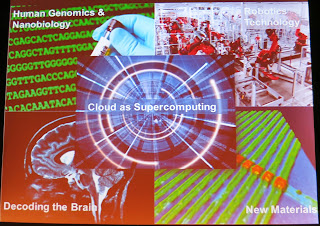 Employing technology based on the megatrends with Quality, I believed that could solve the problem come from population shift (older), environmental pollution, over-production, etc.