Asiaization is the Future of Quality

Asianization (亞洲化) will be a key force of the "Future of Quality". Asian Network for Quality (ANQ), has established since 2002, will take a significant role to contributing to the world economic development through improving quality . Unit now, there are seventeen organization members, two affiliated members and one partner organization (with 18 countries or economic areas). ANQ seeks to improve quality of human life by contributing to the progress of science and technology; and operates following the ANQ Way which is a set of principles included "Harmony in Diversity", "Mutual Respect and Compassion", "Austere and Simple Living" and "Effective and Efficient Use of Abundant Resources". The following map showed the distribution of ANQ members. 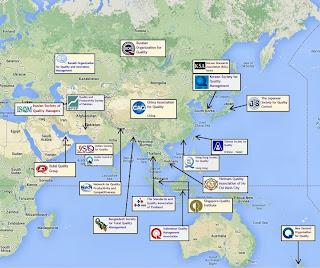 According to ASQ Future of Quality studies, globalization has identified as one of key forces since 1996. Then globalization ranked top three key forces in 2005 (No. 1), 2008 (No. 1) and 2011 (No. 3), respectively. Globalization (全球化) is the process of international business integration arising from the interchange of world views, products, services, ideas, and other aspects of culture. However, different businesses included manufacturing products and services provision will implant in different places because of globalization, so that localization becomes very significant. Localization (本地化) is the process of adapting a product or service to a particular language, culture, and desired local "look-and-feel." Since the global economic direction changed from West to East, the localization process becomes Asianization. Asianization (亞洲化) is an action, process, or result of doing or making Asia-like; implying Asia culture and habit will be more and more important in the world. The following table showed ASQ Future of Quality Studies from 1996 to 2011. 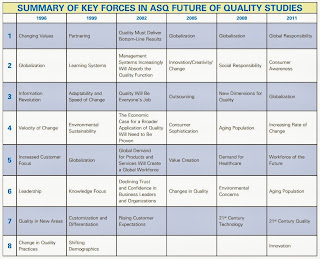 Why Asia become a key area in the world? For instance, BRIC (金磚四國) was coined by Jim O'Neill in 2001 through his paper named "Building Better Global Economic BRICs". It is a grouping acronym that refers to the countries of Brazil, Russia, India and China, which are all deemed to be at a similar stage of newly advanced economic development. And then Kenichi Ohmae (Strategist and future-trend guru) predicted a huge of currency will flow into VITAMIN (維他命十國) included Vietnam, Indonesia, Thailand, Turkey, Argentina, South Africa, Mexico, Iran, Iraq and Nigeria in 2012. Both BRIC and VITAMIN involved some Asia countries. Therefore, I prepare some charts compared GDP and Population among USA, European Union, BRIC and VITAMIN as well as among USA, European Union and ANQ countries. It was found that GDP separated into the three similar portion around 20% to 30% of world GDP. Moreover, ANQ Countries' GDP and Population is observed larger than USA, European and "BRIC plus VITAMIN", individually. 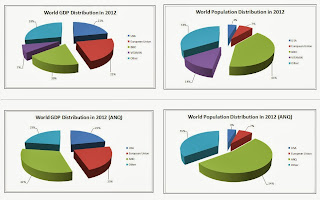 Therefore, I predict that Asianization (亞洲化) will be ranked top three key forces in next ASQ Future of Quality Studies in 2014. 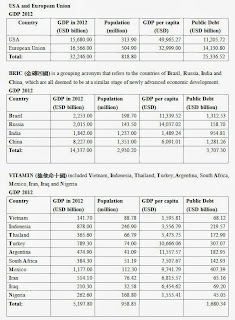 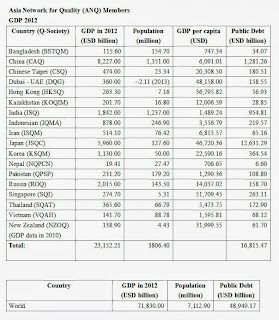 Comment by David Seear (Independent Mechanical or Industrial Engineering Professional) on 29/9/2013.
Lotto, I can only hope one country or region will ensure that quality is used effectively as the approach I see taking place with the revision to ISO 9000 and ISO 9001 in 2015 will do nothing to to improve the poor standing of ISO 9001 Certification. Unless we get "Back to Basics" and ensure that the standard of ISO 9001 auditing is improved we will never regain any credibility. When auditors are advised that they do not need to know what the product or specification for the product is when doing an audit nothing will change. This approach even has a name "System Audit".
If, as proposed, ISO 9001:2015 has new subjective clauses such as "Risk and Opportunity" this will be just another clause that is audited using the "Tick Box" approach.
I truly hope one country or region will stand up and be counted and put controls in place to stop the misuse of the "ISO 9000 Family of Standards". My proposal to put an agreed formal structure for quality standards into ISO 9000:2015 explaining how the Quality Standards should be used can be seen in "www.pdqms.co.uk" and together with other articles and books have been submitted in an attempt to explain why quality has lost its credibility. I wish you luck.

Comment by Harry Staniforth (Director, Harry Staniforth Associates Ltd.)
Isn't it time that the ISO 9001 Standard was written in a format that can be understood by all and not just the technocrats. It will continue to be abused by industry and not a tool for improvement whilst the SME simply uses it as a tool to satisfy the supply chain

Commented by David Seear (Independent Mechanical or Industrial Engineering Professional) on 30 Sep 2013.
Harry, Although I agree ISO 9001 could be explained in a simpler manner I would suggest that is not the problem as too many experts have never read the "ISO 9000 Family of Standards". Many do not know the limited scope of ISO 9001 and expect it to do more.
I can't imagine anyone disagreeing that all organisation should be able to consistently meet their customers requirements and that is what ISO 9001 is all about.
I have recently proposed 10 facts that should be reinterated: -
1. Quality means consistently meeting the customers requirements both now and in the future.
2. A quality management system does NOT mean a documented management system
3. The ISO 9000 Family of Standards are the "Core" standards and should be understood.
4. ISO 9001 certification auditors should understand that the audit only covers how the organisation manages the process used to meet the Product/Service requirements.
5. A so called "System Audit" cannot meet the intention or scope of ISO 9001. (Tick Box audit seeing if clauses 4 - 8 are covered in the organisations management system)
6. All auditors need to know what the specification for the product or service is. If they don't know what the output from a process should be how can they tell if its effective.
7. Auditors should choose a selective sample and carry out a process audit following an audit trail. (Audit Trail is not even defined anywhere) If you don't follow a process where you know what the output should be how can you judge if the system is effective?
8. Stautory and regulatory requirements are only those that relate to the product itself.
9. Each clause should be interpreted against the product or service being provided.
10. ISO 9001 clearly states that ISO 9000 is indispensible for its application and that other management systems such as "Risk Management" are not applicable.
If we could get some of these basic requirements understood and applied we could recover some credbility to ISO 9001 certification. Believe it or not we could even regain credibility for the word "Quality". I see no sign of this in what is proposed with the draft 2015 revisions currently in circulation.

Commented by George Assimacopoulos (Chief Executive at Greek Welding Institute) on 29 Sep 2013.
Very interesting.I humbly believe that Globalization is a more appropriate term. After all there is already plenty of Asiazation in Quality coming from Japan (although the original ideas come from USA) .In order to move ahead, in a positive way, humanity needs talent and innovation on a global scale.
It is very interesting to hear and read the views of other experts on this particular subject.

My reply on 29 Sep 2013
Thanks for your comment.
My paper's logic is from Globalization to Localization -> Asiaization.

Comment by George Assimacopoulos (Chief Executive at Greek Welding Institute)
Dear Lotto, This is exactly what I mean! In my view you must avoid to optimize locally, you must look at the big picture, that is a global scale, and provide a holistic optimization.I hope that I am more clear this time.

My reply:
Dear George,
You are right. Therefore, we need Global Strategy with Local/Asia Wisdom.