Seminar on The Emerging Trend of Accreditation and Certification

In the beginning, Mr. Gregory So (JP, Secretary for Commerce and Economic Development, HK Gov) gave a welcoming remarks. 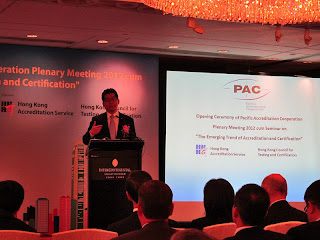 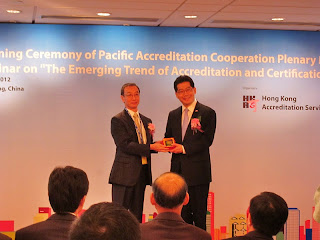 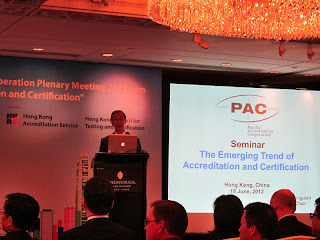 Then the structure of 3rd party Conformity Assessment Scheme (CAS) was introduced and it aimed that "Certified once, accrepted everywhere". 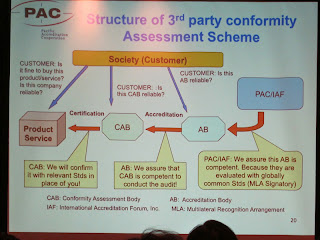 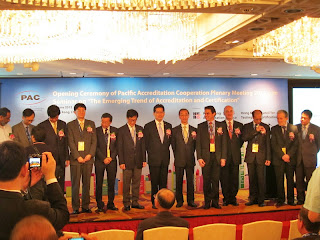 The first speaker was Mr. Brett Abraham (Chairman of the MLA Group, PAC) and his topic entitled "Benefits of Multilateral Recognition Arrangement in Accreditation to Business". The objectives of an MLA were to enhance government, industry and consumer confidence in regional and world trade; and to support emerging industries and technologies by providing accreditation to certification bodies. 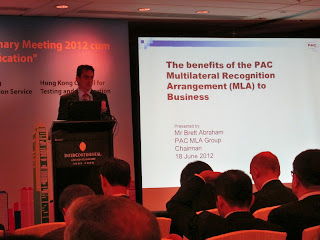 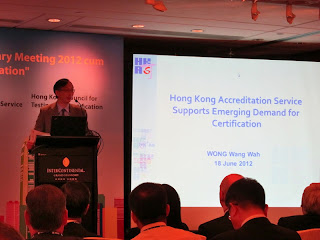 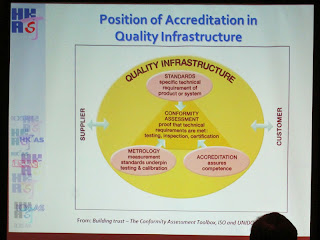 Mr. Graham Talbot (Chairman of the European Co-operation for Accreditation (EA)) was the third speaker and his presentation title was "Accreditation and Market Access in Europe". Mr. Talbot said to promote free trade in Europe that it did not create or maintain barriers to intra-EU trade. New legislative frameworks (Regulation EC 765/2008, 764/2008 and Decision 768/2008/EC) were introduced to focus on marketing of products included market surveillance and accreditation which published in August 2008 and came into force on 1 Jan 2010. 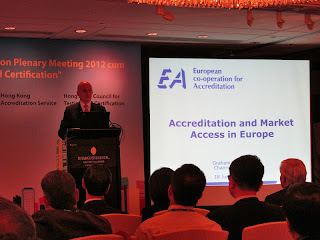 The role of EA was to define, harmonize and build consistency in accreditation as a service in Europe, and to maintain a multilateral agreement (MLA) on mutual recognition between the accreditation schemes. The EA accreditation on different schemes in 2011 was demonstrated below. 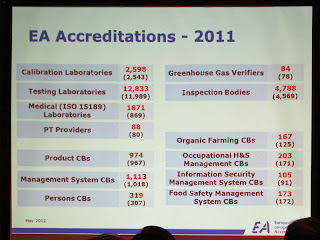 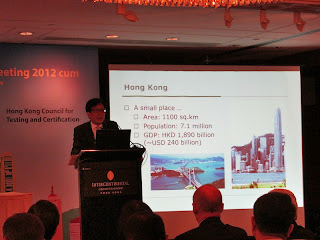 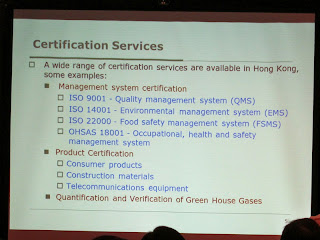 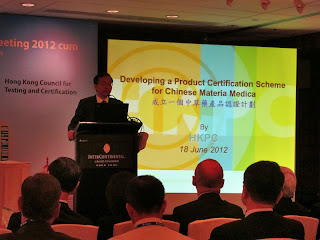 The objective of the Product Certification Scheme (PCS) for Chinese Materia Medica (CMM) were to promote and develop the local testing and certification services in the area of Chinese materia medica; to build and protect the consumers' confidence and health; and to assist Chinese materia medica traders or suppliers to achieve quality excellence and build up branding. The development and implementation arrangement of this PCS for CMM were showed below. It involved accredited certification body and laboratory. 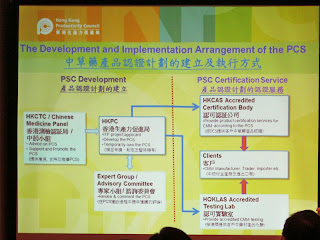 The sixth speaker was Mr. Anil Jauhri (Director, the National Accrditation Board for Certification Bodies, India) and his title named "Accreditation and Certification Scheme for Ayurvedic Medicines in India". 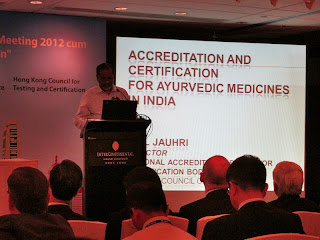 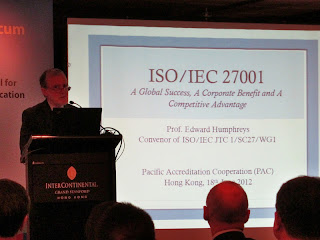 Prof. Humphreys said the implementation of ISMS improved management of risks to reduce threats, to minimize impacts and reduce costs, as well as, to protect business assets. The ISMS implementation in Cloud and Web services would be the trend for increasing competitiveness. Prof. Humphreys mentioned that ISO/IEC 27001:2005 currently was under revision to harmonize structure and some future developments were included Cloud Computing (ISO/IEC 27017/27018), Protection of Personal Data, Telecoms (ISO/IEC 27011), IT Service Management (ISO/IEC 27013) and Finance (ISO/IEC 27015), etc. 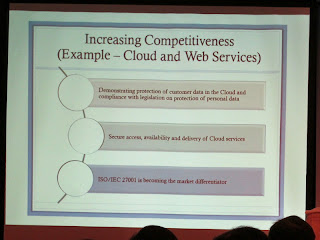 Q&A Session
During the Q&A Session, I had a question about the Product Certification Scheme (PCS) for Chinese Materia Medica (CMM) that there were no reference material provider for Chinese Medicine. The second question I asked to Prof. Humphery about the version of ISO/IEC 27001 to consolidate the 133 control objective and controls. 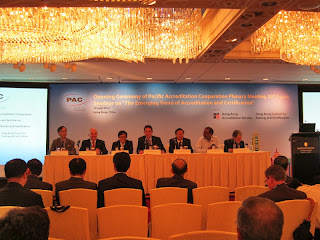 Mr. Jianhua Xiao (Chief Executive, the China National Accreditation Service for Conformity Assessment) was the first speaker in afternoon session and his presentation topic named "The Role of Green Certification and Accreditation in the 12th Five Year Plan of China". 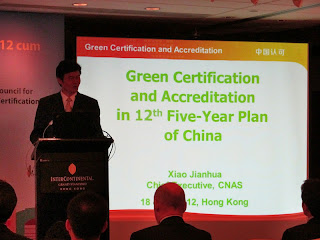 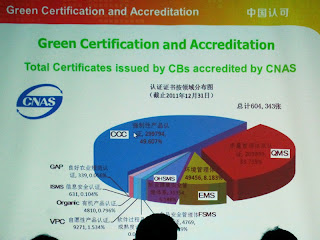 Mr. Chuen-Fai Wong (Principal Environmental Protection Officer, EPD) was the second speaker of this session and his topic was "Importance of Greenhouse Gases Validation and Verification of Hong Kong Business". 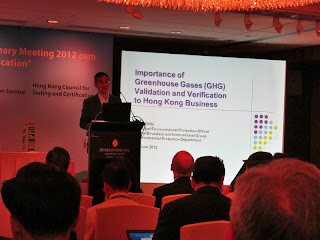 Mr. Wong briefed two importance of GHG local agenda. They were National Communicatins to prepare an emission inventories of GHG in HKSAR and Climate Change Strategy and Action Agenda to reduce GHG and mitigation measures. Hong Kong's Target was to reduce 50-60% carbon intensity by 2020 as compared with 2005 level. 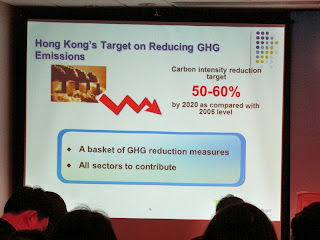 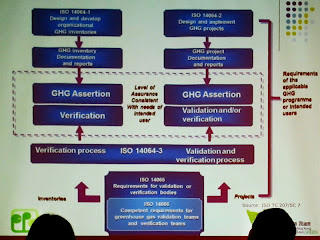 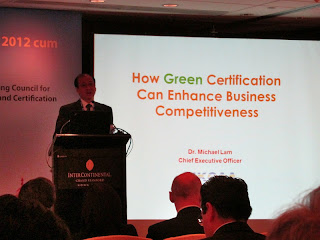 Dr. Michael Lam said HKQAA would like to promote CSR to Hong Kong. Then Dr. Lam discussed how many crisis we faced such as financial crisis, climate change crisis, uneven distribution of wealth, etc. Customers had higher expectation of CSR performance of corporations. It could also be opportunities that certification added value to business. 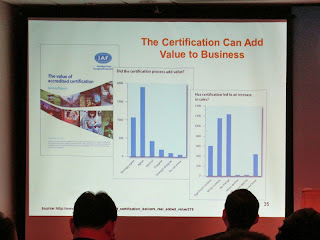 Finally, Dr. Lam would like to work hand in hand to uphold the credibility and effectiveness of certification. 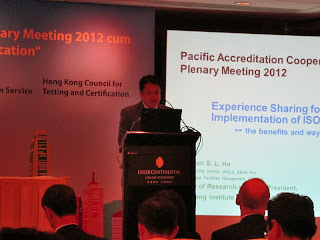 Mr. Ho introduced the 22 hectare Hong Kong Science Park, which provided 20 state-of-the-art laboratory-fitted buildings offering 220,000 square meters of office space with Fully equipped laboratories and engineering services available for hourly rental or on project basis, and Commitments on Green and Sustainability Initiatives. He mentioned the achievement of ISO 50001:2011 certification for FM of HKSTPC by Sep 2011. Total energy saving was 9.5%, HVAC saving was 15% and Lighting saving was 1.5%. 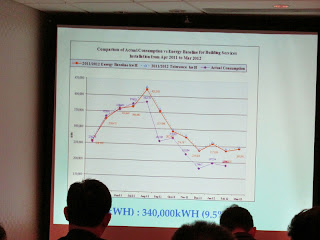 Q&A Session was held at the end of seminar. 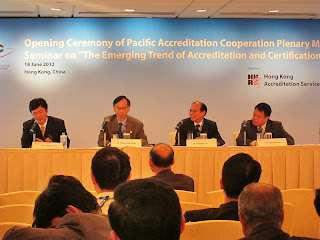