HKQAA Symposium 2012 was annual big event organized by Hong Kong Quality Assurance Agency (HKQAA) and it was held on 30th November 2012. Hong Kong Society for Quality (HKSQ) was one of supporting organization and the event counted as the final activities in World Quality Month. The symposium’s frame entitled “Farsighted Management Strategies in an Unpredictable World” and I summarized it below for sharing.

I took a photo with HKSQ & HKQAA friends in front of the symposium banner. 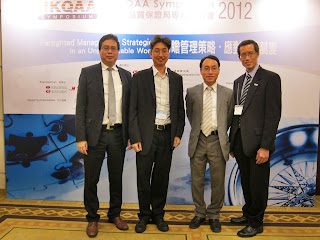 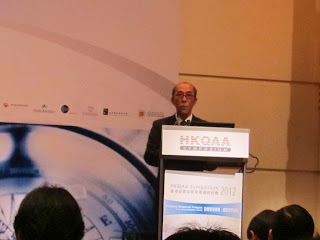 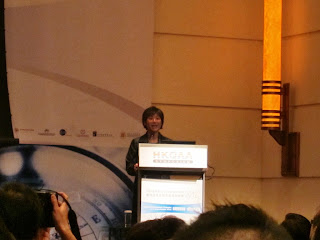 Ms. Connie Sham introduced the project "HKQAA SBI Benchmarking Research" which was funded by the Sustainable Development Fund from the Council for Sustainable Development. The research aimed to find out the performance of the sustainability of buildings of different types and ages in Hong Kong and to form the HKQAA SBI measurement benchmarks. The methodology was used questionnaire survey for two separated categories of building and the figure was reported on the basis of "per 10,000 square feet of saleable area of building". The figure was based on the last 12 months data. Summary table was demonstrated below. 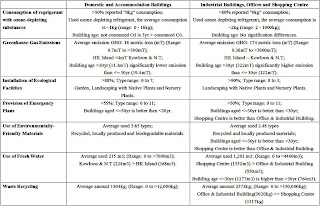 At the end, Ms. Connie Sham showed some photos of real sustainable building for sharing. 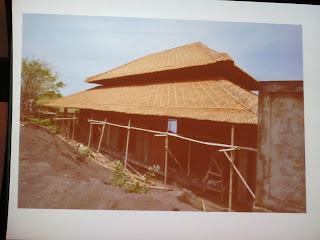 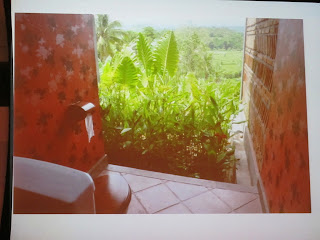 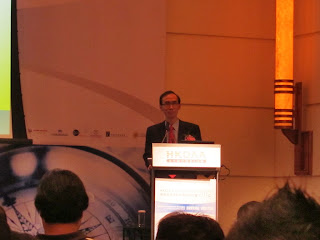 Mr. Chan introduced the Core Values and Commitment of Housing Department. Then he explained their Building Sustainability Strategy which separated into three levels. They were Corporate Level, Operation Level and Community. For Operation Level, sustainability-focused maintenance strategy was employed. The total maintenance scheme was launched in 2006 and conceptual model was showed below. 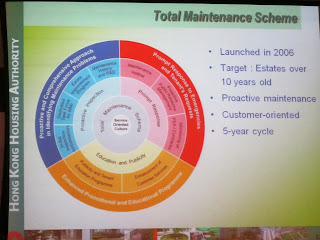 Comprehensive structural investigation programme was introduced such as "Multi-pulse sequencing to rectify basement water leakage" and "Hydro-scarification to remove delaminated concrete from slab". Then Estated Improvement Programme was also mentioned. 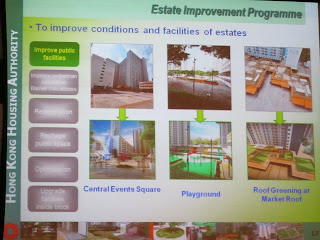 It was found electricity consumption was reduced continuously. Mr. Chan said the challenges ahead included facilitate the aging population living in the existing buildings and cater for future needs of next generations; higher expectation from the public; and more stringent statutory requirements. 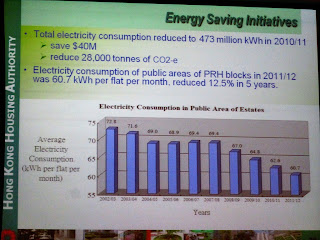 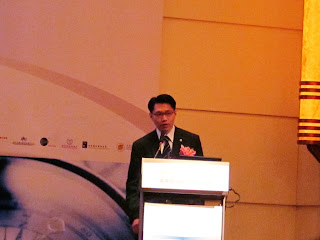 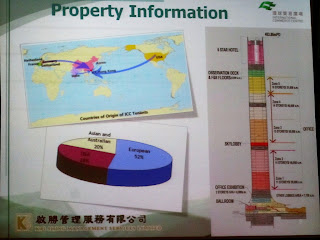 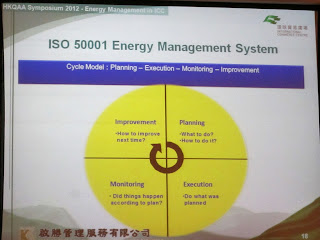 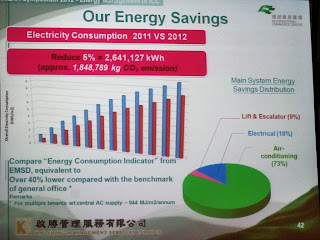 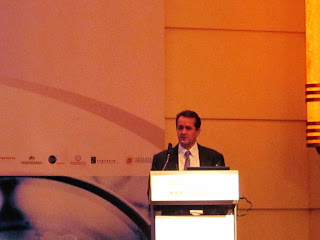 Mr. Rick Truscott introduced the effective maintenance in Power Stations were crucial to ensure asset reliability and operational efficiency. Then he introduced the journey to Relationship Contracting. 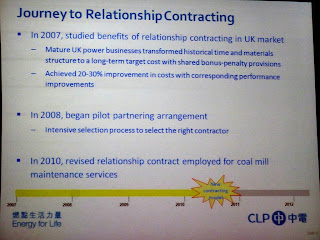 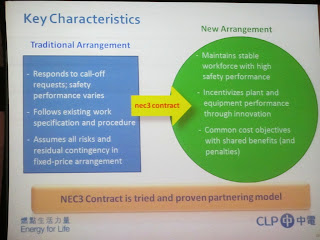 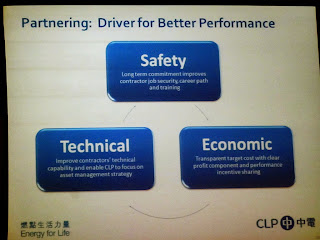 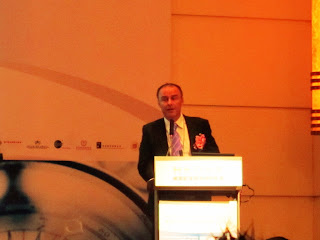 Firstly, Mr. John Lamond introduced Hong Kong International Airport (HKIA) which had two runways (3800m) and their international passengers (52.75M) was the third busiest in the world in 2001. For international cargo throughput, Hong Kong is the number one (3941k). 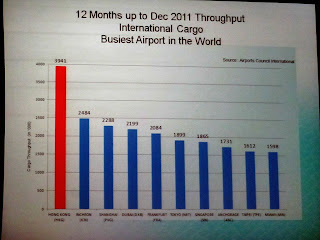 Then Mr. John Lamond briefed HKIA risk landscape in the slide. He quoted some regulatory compliance framework for reference such as Internation Standards & Recommended Practices (ICAO). 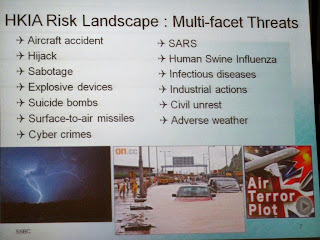 After that Mr. John Lamond mentioned HKIA Risk Management Philosophy that validated measures in place to enable an immediate, pre-planned, proactive and validated response to any foreseeable and probable disruptions in order to minimize negative impacts to the Authority's operations, reputation and profitability. The following Emergency Procedures Manual (EPM) used in HKIA. 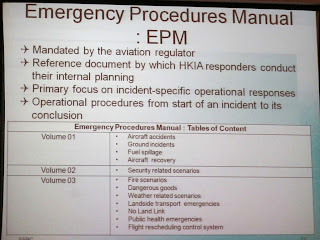 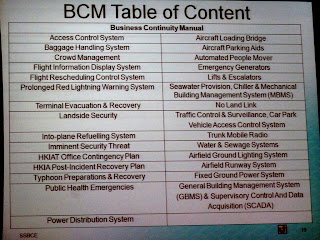 The linkages between BCM and EPM was demonstrated. Mr. John Lamond summarized that their risk management, business continuity and crisis managmeent aimed to maintain the flows of passenger, baggage, cargo, aircraft and information safely. 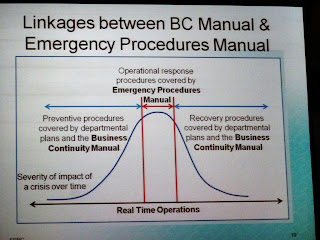 Panel Discussion was performed at the end of Morning Session and the guest moderator was Dr. Nigel Croft (ISO Technical Subcommittee on Quality Systems (ISO/TC176/SC2)). 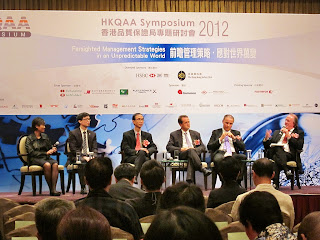 At the end of the symposium, Ir. C.S. Ho (Deputy Chairman, HKQAA) gave a closing remarks. 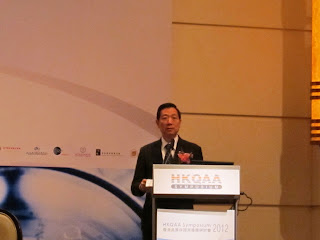