The ASQ's Future of Quality Study 2008

I would like to introduce the quality professional futures study by American Society for Quality.

The first ASQ Futures Study was conducted in 1996. Subsequently, ASQ’s Board of Directors decided to repeat the study every three years. So it repeated in 1999, 2002, 2005 and 2008. Each of these studies was expected to identify key forces that will shape the future of quality. The seven key forces of change ranked in order of perceived significance in ASQ’s 2008 Futures Study Report are: 1) Globalization; 2) Social Responsibility; 3) New Dimensions for Quality; 4) Aging Population; 5) Heath Care; 6) Environmental Concern and 7) 21st Century Technology.

Table 1 lists the key forces of change from all the ASQ Futures Studies completed so far. 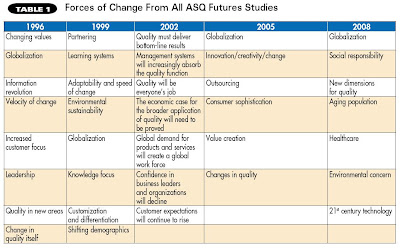 Globalization dominates the future of quality both in the study in 2005 and 2008. The second one is Social Responsibility which becomes more and more significant especially in food industry. New dimension for quality could be considered as innovation plus quality. Aging population and heath care are related key forces. Environmental concern is inevitable both in developed and developing countries. Finally, 21st Century Technology is one of key force that leading to change. In my opinion, it could be biotechnology, renewal energy, nanotechnology, etc.

My list of the 7 forces for the coming 3 years are:
1) Climate changes
2) The depreciation of dollar
3) social responsibility
4) innovation
5) Stagflation
6) Financial management
7) Back to basic