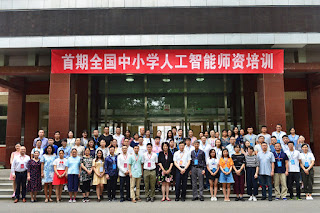 Day 1 (20190719):
I arrived the The High School Affiliated to Renmin University of China and took a photo for memory. 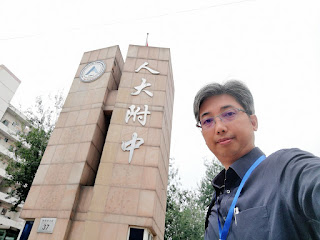 I met a classmate Mr. Bingo Wong (華南師範大學附屬中學黃秉剛) who is from Guangzhou. 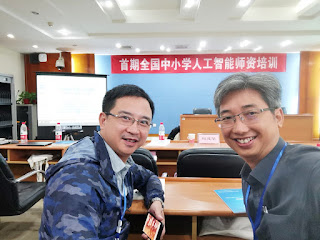 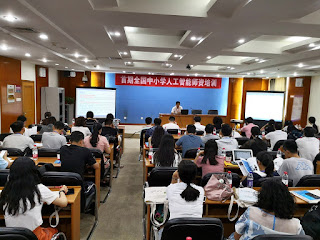 In the beginning, Mr. Ren Changshan (教育部科技司信息化處任昌山副處長) was the first speaker who explained the “Education Policy of AI”.  He briefed the missions included optimization of AI innovation system in higher education, talent training system and AI commercialization and demonstration. 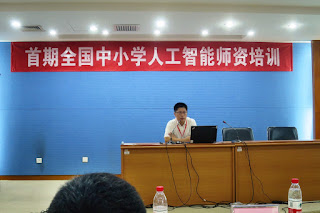 Then Mr. Ren briefed the 10 strategies in education and focused on enhancing Information era education revolution. 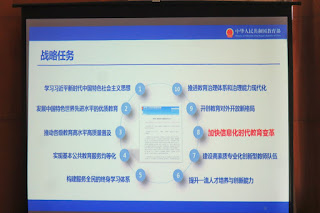 Finally, he mentioned the perspective on China education development on intelligence era. And quoted the Beijing Consensus (北京共識) in the International Conference on Artificial Intelligence and Education (國際人工智能與教育大會) as conclusion. 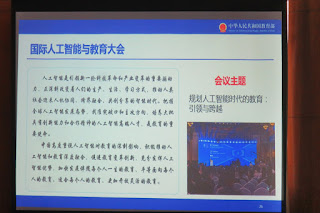 The second speaker was Prof. Tao Jianhua (中國科學院自動化研究所所長助理兼任中國科學院大學人工智能學院院長助理、模式識別國家重點實驗室副主任陶建華研究員) and his presentation entitled “Artificial Intelligence State and Challenge”.  Firstly, Prof. Tao briefed what is AI that is to study and develop the theory, methodology and technology as well as application in simulating and extending of human intelligence. 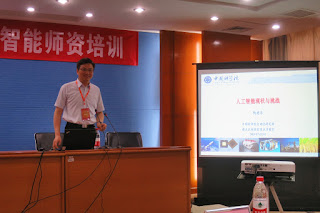 Then Prof. Tao mentioned the three key school of AI and they were symbolicism (符號主義), connectionism (聯結主義) and behavioralism (行為主義).  Then the history of AI development was briefed and we were in the 3rd wave. 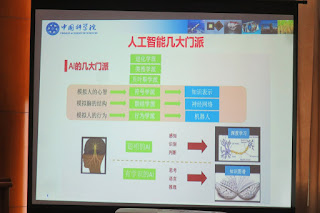 After that Prof. Tao stated the AI from digital world to physical world and from non-critical to critical impact.  Now, it used “AI+X” model to integrate into different industries such as medical, advanced manufacturing, biotechnology, machine-human interaction and culture. 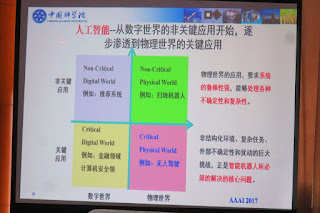 And then he mentioned several bottom neck of AI such as energy consumption, lack of common sense, motion control, etc.  Finally, he stated the new generation of AI and AI2.0 was the new direction of AI development.  He expected some perspectives in the future including human brain cognition neutral model, IoT self-cognition operation system, and super ANN computing and smart robot.  Lastly, he said that the key of AI development was talent so that we needed to invest more in AI education. 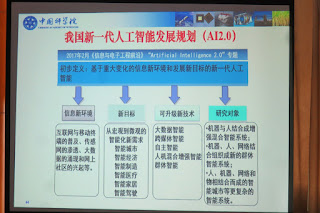 The third speaker was Prof. Zhang Jiajun (張家俊, 中國科學院自動化研究所, 中國科學院大學人工智能學院) and his topic named “Natural Language Processing (NLP) and Machine Translation – Past, Current and Future”.  NLP is using computer to understand different human languages that could be read and wrote. 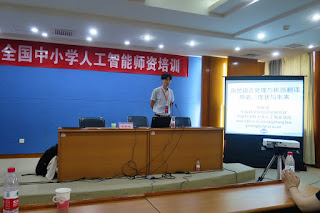 Then Prof. Zhang introduced some challenges on NLP such as large ambiguity in our language and large unknown language. The NLP history were discussed from 1946 to 2015. 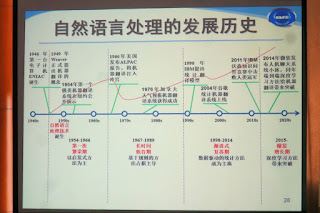 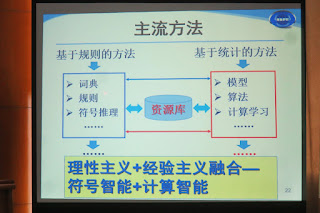 
During the lunch break, we had lunch in student canteen. 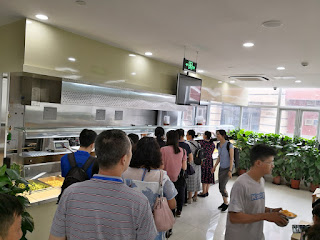 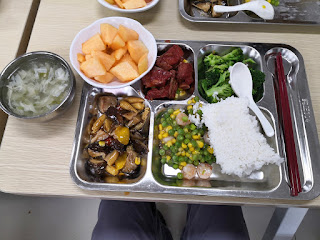 They used automatic payment system for different lunch set. Each disc has RFID for counting price I think. 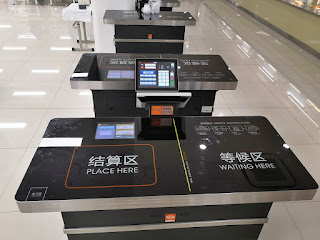 The fourth speaker was Prof. Liu Xiaobi (北京理工大學計算機學院圖像計算與感知智能研究所副所長劉峽壁) and his topic entitled “Artificial Neural Network and its Learning: A History”. Firstly, Prof. Liu explained AI and ANN in simple statements that AI is “to know yourself” and ANN is “to know the brain of yourself”.  It is a bottom-up AI. 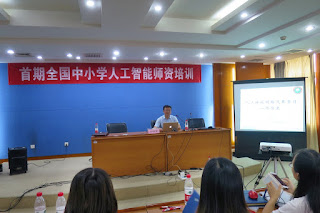 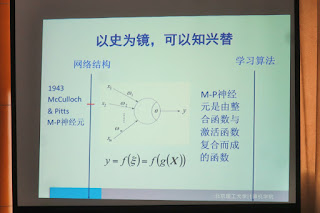 Lastly, Prof. Liu discussed the future development of ANN would be from small sample learning that included Finetune from characteristic study and Meta Learning (learning to learn), as well as, visualization (e.g. Heatmap, Image patch based, Activation map / matrix). 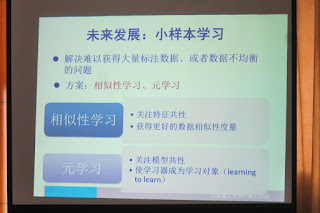 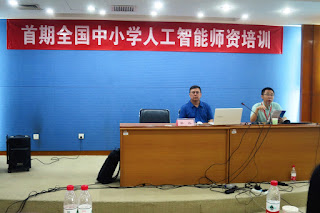 Then Prof. Fan explained why we needed AI course because of training our next generation to adopt smart society.  And then he introduced the course requirement standard such as understanding AI development history, description of AI algorithm realization process, AI application and practical experience, etc.  The following diagram is reference from USA. 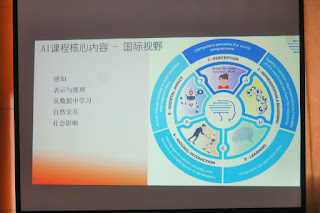 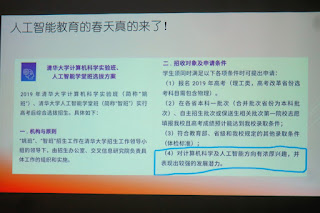 The last speaker was Mr. Yuan Zhongguo (中國人民大學附屬中學信息技術教研組長袁中果) and his topic named “The AI Education Implementation Report of the High School Affiliated to Renmin University of China (RDFZ)”.  He quoted the International Conference on Artificial Intelligence and Education on 16-18 May 2019 that AI course establishment in high school and RDFZ established a pilot class. 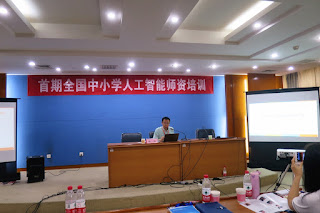 Then Mr. Yuan introduced their IT teachers’ background.  It observed very high education background and upto 53% were doctorate degree. 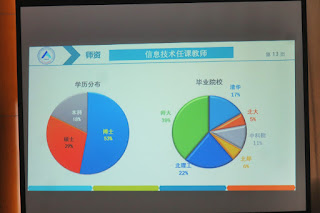 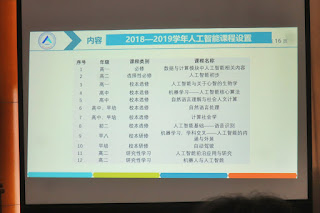 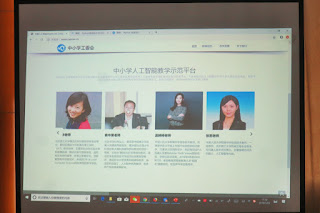