The public forum named “Gutter Oil: Technical, Trade, Heath and Regulatory Perspectives” was organized by Hong Kong Food and Science Technology Association (HKFSTA) and supported by Hong Kong Society for Quality (HKSQ) on 4th Oct 2014. Minda and I represented HKSQ attended the seminar and I would like to summarize the content for sharing.

In the beginning, Dr. Jennifer Wan (Chairlady, HKFSTA) briefed the missions of HKFSTA and she showed a video named “The Making Of Gutter Oil” as introduction. 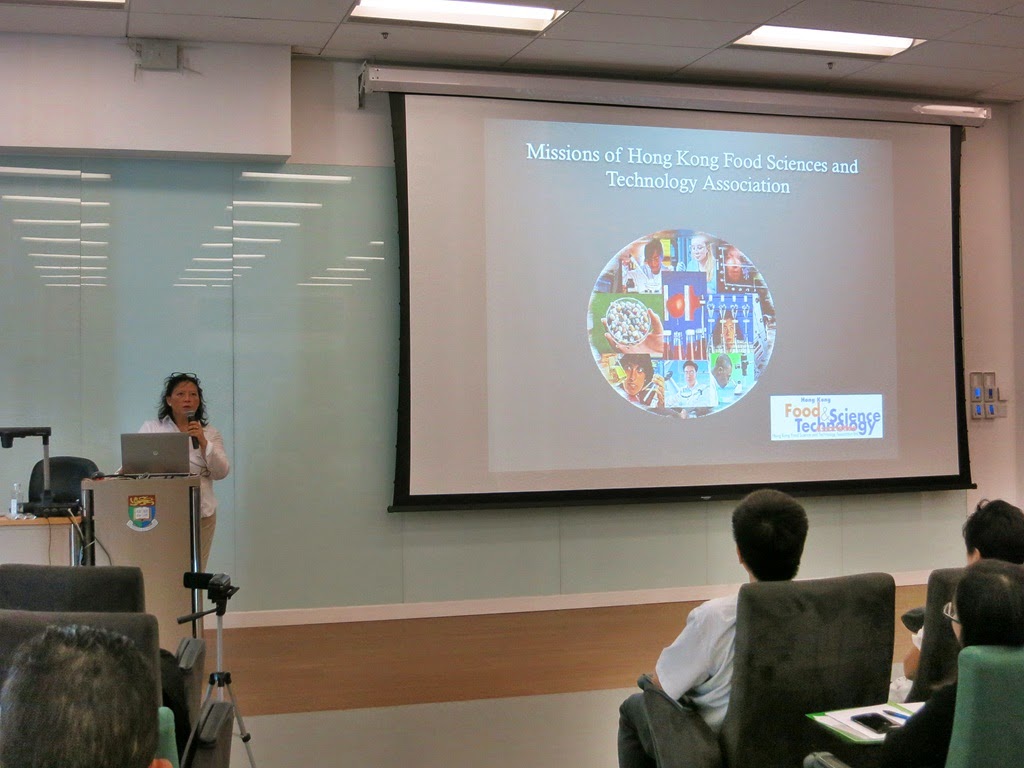 The first speaker was Mr. Stephen Choi (HKFSTA) and his topic named “Gutter Oil Incident from History to Legislation”. Firstly, he defined what is Gutter Oil as below:
i) Illicit Cooking Oil which has been recycled from waste oil from drains and gutters near to restaurants which is later treated and resold to businesses and consumers.
ii) Discarded Animal Parts (Lard) is another version of gutter oil which uses discarded animal parts, animal fat and skins, internal organs, and expired or otherwise low-quality meat which is then cooked in large vats in order to extract the oil. 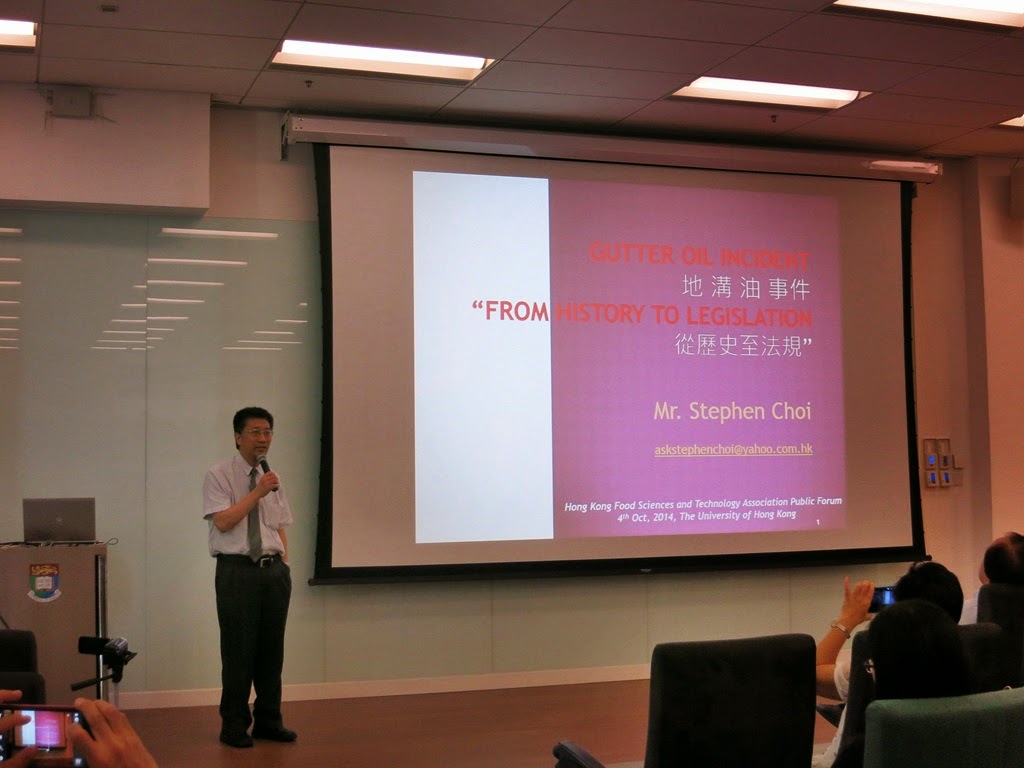 Then Mr. Choi mentioned the reprocessing techniques included very rudimentary Filtration to Boiling to Refining to Removal of Adulterant and then Package & Sold. After that Mr. Choi briefed the history of gutter oil as follows:
- In 1960, Japanese businessman cooperated with Taiwanese businessman to sold gutter oil into Taiwan.
- In 1985, Taiwan found the first self-development of gutter oil and sold upto 2.2 Million ton within 10 years.
- In 1986, 22 people were charged for this illegal production.
- In 2010, Chinese expert estimated about 1 to 10 of editable oil was come from gutter oil. It estimated animal and plant oil used to be 22.5 Million ton in 2010 but the production amount was only 20 Million ton.
- In 2011, gutter oil was found in Shenzhen government canteen.
- In Aug 2012, a company in Shenzhen was found to use gutter oil as raw material for medicine!
- In 4th Sep 2014, Taiwan found 200 ton of gutter oil got into the market from Taiwan famous oil supplier in which some industrial grade oil was from Hong Kong. 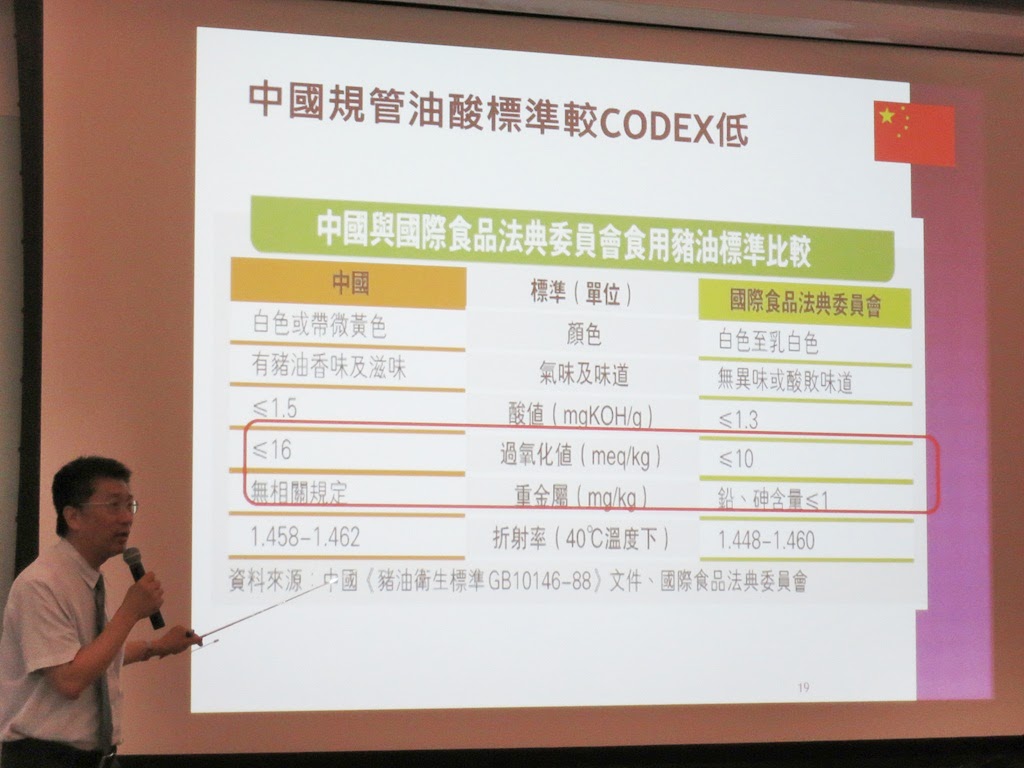 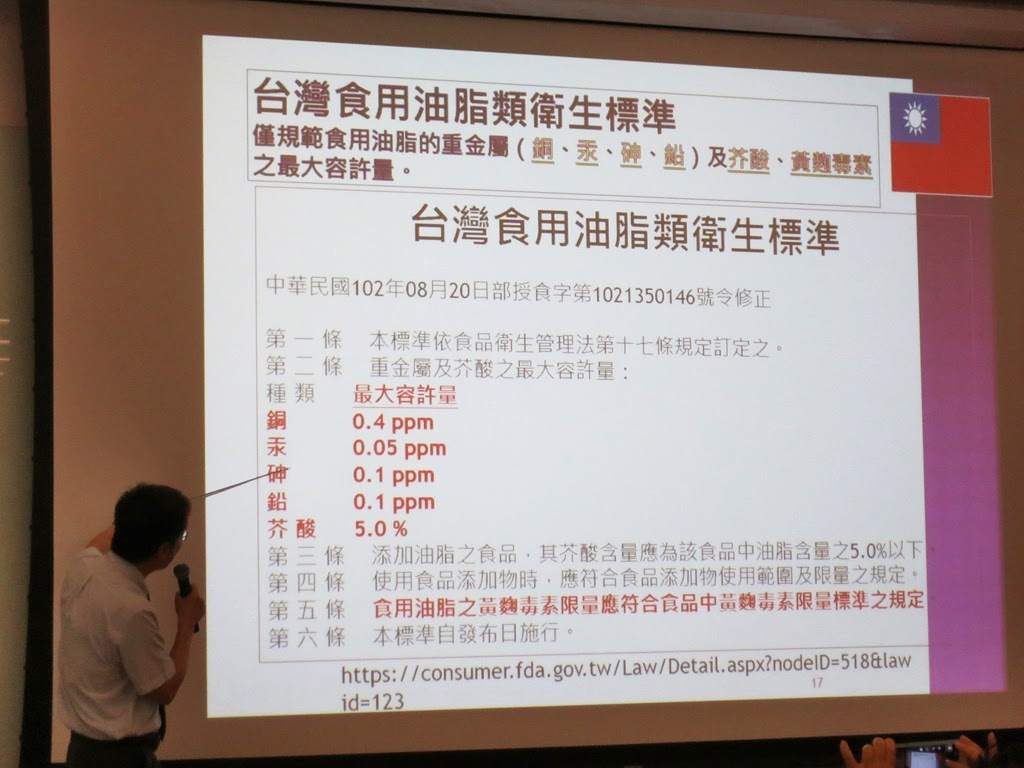 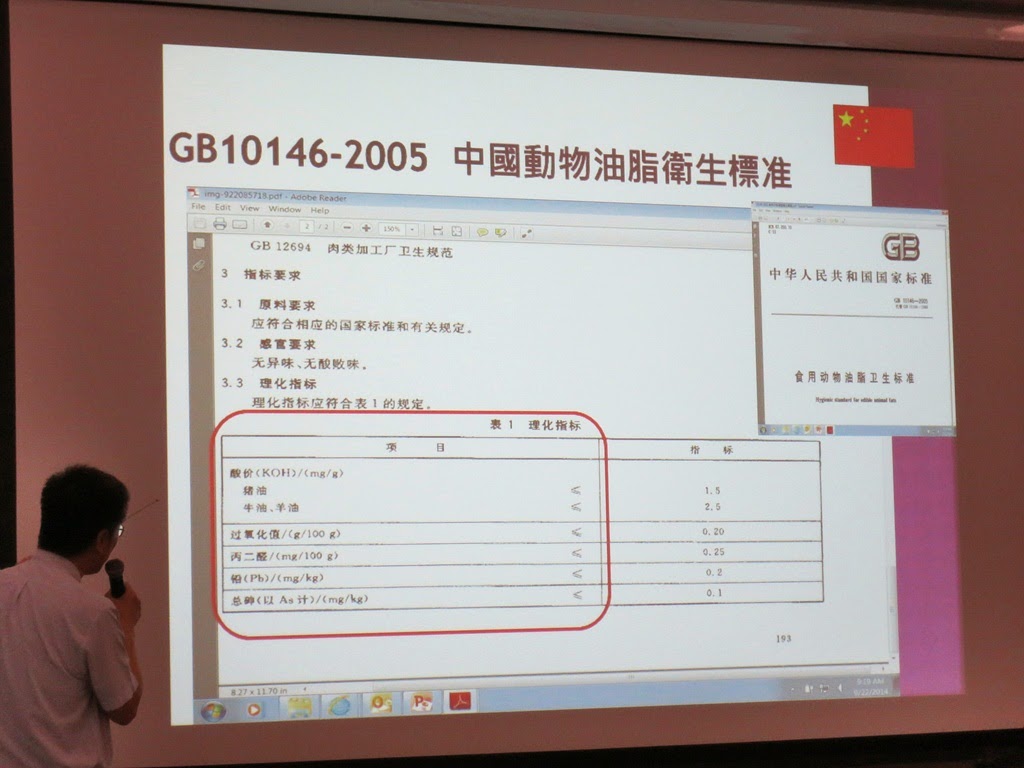 Mr. Choi concluded that there was no scientific method to identify the gutter oil in Hong Kong this moment, even though Benzo(a)pyrene was tested internationally. (Limited of Benzo(a)pyrene in HK & China is 10mg/kg = 10ppm) 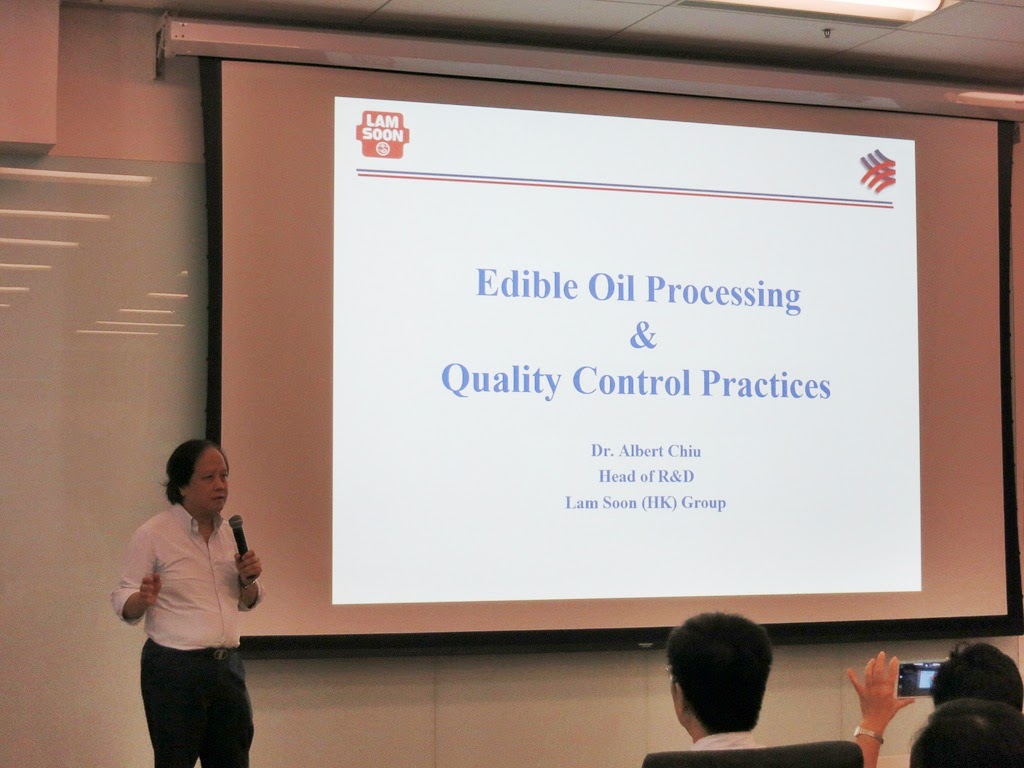 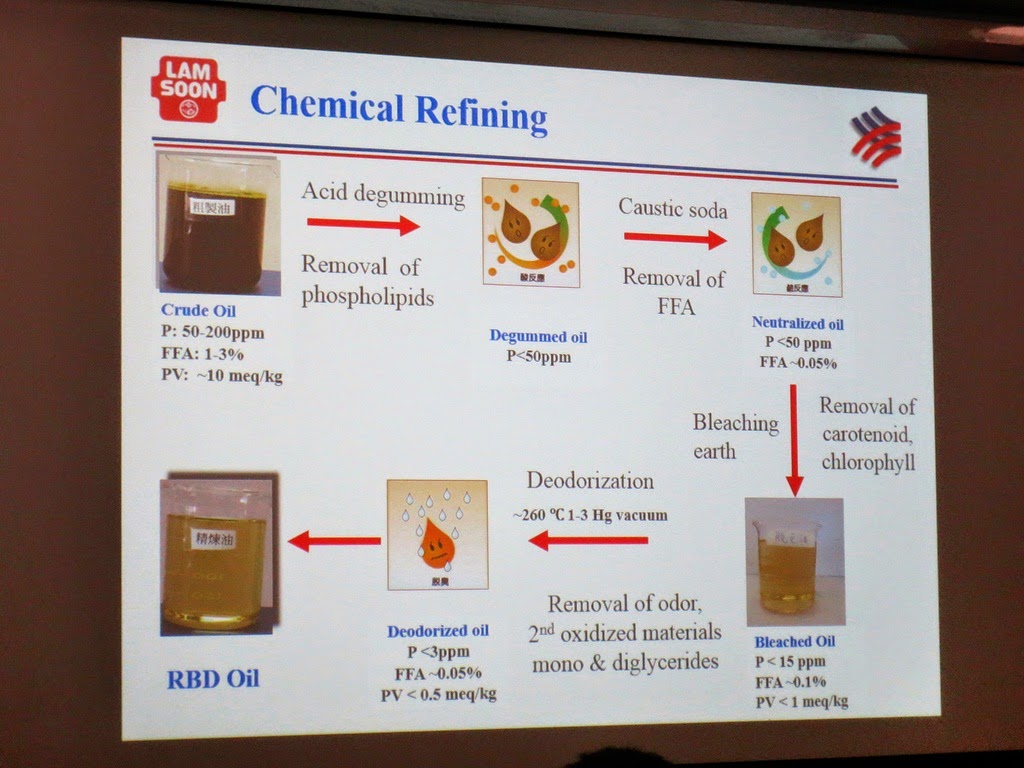 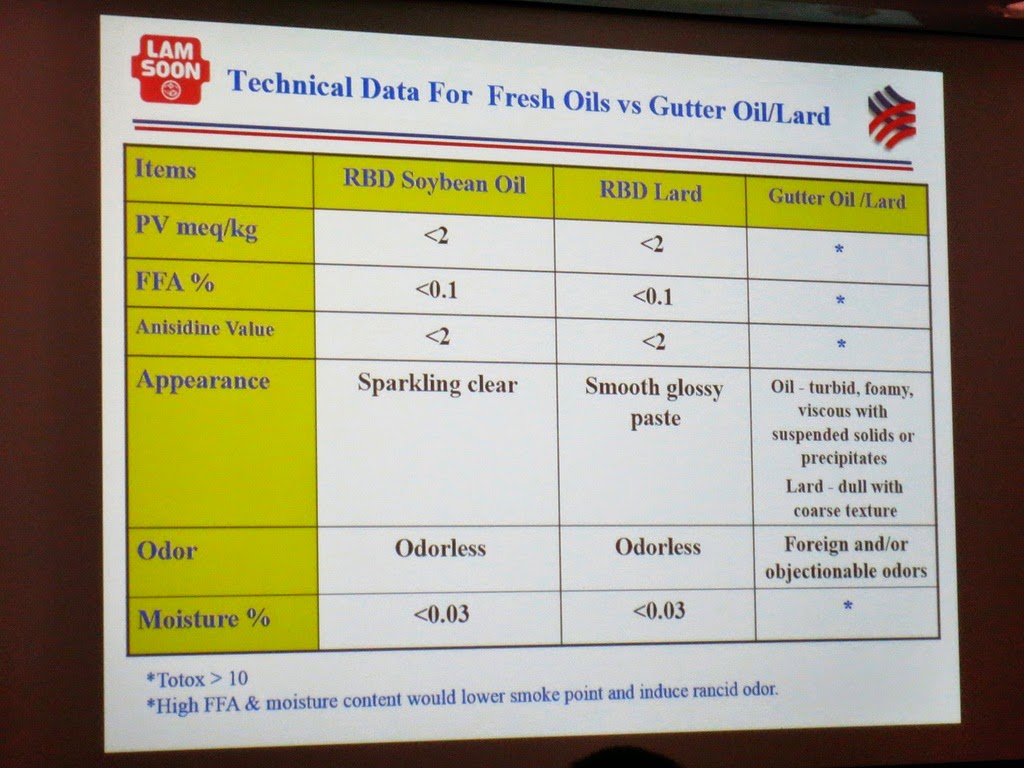 The third speaker was Dr. Ka-Sing Leung (Visiting Associate Professor, ABCT Dept., PolyU) and his presentation was “Overview of Used Cooking Oil”. Firstly, he introduced edible fats and oils which defined in Codex and also mentioned the standard GB/T 8973-2006. 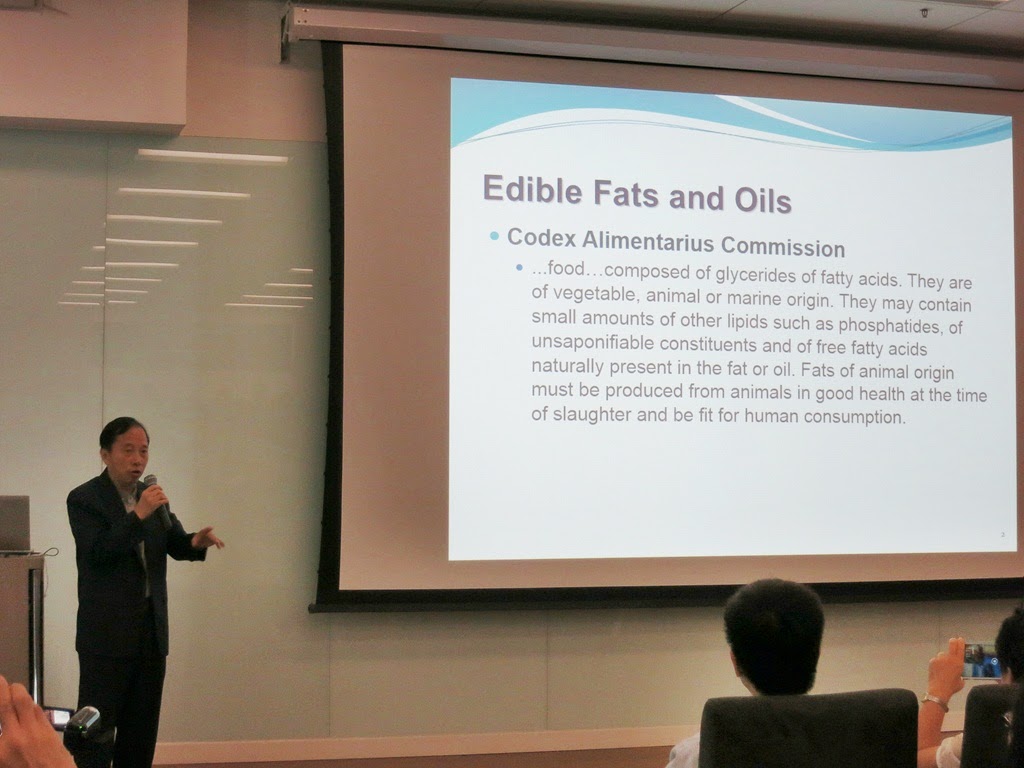 Then Dr. Leung said the edible oil upon cooking would be the following process: Degradation (change Triglycerides to free fatty acids that increasing acid value and decreasing smoke point), Oxidation (formation of H2O2), Polymerization (polymerized triglycerides) and possible contaminants (e.g. food residues and charred particles, as well as, Polycyclic Aromatic Hydrocarbons (PAHs)). We needed to disposal and recycling of used cooking oil but not as edible oil. Even though health risk was low, it still got public concern because of quality issues. Dr. Leung concluded that the most important action was to establish traceability and control mechanism. 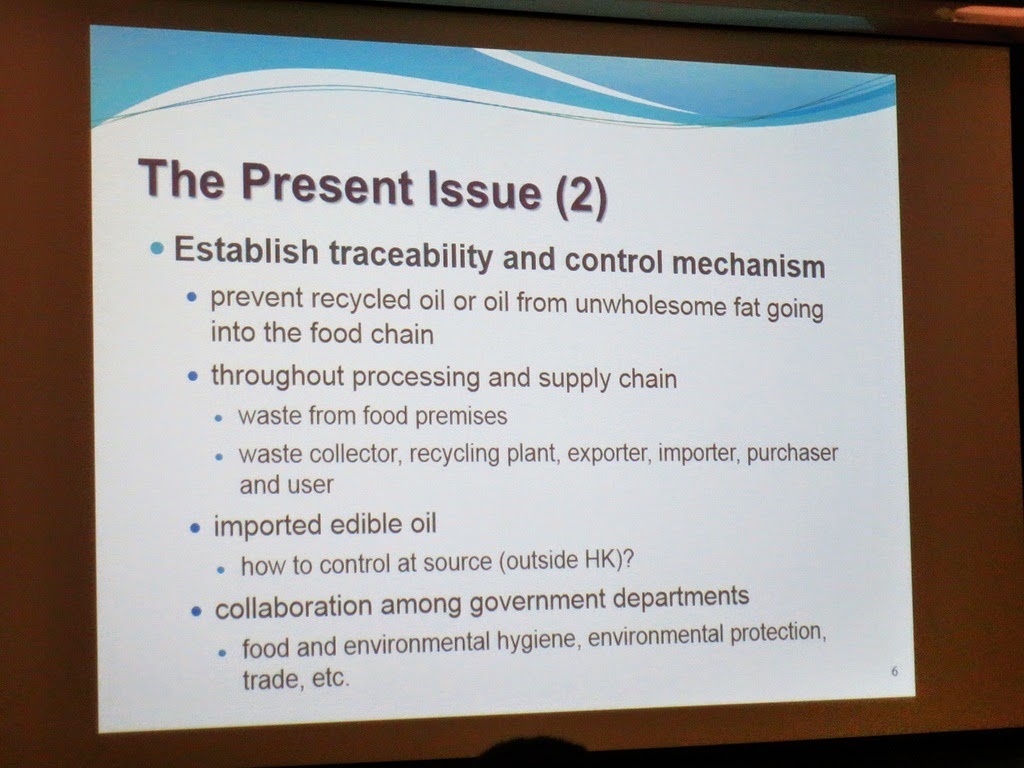 Dr.Jennifer Wan (Chairlady, HKFSTA; Associated Professor, SBS, HKU) was the last speaker and her topic entitled “Gutter Oil the Health Aspect”. She said PAH and Benzo(a)pyrene was by-products which was a dangerous organic pollutant capable of causing cancer with long-term consumption. 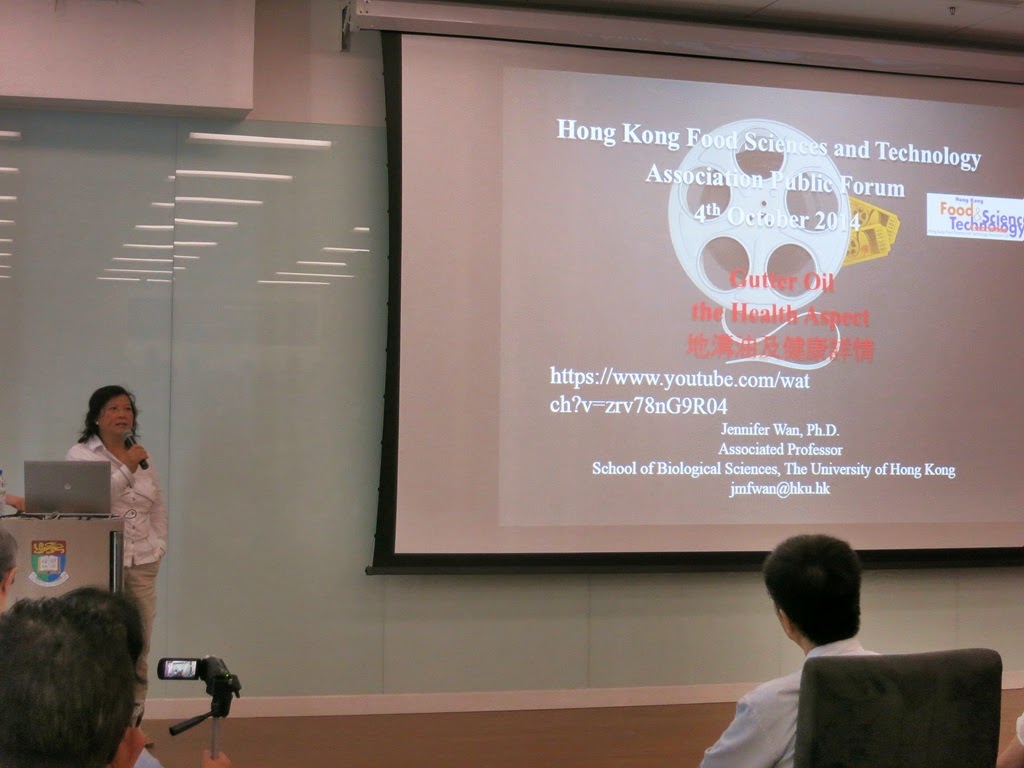 Dr. Wan added another lipid auto-oxidation by-products and toxic substances (e.g. free radicals) would be produced through rancidity, oxidation and decomposition of gutter oil. The short term and long term effects of consuming gutter oils were briefed as following diagram. 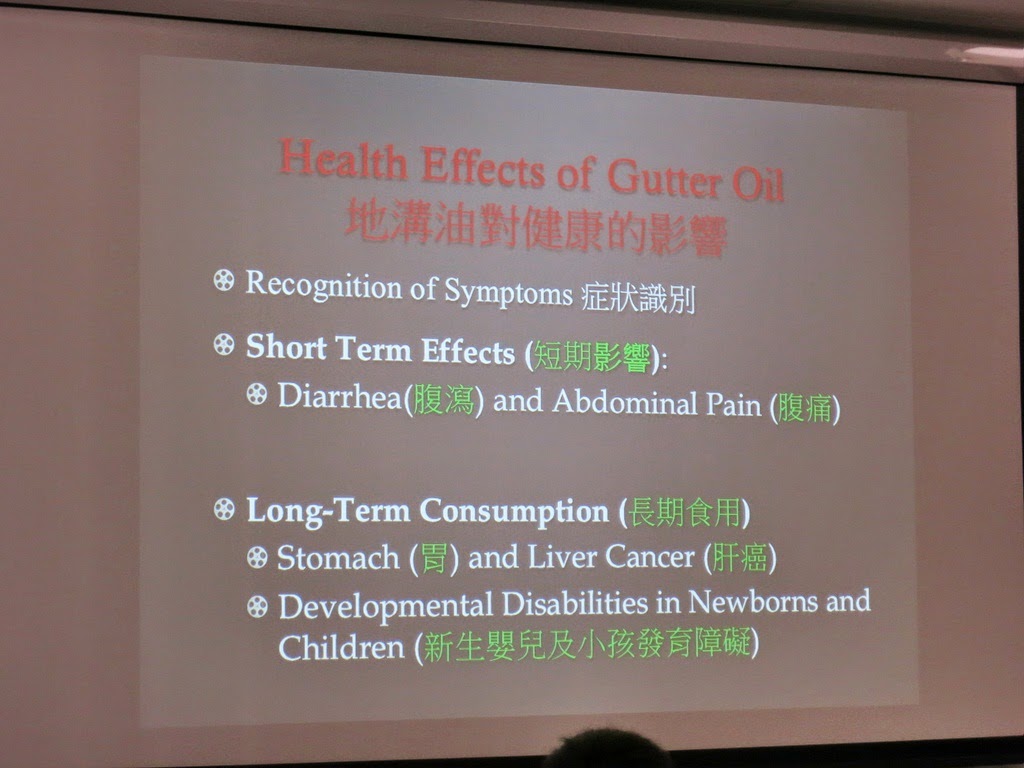 She mentioned quality control at food supply chains were important. Current Chinese law (2012) states that industrial animal fat is not allowed for use in food products because it doesn’t meet basic hygiene standards and contains high levels of potentially toxic chemical substances. However, there are not any nationwide standards in place to assist with this process at present. 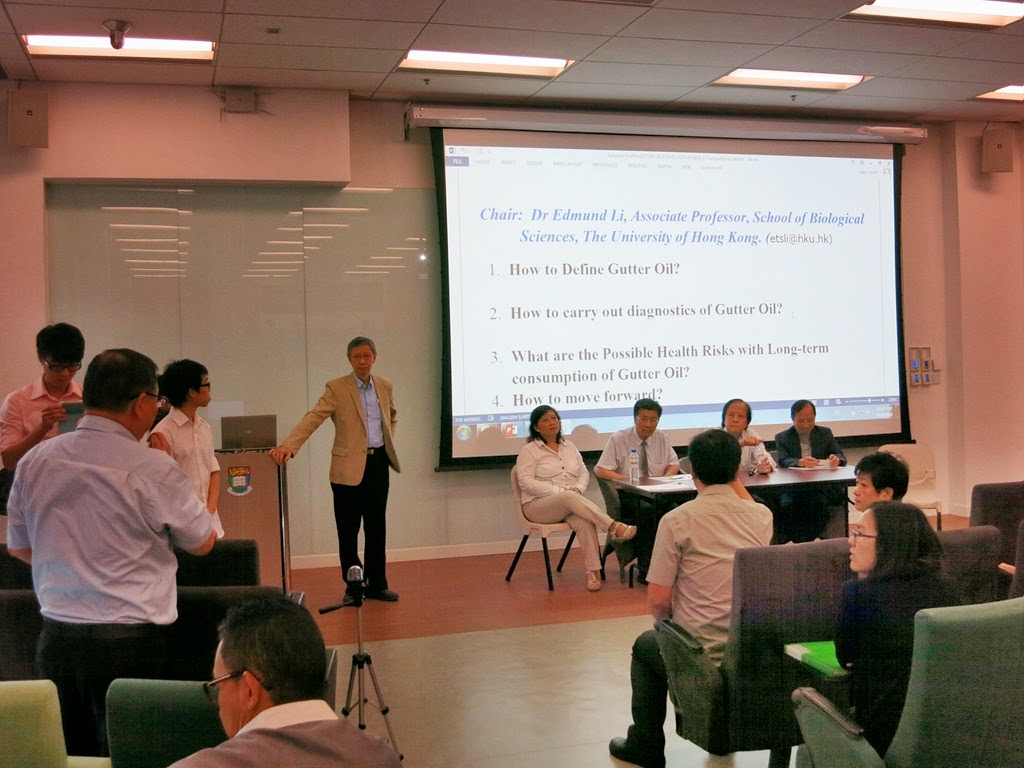 Albert said CSR was very important to avoid this kind of contamination. During the audit, they would consider documentation and operation traceability. Stephen said auditor might not have oil process knowledge that could be missing some important points such as additive and ingredient ratio. I asked there were not chemical indicator to identify the gutter oil even though we were able to use ecotoxicology test to find the total toxicity of oil. Moreover, I also stated“HKQAA - Hong Kong Cooking Oil Registration” Scheme to be one of solution to raise consumers’ confidence.