My father passed away in this Morning. My experience is so bad, which is because not only missing my father but also the arrangement of Hospital in the last week. It makes me to think about the service quality in Hospital and try to determine the gaps through ServQual Gap model proposed by Parasuraman developed in 1985.

I have modified the GAP model as below. 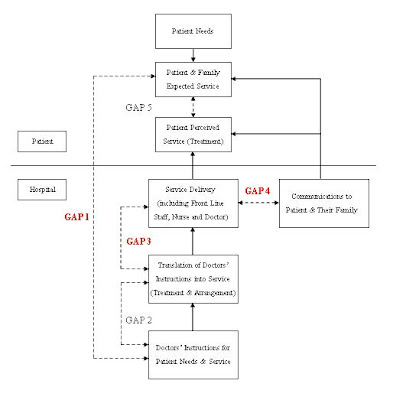 The story of my father (in his last stage) is summarized as follows:

My father was confirmed to have cancer originated at pancreas on 28 Nov 2008. He received bypass surgery on 5 Dec 2008 and discharged on 23 Dec 2008. Then he was sent back to hospital (emergency ward) on 9 Jan 2009 due to infection by “Enterobacter cloacae”. He was arranged to stay in Internal Medicine until 20 Jan 2009, and transferred to Rehabilitation Block. It does not make sense to me and my family that Rehabilitation Block is the suitable place for him. It is because, from our observations in that period, my father needed oxygen supply, his blood pressure was low, and very often we found he was breathless. Moreover, he did not allow eating or drinking. I strongly requested my father to be arranged to “Palliative Cane & Hospice Ward” through a complaint letter on 24 Jan 2009. After transferred to Rehabilitation Block and showering, he cannot speak but write to communicate.


Gap 1: Difference between “Doctors’ Instructions of Patient Needs & Service” and “Patient & Family Expected Service”. In my father’s case, the responsible doctor instructed to transfer my father to “Rehabilitation Block” because there was no response from “Palliative Cane & Hospice Ward”. The service given in Rehabilitation Block is not suitable for patient in his last stage of life.

Gap 2: Difference between “Doctors’ Instructions of Patient Needs & Service” and “Translation of Those Instructions into Treatment & Arrangement”. Nurses and other doctors were followed team lead’s instruction. There is no problem.

Gap 3: Difference between “Translation of Those Instructions into Treatment & Arrangement” and “Service Delivered”, which was the major problem. Front line staffs who took care of my father were found not sympathetic enough such as for showering. It caused my father suffered very much in his end of life. Even though we understand the reason of the responsible doctor to make the decision but the outcome was not satisfactory. When we knew my father was suffering, we employed a registered nurse to look after him (Hospital permitted us informally because of some reasons.) Fortunately, my father felt satisfactory about the special arrangement. (He wrote a Chinese word “順” that means he was satisfactory.)

Gap 4: Difference between “Service Delivery” and “Communications to Patient & Their Family”. Doctors in public hospital were too busy so as it was very difficult to make an appointment with them. We had left message to contact the responsible doctor but no response was received. The problem observed was that front line staffs in Rehabilitation Block did not recognize how the severity of my father was. The situation seemed to be improved after I sent the complaint letter to Hospital Authority and left a copy to the doctor on duty.

Gap 5: Difference between “Patient & Family Expected Service” and “Patient Perceived Service”. This gap depends on the size and direction of the four gaps associated with the delivery of service quality on the hospital's side. In this case, the most important gaps are Gap 1 & 3.

Overall, we appreciate Doctor’s & Nurse’s effort put for my father. I believe their professions. One improvement point of front line staff in hospital is to take care patient’s basic need such as moving, showering, eating, etc. The customer perception comes from the fundamental care and their heart of service.