Cancer Prevention and Intestinal Bacteria (I)

I would like to share what I read from “How the lactic acid bacteria in your daily diet may inhibit cancer?” I will continue to study this topic because my father was found to have pancreatic cancer. It is sad that pancreatic cancer (last stage) cannot be cure but I believe the diet can help to prevent it.

How cancer grows?
Cancer is a mass of tumor cells and each cancer cell is a normal cell that has undergone a transformation.

Growth factors and growth inhibitory factors are proteins that message to multiply, and the latter to stop multiplying, so as to main the certain number of cell.

The so-called accelerator is known as the proto-oncogene that controls the functions of receiving messages at the cell membrane. The gene responsible for applying the brakes to the cellular proliferation process is the tumor suppressor gene.

How genetic malfunction produces cancer cells?
Gene in a normal cell (proto-oncogene):
1. “Antenna” intercepts extracellular message.
2. Messages are correctly transmitted to the cell’s interior.
3. After being scrutinized and processed, messages are transmitted to nucleus.
4. Another gene within the nucleus is activated and initiates and cellular proliferation process.

Malfunctioning gene (oncogene):
1. Malfunctioning “antenna” does not receive messages, but continues to signal cells to multiply.
2. “Antenna” transmits messages not received from outside.
3. Erroneous messages described in (1) and (2) are passed on to the nucleus.
4. The cellular proliferation switch remains perpetually in the “on” position. 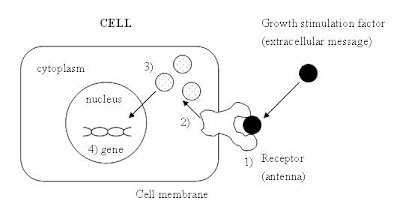 The transformation of a normal cell to a cancer cell begins with the process by which a proto-oncogene becomes an oncogene. The process named initiation and anything that sets this process is known as an initiator. (e.g. viruses (hepatitis B & C); radiation; ultraviolet rays; cigarette smoke and automotive exhaust; and the chemical substances present in charred meat or fish.)

The next stage, extending from when a cancer cell develops until it begins proliferating, is considered a separate process. The process called promotion, and anything that instigates the process is known as promoter. (e.g. sex hormones, secondary bile acids, and chemicals such as saccharin, and artificial sweetener.) 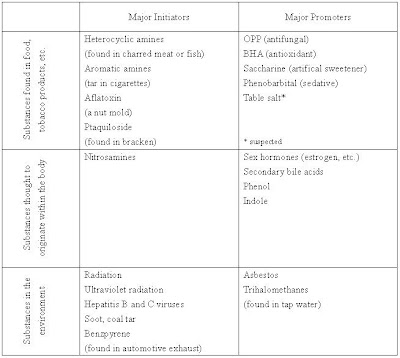 Experiments have shown that vitamins C and E, as well as beta-carotent (a precursor of vitamin A) weaken the action of initiators, and that beta-carotent and vitamin A combat promoters within a cell.

One cancer cell does not constitute cancer
The smallest tumor detectable by various modern medical equipments consists of about a billion cells, weighs about 1g, and measures about 1 cm in diameter. (A cell weighs one one-billionth of a gram, even a growth of a million cancer cells weighs only about 1mg and is about 1mm in diameter.)

A stressful lifestyle or other factors can reduce the effectiveness of the cellular surveillance, rendering the body more likely to allow cancer to progress.