The Executive Study Group (ESG) seminar in September 2014 named “Social Media Strategy – How Xiaomi Uses Social Media to Grow Explosively” which was held by the ESG, Asia Pacific Institute for Strategy Limited (APISL) and the Hong Kong Science and Technology Parks Corp (HKSTPC) on 5 Sep 2014. I would like to summarize the seminar for sharing below. 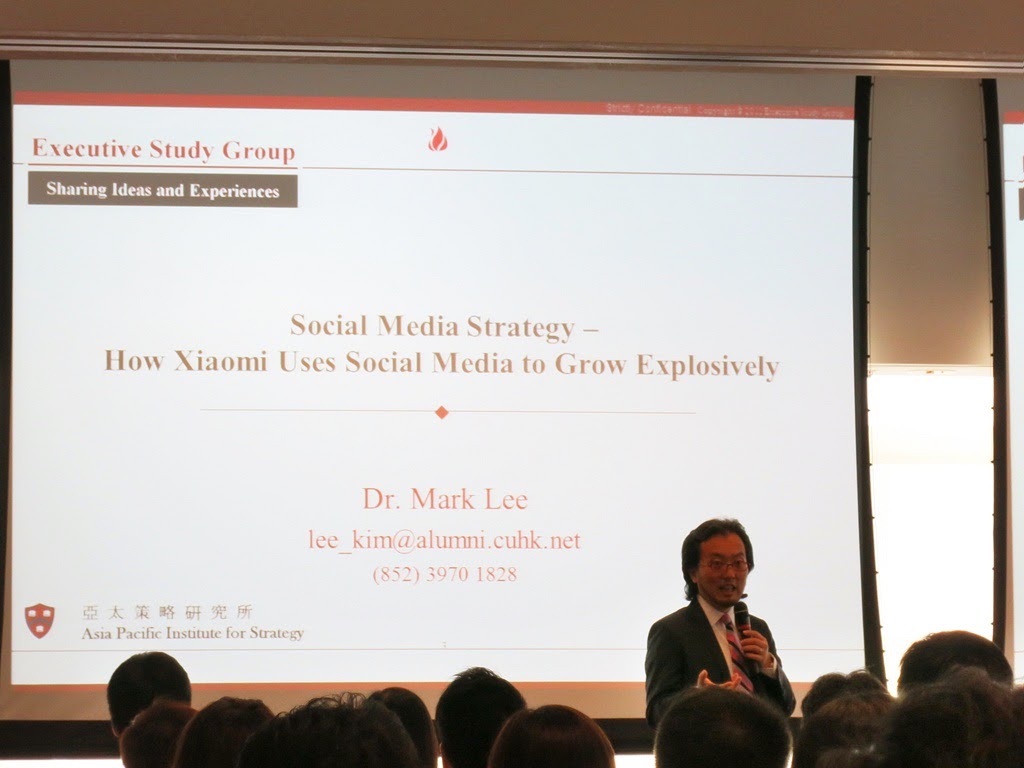 In the beginning, Dr. Mark Lee (Research Director, APISL) introduced a successful case using Social Medium which was Ice Bucket Challenge. Dr. Lee asked how long you missing plastic duck which was very hot in social medium before. So such event would be outdated later. Therefore, we need a social media strategy. 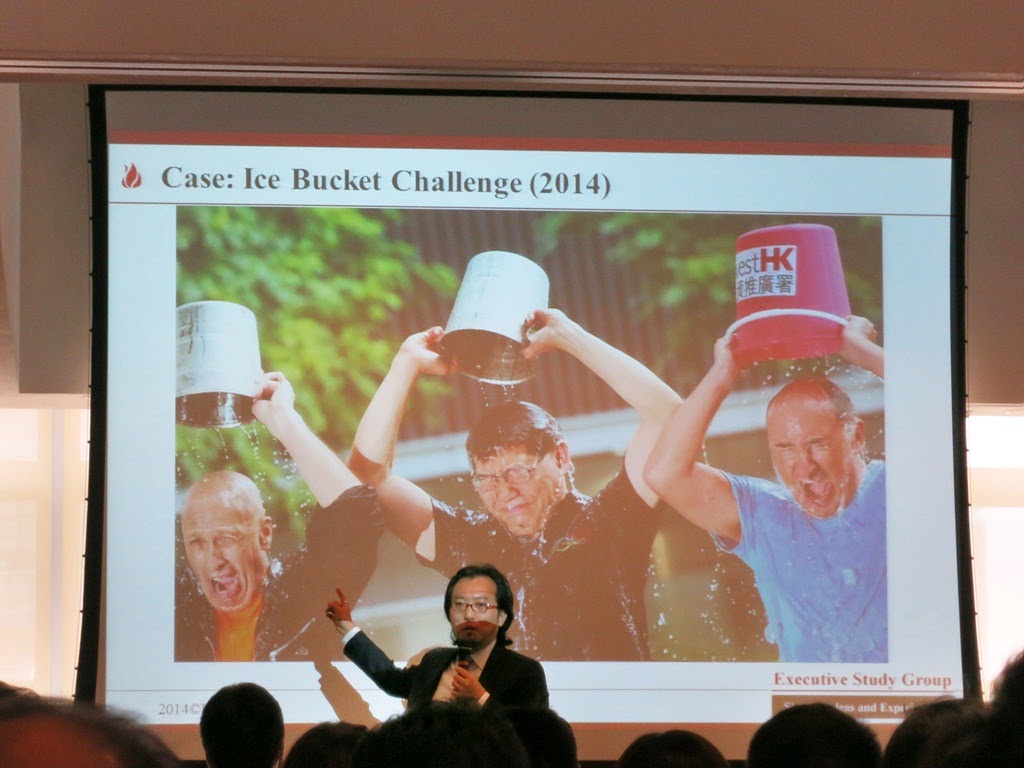 Dr. Lee said Xiaomi smart mobile sales was number one in China. The top 5 players in China showed that only Samsung decreased, Lenovo, Yulong and Huawei were increased. 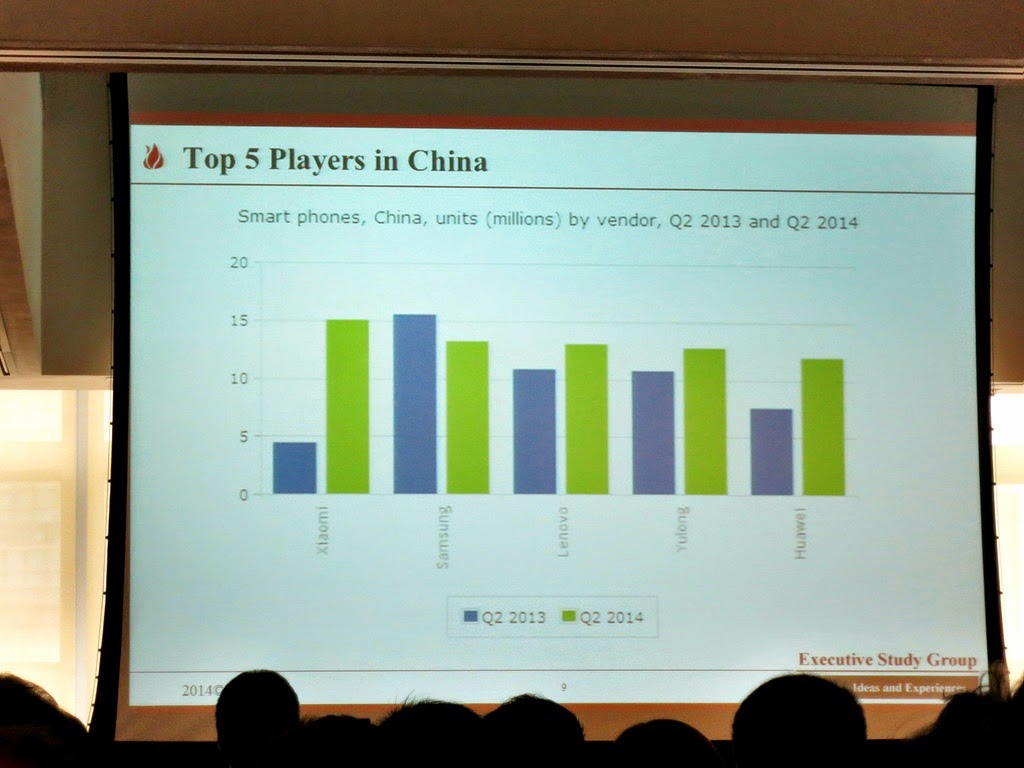 Then he reviewed the top 5 players in the world. Samsung was still number one but no growth. Apple was number two with little bit growth. However, Xiaomi grew 3 times within a year to the position at number five. 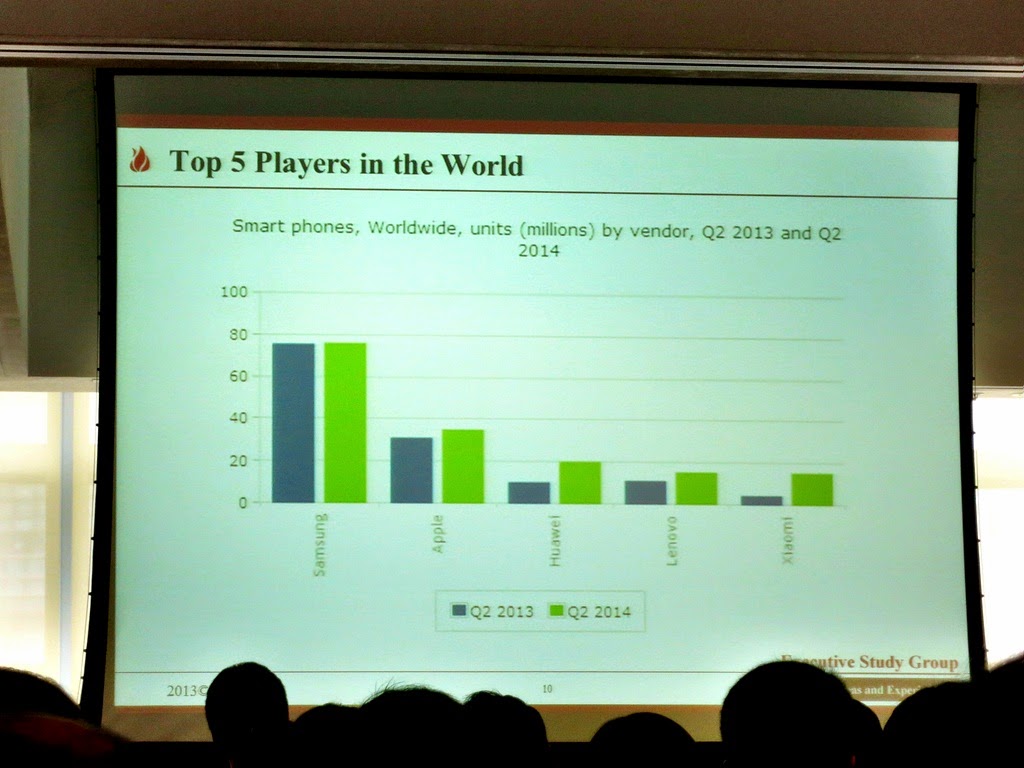 Then Dr. Lee explained Xiaomi Fan-Centric Strategy. Their mission slogan was “Live for fans (為發燒而生)” that they produced the Xiaomi phone because of the Mi-fans. Xiaomi (Logo MI) was not a smartphone company and it founded on 6 April 2010. MI means Mobile Internet (Mark interpreted that MI would not be Samsung but Google!) Their marketing positioning was highest value-to-price ratio.

Through the Fan-Centric Strategy, social media linked Lei Jun (CEO of Xiaomi) to MI-Fans. Lei Jun posted over 100 comments daily through sina Weibo and he had more than 11M fan followed. (More than HK population ~7M!) 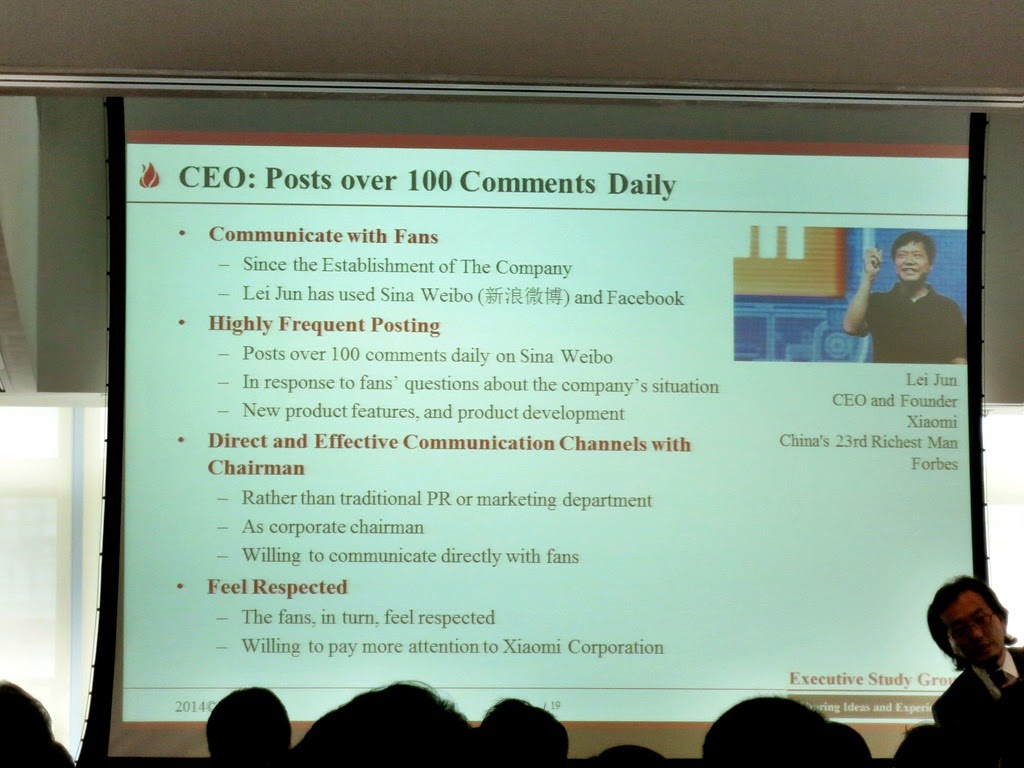 The competitive advantages of Fan-Centric Strategy were free customer research, inter-Fan promotion with no cost and fan volunteer customer service. Through social media and fans activities, Xiaomi was no needed to expense any cost through TV advertisement (where SONY employed HK$514M in TV advertisement for Xperia Z smartphone). Therefore, Xiaomi got many value-added inputs by fans included massive users, free translation, free development and e-word of mouth. 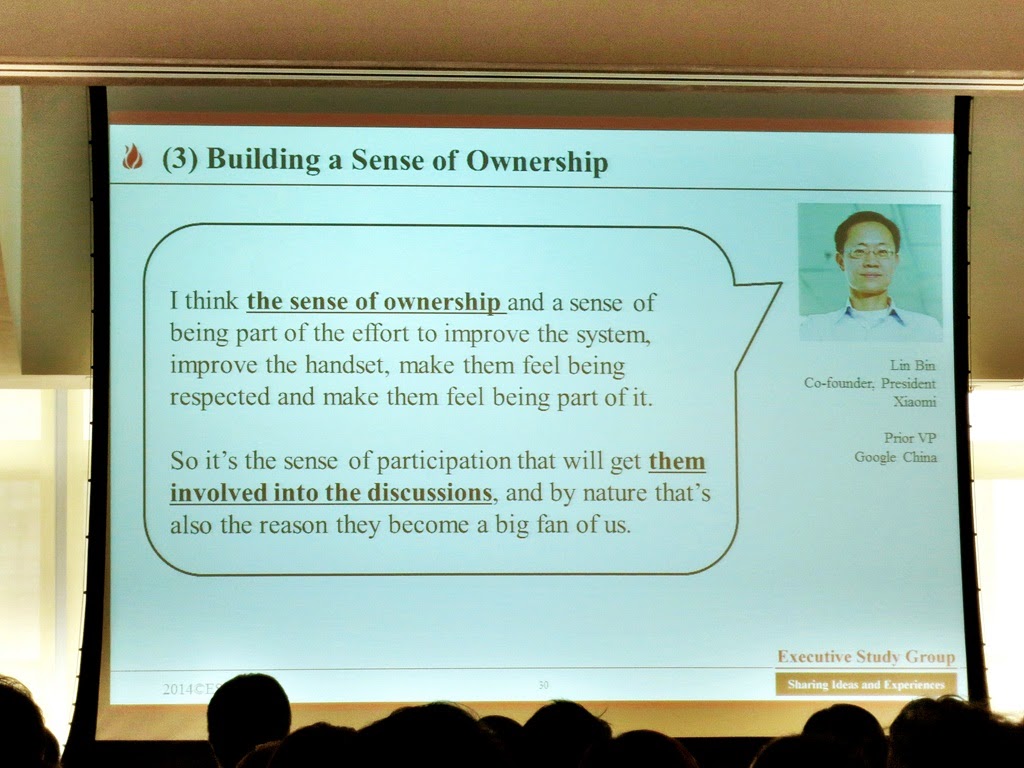 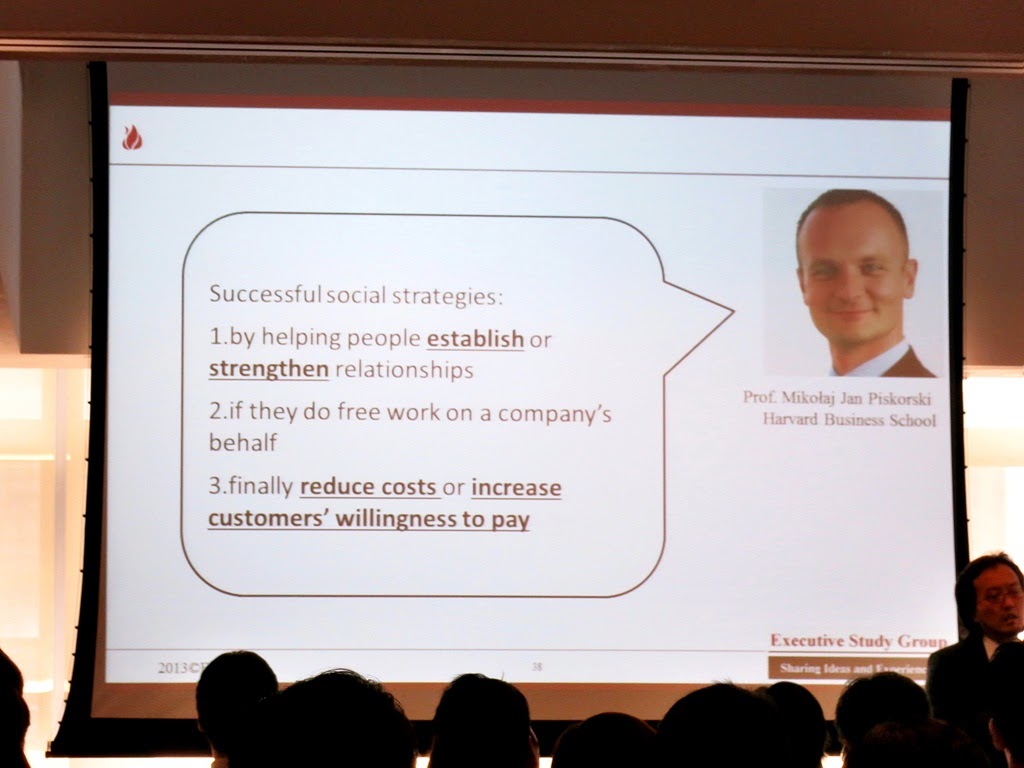 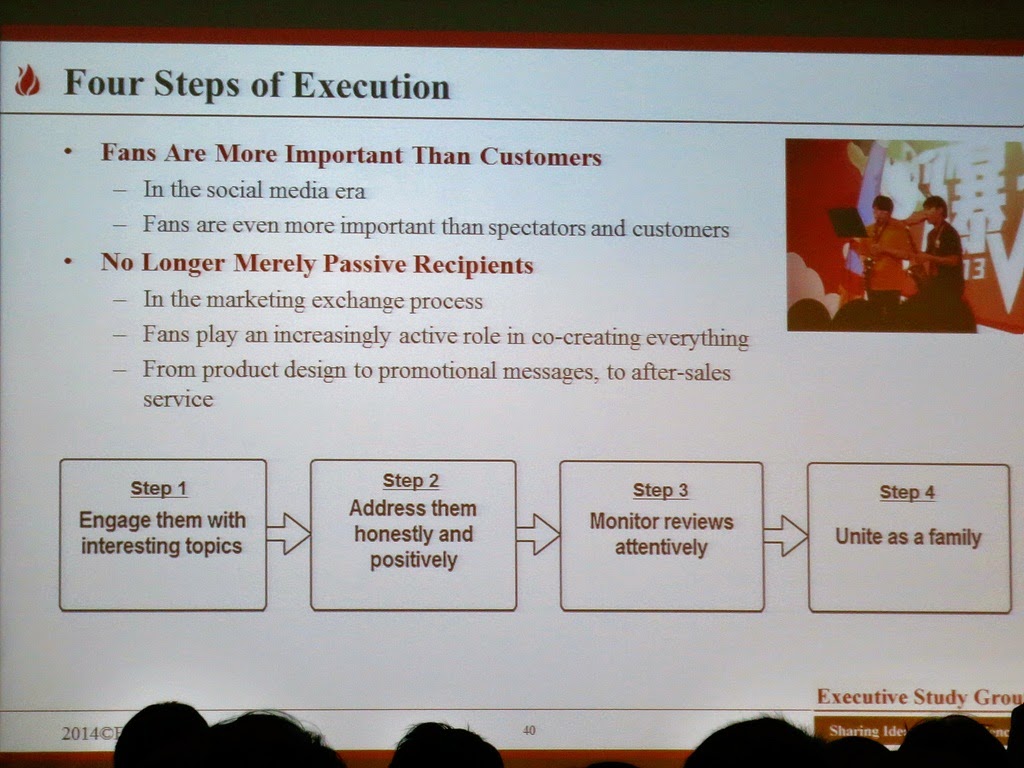 Dr. Mark Lee said Fans become self-started engine for social media and it was important to be integrated with the company strategy for its fans.

Before the cross-Industry sharing, Dr. Lee gave us an exercise to find out two most impressive and one least impressive functions of Xiaomi. And then group discussion was performed. 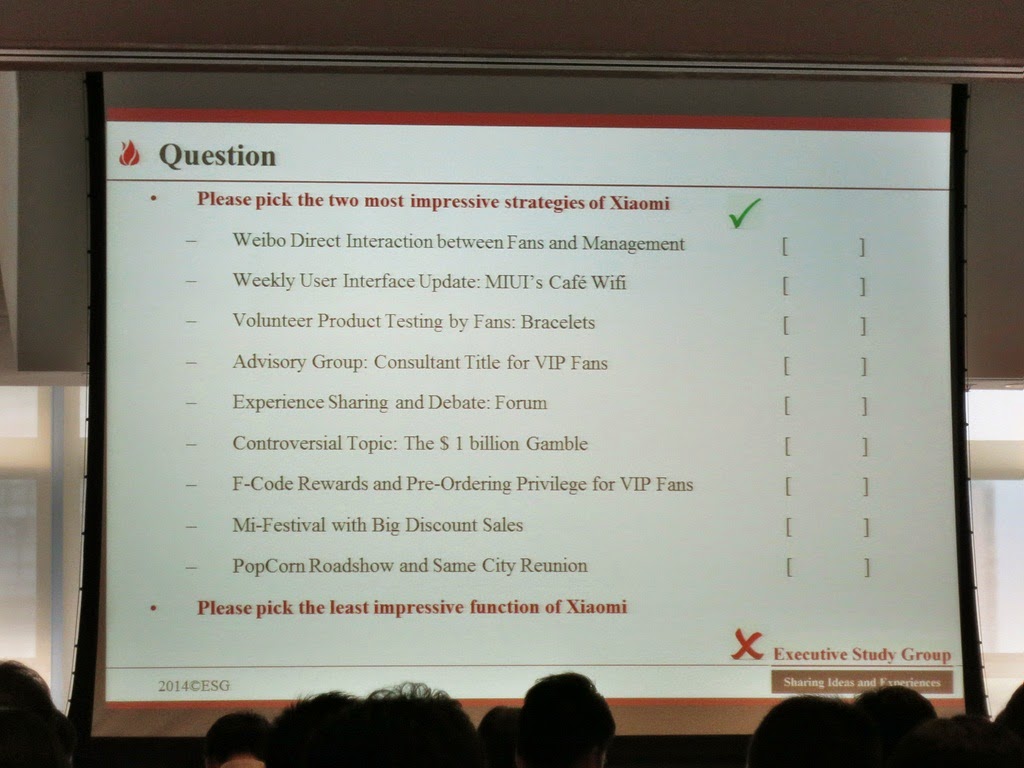